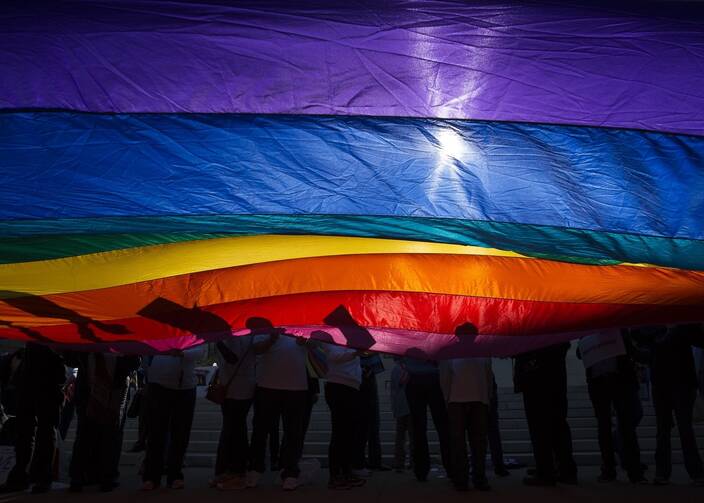 In this 2015 file photo, LGBTQ supporters wave a flag outside the U.S. Supreme Court in Washington. The Catholic Medical Association joined a lawsuit Aug. 26, 2021, challenging the U.S. Department of Health and Human Services' mandate that doctors and hospitals must perform gender-transition procedures over their own moral or medical objections. (CNS photo/Tyler Orsburn)

Today, one of every seven Americans in need of hospital care will receive it in a Catholic facility—a total of nearly 115 million visits to Catholic hospitals each year. They do so knowing they will receive excellent medical care and be treated with dignity, respect and welcome.

As Pope Francis has said, “Every health care facility, especially those of Christian inspiration, should be a place where care for the person is practiced and where it can be said: ‘Here you do not see only doctors and patients, but people who welcome and help each other; here you can experience the therapy of human dignity.’”

That is true for all people who come to us, no matter their age, sex, racial or ethnic background, or religion. It is also true for people who identify as transgender. They will receive the same treatment as any other patient. Catholic hospitals do not discriminate against anyone and to do so would be offensive to the embracing and expansive healing ministry of Jesus Christ. However, if health care facilities are to be places where the twin pillars of faith and science stand together, then these facilities and their workers must not be coerced by the government to violate their consciences.

They will receive the same treatment as any other patient. Catholic hospitals do not discriminate against anyone.

The U.S. Department of Health and Human Services has proposed new rules implementing Section 1557, the nondiscrimination provision of the Affordable Care Act. It rightly prohibits discrimination on the basis of sex in health care. We wholeheartedly support all efforts to ensure that everyone, without exception, receives the best health care that is their due.

However, under this new proposed rule, it would be considered discrimination for a health care facility or worker to object to performing gender transition procedures, regardless of whether that objection is a matter of sincerely held religious belief or clinical judgment. This is government coercion that intrudes on the religious freedom of faith-based health care facilities. Such a mandate threatens the conscience rights of all health care providers and workers who have discerned that participating in, or facilitating, gender transition procedures is contrary to their own beliefs.

People of many faiths, or of no faith yet with deep personal convictions, may find these procedures profoundly troubling, and their constitutional rights deserve to be respected. In a society that protects the free exercise of religion, religious health care providers cannot be expected to violate the teachings of their religion as a condition of continuing their care, and religious health care workers cannot be expected to violate their consciences as a condition of employment.

Does objecting to performing gender transition procedures—but welcoming patients who identify as transgender—constitute discrimination? Of course not.

Does objecting to performing gender transition procedures—but welcoming patients who identify as transgender—constitute discrimination? Of course not. The focus of such an objection is completely on the procedure, not the patient. Prohibiting the removal of a healthy, functioning organ is not discrimination, provided that the same determination would be made for anyone of any sex or gender, which is true at Catholic hospitals.

The proposed regulation does not codify the rights of faith-based providers to decline procedures based on conscience, as other federal laws do. Rather, it holds that H.H.S. reserves the right to decide whether, despite those existing conscience protections, it can force faith-based providers to violate their beliefs. Considering that the government is currently fighting court rulings that held that it violated religious freedom laws the last time it tried to impose a mandate like this, it is reasonable to lack confidence in the department’s commitment to construing these laws to provide appropriately robust conscience protections.

We support H.H.S.’s efforts to ensure all people receive high-quality health care. The church has supported universal health care as a basic human right for more than a century. We have long proposed moral principles for discerning health care policy: It should respect the life and dignity of every person, be accessible to all, honor conscience rights, be truly affordable, and be comprehensive and of high quality.

By the same token, Catholic hospitals and health care workers should not be punished because of their religious convictions or clinical judgments. We urge H.H.S. to reconsider its misguided mandate.

In Christ, God became flesh, suffered, died and rose from the dead. Jesus shows us what it is to be human and how to truly care for others. This vision of sacrificial love and service is our only mandate.

Cardinal Blase J. Cupich, archbishop of Chicago, is the Catholic co-chair of the National Catholic-Muslim Dialogue, sponsored by the Committee on Ecumenical and Interreligious Affairs of the U.S. Conference of Catholic Bishops. 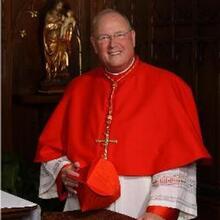 Cardinal Timothy M. Dolan is the archbishop of New York.

@CardinalDolan
Show Comments ()
Join the conversation: Login or create an account
Before you can comment, you need to update your profile to include your first and last name, as required in our comments policy. Then reload this page and you'll be set up for commenting. Update your profile