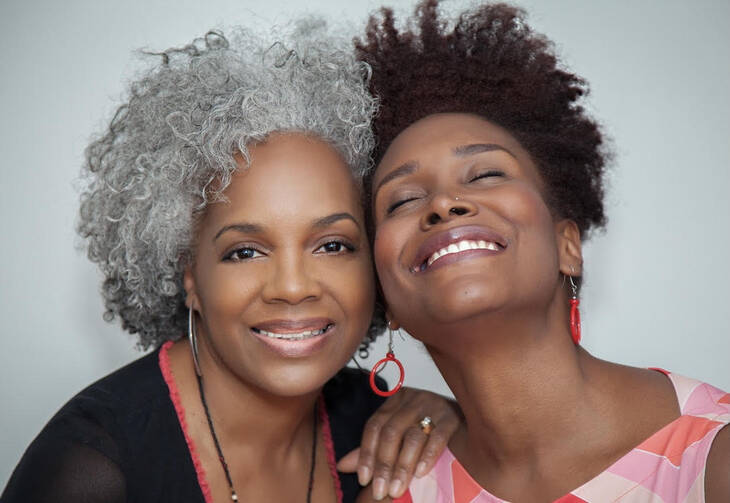 Pamela Ferrell (left) is the founder of Cornrows & Co., a hair braiding salon that has passed along a centuries-old tradition in the African American community. (These photos are the property of Cornrows & Co.)

The Crown Act, which has been passed by 12 states and the House of Representatives, is now heading to the Senate to become federal law. The legislation aims to protect “against discrimination based on race-based hairstyles by extending statutory protection to hair texture and protective styles such as braids, locs, twists, and knots.” And while it may be a start to address the systemic forms of racism that infect our school and workplaces, there’s still a lot missing from the conversation about Black hair care.

This week on “The Gloria Purvis Podcast,” we hear from Pamela Ferrell, a pioneer and advocate in the natural hair care field. When Pamela was only 18, she was fired from her job for wearing braids. So she started Cornrows & Co., a hair braiding salon that has passed along a centuries-old tradition in the African American community.

“The history of hair for Africans in America has been one of control,” Pamela says. It can be traced through the restrictive Tignon Laws of 1786 that forced Black women to cover their natural hair, up to the present, where African hair is still policed by schools and employers across the nation. “Slavery is about ownership of your body,” Pamela says, “and so while we are no longer enslaved, those are the remnants of it.”

For over 40 years, Pamela has been a passionate voice for natural hair care causes and a key contributor in efforts to get states to change outdated laws that impose unfair policies and fines on hair braiding salons. In 2014, the U.S. Army and Navy asked Pamela to advise the military on hairstyle policies. There she shared her discovery of what she calls “circle hair.”

This week on “The Gloria Purvis Podcast,” we hear from Pamela Ferrell, a pioneer and advocate in the natural hair care field.

“I was combing out a client’s hair after shampooing it and there were perfect circles on the floor.” Pamela began collecting samples, measuring them and ultimately using them as a scientific way to describe all hair types by their shape—circle or line hair. “Hair became a visual argument for me,” she says, to unpack the nefarious forms of racism that persist in our institutions and policies but to do so from the perspective of science.”

Pamela also talks to Gloria about how she overcame punitive policies from the Board of Cosmetology and what language we need, in the Crown Act and in society, to better describe African hair.