We know what caused the Colorado fire—and we need to say it: Climate change 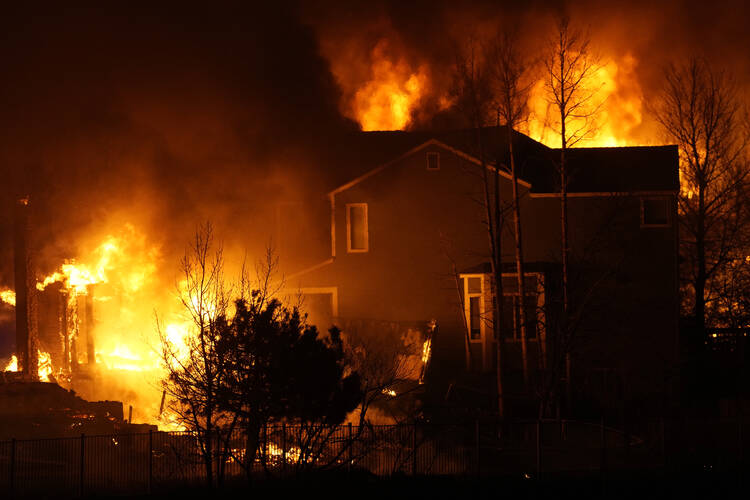 Imagine if a group of foreign conspirators were to drop incendiary bombs on an American neighborhood by piloting a humming drone armada. Somewhere between 500 and 1,000 homes are destroyed. The smoke plumes over a major city, and flames threaten to stir up the radioactive particles in the soil of a nearby retired nuclear facility. Thousands of people, in a matter of hours, see their communities burned to rubble.

Minus the drones and shady foreigners, that was what happened on Dec. 30 in Boulder County, Colo., where I live. I drove my family the long way home, around the smoke, rushing from an aborted vacation to gather some things in case the hurricane-force winds turned the fires northward. Meanwhile, we checked in on friends in the evacuation zones, some of whom would end up losing everything. From the air or on the ground, the scene looked like what we habitually see from abroad: a burning warzone, a dense cityscape dotted with infernos.

The morning after, when the governor and other officials spoke about the disaster, they danced around the causes: Maybe it was a power line downed by the wind. But they wouldn’t rule anything out; they also noted that the winter had so far been snowless. Wind, dryness, tragedy. Of course, they thanked the first responders. (Seriously, thank you.) But the politicians studiously avoided what might seem like “politicizing” the situation: “It’s too early.”

The past several months have been terrifying to anyone paying attention here. No snow. This is Colorado—snow normally starts in October.

What if the drone part were real, though? Would there be any hesitation in saying that we know who is responsible, and we will act, and they will pay? To not name the cause in that situation would be an insult to the innocents who suffered.

The past several months have been terrifying to anyone paying attention here. No snow. This is Colorado—snow normally starts in October. It has been sweater weather since the slow end of summer. The reservoirs have been drying up. More glaciers melted. Pleasant, really, but wrong. It is, simply and precisely, what scientists have warned for decades would happen because of human-induced climate change. Climate change, more than any downed power line or stray spark or arson, is what caused fires to tear through a heavily populated suburb on Thursday. The important cause is clear.

My neighbors lost homes, as so many millions of climate refugees worldwide have before, because our political and economic institutions have failed to respond to a crisis they have long known was coming. Just this month, Congress again failed to pass even an inadequate piece of climate legislation. Real conspiracies of powerful people exist to ensure inaction persists, because it is profitable. Some of these people are foreign, though the greatest failure of leadership is right here in the United States. Our democracy, such as it is, has failed this most basic test. That is why Boulder County, along with so many other homes in so many places, burned: the refusal to care for our common home.

My neighbors lost homes because our political and economic institutions have failed to respond to a crisis they have long known was coming.

Why can’t we name the cause? It is always harder when the cause is partly us. Really, it is mostly not us; most Americans would love to see strong climate action. The challenge, though, is metaphysical as well as political.

In the Metaphysics, Aristotle famously describes four causes—four different, often simultaneous, ways of understanding what makes things happen. The easiest kind to grasp is the efficient cause: the drone pilots, willfully dropping bombs. But no less relevant are the other kinds. The pilots’ ultimate, conspiratorial objective is the final cause; the plan the pilots followed is the formal cause; and the napalm in the bombs is the material cause.

Some causes are more responsible than others. Few will blame the napalm more than the people who used it. The plan on a piece of paper can’t be blamed. The participants’ eventual objective may even seem noble, even if the tactics are repugnant.

In Colorado, what is speakable today is the material cause (the wind and kindling); perhaps, they say, there is an efficient cause—some arsonist—but likely not. Neither of these are as important as the formal and final causes: the changing climate and the economic order that our institutions have privileged above stewardship, respectively. Without those causes, a fire like this would be far, far less likely to occur. In their politic, no-finger-pointing way, the authorities say this already.

Dec. 30 insists that democracy as we know it has failed already and did so long before the mob at the Capitol.

Why would we so unhesitatingly point fingers at the foreign drones but not at the agents of climate change? Why is it too early to say what must be said? The most important facts in this case are already on hand. There should be no hesitation.

The fires still smoldering in my community are the result of an attack. The causes are human, regardless of how the first spark lit. They must be named and confronted if we are ever to have a democracy capable of meeting its most basic responsibilities of protection and accountability. As Jan. 6 approaches again, we will see a lot about that kind of threat to democracy. But Dec. 30 insists that democracy as we know it has failed already and did so long before the mob at the Capitol.

Surely no oil executive or corrupt politician outright wanted to burn my county. I can only hope they are saddened like the rest of us. But it is not playing politics to recognize that causes are still causes even when they are not caused in that specific way. We already know the cause that matters.

Want to discuss politics with other America readers? Join our Facebook discussion group, moderated by America’s writers and editors.