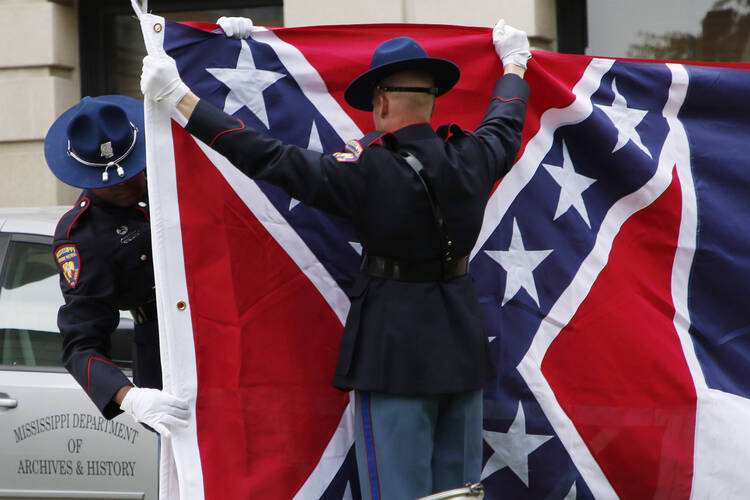 A Mississippi Highway Safety Patrol honor guard folds the retired Mississippi state flag after it was raised over the Capitol grounds one final time in Jackson, Miss., on July 1. (AP Photo/Rogelio V. Solis)

“This brought tears to my eyes,” my closest friend from high school texted to our circle of high school friends. Attached was a cellphone video. Earlier that day, Gov. Tate Reeves had signed into law a bill that made Misssisippi’s longtime state flag no more. (A commission will be tasked with coming up with a replacement, which would have to be approved by voters this fall.)

The minute-long video shows the voided flag being lowered from the Forrest County Courthouse in Hattiesburg for the last time. The two white men doing the deed move briskly and unceremoniously—“Let’s be done with this,” they seem to think—and as the flag reaches the pole’s base, a crowd of bystanders, nearly all African-American, erupt in applause.

As the flag reaches the pole’s base, a crowd of bystanders, nearly all African-American, erupt in applause.

And just like that, it was done. Changing the Mississippi flag had been a long fight that always struggled to gain momentum. There was the 2001 statewide referendum, the second election I ever voted in, in which nearly two-thirds of voters chose to keep the flag that was adopted in 1894, with the Confederate stars-and-bars in the upper left quadrant. Those who wanted to change the flag argued that it deterred corporations from locating in Mississippi. But a white lawyer named Greg Stewart, who had led the 2001 fight to retain the flag, told The New York Times: “The economic argument didn’t work because they could never name a single business that left the state of Mississippi or didn’t come here because of the flag.”

But in 2020, there was a single business. The Southeastern Conference announced on June 18 that it would not hold another championship event in Mississippi as long as the Confederate battle emblem remained on the flag. It then took the Mississippi legislature less than two weeks to do what years of campaigning and a referendum could not. Turns out, college football is even more precious to white Mississippians than emblems of the Old South.

Turns out, college football is even more precious to white Mississippians than emblems of the Old South.

As my high school friend, Reggie Houze, watched the flag come down over our hometown courthouse, he was thinking of his grandfather, the Rev. Sam Hall. Fifty-nine years earlier, on the last day of January 1961, Hall had entered that same courthouse and attempted to register to vote. His application was denied, of course—as a black man, he was deemed too uneducated to vote, even though he had a college diploma. The white farmers who applied to vote the same week were quickly registered, despite their inability to fill out the form without help from a clerk.

Hall became a key witness in a landmark voting rights case, which the U.S. Justice Department under President John F. Kennedy argued in Hattiesburg and won, allowing him to cast a vote for the first time in 1964. He was 48 years old. His case became the model the Justice Department used to win other voting rights cases throughout the Jim Crow South.

Oddly, Reggie’s grandfather never once spoke to him of this history, nor was it something talked about openly in Hattiesburg or taught in school. Reggie and I have often mused about this: Why the silence?

Reggie’s parents and grandparents had made big strides in their lifetimes but always within a world controlled by whites.

Reggie says he only recalls two childhood conversations in his house about race. The first was about his Aunt Bell, who, like all the women of his family in that generation, was employed by white families as a domestic worker. Aunt Bell had been forced to spend two days tearing apart the house of the family she worked for, searching high and low for a cheap hair barrette that belonged to the family’s young daughter and had gone missing. Reggie’s grandmother shook her head as she told the story as if to say, “The indignity of it.”

The other thing his grandmother had told him was, “Always have you some good white friends.” Reggie’s parents and grandparents had made big strides in their lifetimes but always within a world controlled by whites. Maybe they appreciated the freedoms they’d won and did not want to jeopardize them by rocking the boat. Thus, they never spoke of their role in that historic voting rights case—nor of Vernon Dahmer, the civil rights activist assassinated by the Ku Klux Klan in his Hattiesburg home in 1966. I don’t recall Dahmer’s name being mentioned in any civics or history class in my schooling. I am ashamed to say I didn’t know anything about his life and legacy until well into my adulthood, even though I frequently passed the site of his home in my youth. It just wasn’t talked about.

Nor were stories told about the daily indignities suffered by the parents and grandparents of my Black classmates: being relegated to the balcony of the Saenger Theater for a Friday night movie; not being allowed into most restaurants and stores in town; and being issued textbooks in the Black public schools that were outdated hand-me-downs from the white schools (they had been sent up to the Mississippi State Prison for rebinding and had “Parchman Penitentiary” stamped on the title pages).

The Mississippi of the ’80s and ’90s was far from perfect, but things were much better than they had been. Still, there was the sense of “Don’t rock the boat.” That applied to the state flag: “Just let it be” was the attitude of many Black Mississippians.

“It was the American flag that meant something to me,” another member of our high school friend group, Shonna Brown, recently told me. “Not the state flag. I remember feeling, even from when I was young, that it represented something that didn’t want me.”

Her family had left Hattiesburg and migrated north to escape Jim Crow Mississippi. Her stepdad served a career in the U.S. Army before retiring back in Hattiesburg, and he also disliked the old state flag. But Shonna never acted much upon this feeling. “We had it pretty good growing up, and maybe we just wanted to pretend the bad side wasn’t there. It’s not to say we didn’t feel [the bad side]. It was there. I can’t tell you how many times ridiculous stuff happened to me. Being followed, being pulled over and harassed.”

As Mississippi integrated, there were no real efforts to confront its tragic racial history. There were no apologies, no reparations, no atonement. Jim Crow was there one day and wasn’t the next. Time to move on.

As Mississippi integrated, there were no real efforts to confront its tragic racial history. There were no apologies, no reparations, no atonement.

But the equilibrium that followed was unstable and really not an equilibrium at all. It ignored the persistent effects of this awful unacknowledged past, the injustices and inequalities that Black Lives Matter has made us all more conscious of. “We didn’t know as much 20 years ago as we do now,” Reggie told me. “And as [my] Granny used to say, ‘Once you learn better, you do better.’”

We do have a good number of white classmates and friends in Hattiesburg who have always opposed changing the state flag, and did so this time around. A white woman, a prominent member of the church I grew up in, lamented the change in a Facebook post: “So very sad. If you were to read what [the flag] stood for you just might have a different view. Nothing about slavery at all.”

Shonna Brown’s response to such attitudes is empathetic. “I don’t want to deny that there’s a heritage and that that heritage is important for some Mississippians,” she says. “But for many of us, this is a sign of division, not of unity. A sign of divided America, not a union.”

Schools in the North waved the Confederate flag, too. Now I know it wasn’t innocent fun.
William Collins Donahue

Last week, Reggie Houze drove through Tennessee and North Carolina with his 11-year-old son and periodically texted me photos of Confederate flags along the interstate. There are reports of groups, including the Sons of Confederate Veterans, planning to replace every dismantled Confederate monument with a Confederate flag on a prominent piece of private property that cannot be touched by state laws or protesters. One of these flags is massive and brightly illuminated against the night sky. “It is a ghastly sight,” Reggie said over the phone. “It would be like driving the Autobahn and seeing a Nazi flag.”

If Americans whose parents and grandparents and great-grandparents shudder when they see this symbol, all Americans should shudder, especially we white Southerners. We should be ashamed that this symbol strikes terror in the hearts of our fellow Americans and should do everything in our power to dismantle the injustices that the symbol represents for them. As the Black liberation theologian James H. Cone once wrote, “Most whites want mercy and forgiveness, but not justice and reparations; they want reconciliation without liberation, the resurrection without the Cross.” We’ve learned better, but a lot of doing better lies ahead.