Putin, Trump, Pope Francis and the future of nukes 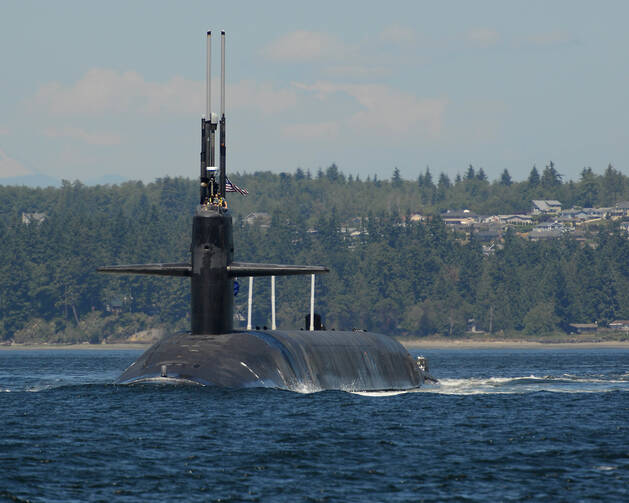 Sub-assurance. USS Maine prepares to transit the Hood Canal as it sails back to its homeport of Naval Base Kitsap in Bangor, Wash. (photo by Petty Officer 1st Class Kenneth G. Takada)

As the Jan. 1 celebration of the World Day of Peace approached, President-elect Donald J. Trump of the United States and Russian Federation President Vladimir Putin crossed tweets and press statements over nuclear weapons—both men appearing to commit their respective governments to a costly modernization and possible expansion of each nation’s already formidable nuclear weapons arsenals.

Meanwhile at the United Nations in New York a historic vote moved the world closer to an abolition of nuclear weapons. The General Assembly voted on Dec. 23 to begin negotiations in March 2017 toward a new international treaty aimed at establishing a “legally binding instrument to prohibit nuclear weapons, leading towards their total elimination.” Those discussions will continue in June and July. The resolution passed 113 to 35, with 13 states abstaining. The nuclear-armed United States, United Kingdom, France, Russia and undeclared nuclear-weapons power Israel voted against the resolution, but other nuclear powers—India, Pakistan and China—abstained.

The International Campaign to Abolish Nuclear Weapons, a civil society coalition active in 100 countries, hailed the adoption of the resolution as a major step forward. “A treaty prohibiting nuclear weapons will strengthen the global norm against the use and possession of these weapons, closing major loopholes in the existing international legal regime and spurring long-overdue action on disarmament,” said Beatrice Fihn, Executive Director of ICAN.

The U.N. vote “demonstrates very clearly that a majority of the world’s nations consider the prohibition of nuclear weapons to be necessary, feasible and urgent. As the United States and Russia are bragging about strengthening their nuclear arsenals, it is time for all governments that are committed to humanitarian law and humanitarian principles to participate in these negotiations to send a clear message that nuclear weapons are unacceptable,” she said.

In his World Day of Peace Message, Pope Francis adds his voice to the increasing international clamor for nuclear disarmament. “An ethics of fraternity and peaceful coexistence between individuals and among peoples cannot be based on the logic of fear, violence and closed-mindedness,” he writes, “but on responsibility, respect and sincere dialogue. Hence, I plead for disarmament and for the prohibition and abolition of nuclear weapons: nuclear deterrence and the threat of mutual assured destruction are incapable of grounding such an ethics.”

Just weeks earlier in Vienna, at the International Conference on Nuclear Security, organized by the International Atomic Energy Agency, the Holy See had expressed its concerns over nuclear proliferation emerging from the current global nuclear weapons regime. Msgr. Antoine Camilleri, the Vatican’s undersecretary for Relations with States, worried on Dec. 6 that among the significant challenges facing “nuclear security” was the “limited, insufficient and often stalled efforts to prevent proliferation and move toward a world free of nuclear weapons.”

He added, “The logic of fear and mistrust that is epitomized by nuclear deterrence must be replaced with a new global ethic. We need an ethic of responsibility, solidarity and cooperative security adequate to the task of controlling the power of nuclear technology.”

The U.N.G.A. vote could not have been better timed, coming just a day after President-elect Trump and Mr. Putin traded comments that seemed to indicate a potential reversal of progress on nuclear disarmament. “The United States must greatly strengthen and expand its nuclear capability until such time as the world comes to its senses regarding nukes,” the president-elect tweeted on Dec. 22.

That comment seemed a response to a statement by Mr. Putin earlier in the day in Moscow: “We need to strengthen the military potential of strategic nuclear forces, especially with missile complexes that can reliably penetrate any existing and prospective missile defense systems,” Mr. Putin said. “We must carefully monitor any changes in the balance of power and in the political-military situation in the world, especially along Russian borders, and quickly adapt plans for neutralizing threats to our country.”

Just a few days later, responding to efforts to seek clarity on his plans for the U.S. nuclear arsenal and what his reaction might be to a more aggressive Russian posture on nuclear weapons, Mr. Trump told a talk-show host, Mika Brzezinski of MSNBC: “Let it be an arms race. We will outmatch them at every pass and outlast them all.”

The remarks by the two global leaders did not sit well with Ms. Fihn, who noted in a statement released on Dec. 23: “This reckless and aggressive behavior by Russia and U.S. President-elect Donald Trump leaves the rest of the world with a simple choice, silently watch the risk of nuclear war continue to rise or take action and prohibit these inhumane and unacceptable weapons of mass destruction.”

Biological weapons, chemical weapons, anti-personnel landmines and cluster munitions are all prohibited under international law. Abolition supporters argue that it is long past time for nuclear arsenals to similarly come under international prohibition, believing that nuclear powers will eventually begin to bend to global will on nuclear weapons once a legal framework which outlaws them is established.

Russia and the United States signed the New START treaty in 2010, capping the number of nuclear warheads and missile launchers each country can possess. The agreement is in effect until 2021. The Obama administration has begun a 10-year “modernization” program that is estimated to cost $1 trillion.

"Modernization is quite different from expansion," Michael McFaul, Obama's ambassador in Moscow between 2012 and 2014 told the Associated Press on Dec. 24. "Modernization is allowed under the New START treaty; expansion is not."

The Obama administration's modernization program has been criticized by U.S. bishops, who co-signed a letter in May arguing that the arsenal upgrade undermines efforts toward disarmament and could lead to a costly arms race. “Spending money we don't have on weapons we don't need won't make us safer,” the letter concluded. “Congress should refuse to fund such dangerous and unnecessary weapons programs.”

Kevin Clarkeis chief correspondent at America magazine and the author of Oscar Romero: Love Must Win Out. Twitter: @clarkeatamerica