Pope Francis: The media needs to avoid the sin of spreading fake news 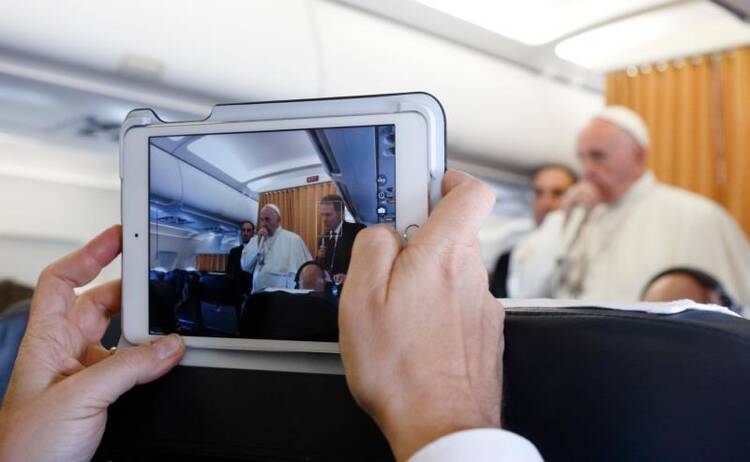 A journalist uses a tablet to photograph Pope Francis as he answers questions from journalists aboard his flight from Malmo, Sweden, to Rome Nov. 1. (CNS photo/Paul Haring)

In a new interview with Belgium’s Christian weekly, Tertio, Pope Francis highlights four temptations faced by the media in today’s world: calumny, defamation, disinformation and “coprofilia,” which, he explained, means “always seeking to communicate scandal, to communicate bad things, even if they are true.”

In this wide-ranging interview, in which he also responded to questions about the links between religion and terrorism, synodality in the church, the jubilee year and much else, Francis spoke forcefully about the use and misuse of the media today. He is very aware of how these means of communication can destroy people’s lives and careers, especially in politics and—though he does not mention it here—also in the church and religious sphere.

His remarks can be read as a forceful appeal to those working in the media—print, television, radio, web and social platforms—to use their influence in a more honest, truthful and transparent manner that fully respects human dignity. Francis emphasized that “they have a very great responsibility” because “they have in their hands the possibility and the capacity to form opinion: they can form a good or a bad opinion.” They can be “builders of society” by promoting dialogue and brotherhood and by making people think and educating them. Indeed, he said, when used well, the means of communication “can edify and do immense, enormous good.”

But given that “we are all sinners,” the pope said, we can also do damage by the way we use these platforms. He drew attention to the fact that the media “have their own temptations,” and listed four main ones.

First, the media can be tempted by “calumny” and so use their platforms “to calumniate and ‘dirty’ people, especially in the political world.” Second, the media can be used to defame another person. He emphasized the fact that “every person has the right to a good name,” even if in their past life they had a problem with the law or in their family life. But, he stated, “to bring this to light today is grave, it does damage, it cancels a person.”

In the case of calumny, Francis said, “a lie is told about a person,” whereas in the case of defamation “a page is shown—as we say in Argentina, ‘Se hace un carpetazo’—something is brought out [in public] that is true but is now in the past.” He said that perhaps one has paid for this crime by imprisonment, a fine or in some other way. Francis declared that “there is no right” to bring all this into the public view and to do so “is a sin and does harm.”

Next, he pinpointed the temptation toward spreading disinformation. He underlined the fact that a lot of damage can be done by disinformation, by which the media “only give part of the truth and not the other” in presenting some situation.

Pope Francis concluded by calling for the media to “be more clean, more transparent” and not to fall into “the illness of ‘coprofilia,’” which he described as “always seeking to communicate scandal, to communicate bad things, even if they are true.”

This interview was conducted in Spanish before the last consistory by the review’s editor, Geert de Kerpel, and its Vatican correspondent, Emmanuel Van Lierde, and can be found in Dutch at www.tertio.be. The Vatican released it today, Dec. 7, in Spanish and Italian.

@gerryorome
Show Comments (
2
)
Comments are automatically closed two weeks after an article's initial publication. See our comments policy for more.
Kevin Murphy
5 years 8 months ago
It was a somewhat strange interview, with some questionable imagery used by the Pope.
Jim MacGregor
5 years 8 months ago
RE: "His remarks can be read as a forceful appeal to those working in the media—print, television, radio, web and social platforms—to use their influence in a more honest, truthful and transparent manner that fully respects human dignity." It would be more useful for them to tell the facts as they know them - who, what, where, when, why, how - rather than disguising personal opinions as news. I can suffer some human indignity if the facts are not to my liking. Jesus suffered human indignity because of his opponents' opinions on the facts that He taught.