President Trump will need prayers and God’s help; so will we 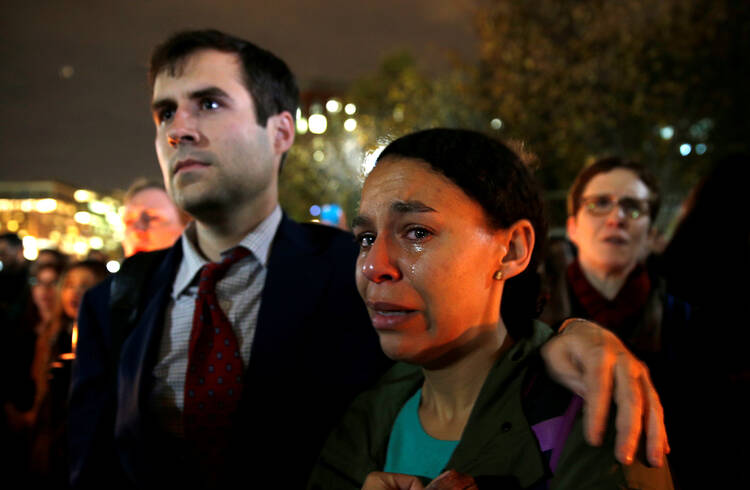 A woman cries while taking part in an anti-Trump vigil in front of the White House in Washington Nov. 9. (CNS photo/Kevin Lamarque, Reuters)

Donald J. Trump is the next president of the United States. Say the words out loud a few times just to let it sink in that the star of the hit reality TV show, "The Apprentice," will now sit in the Oval Office and make judgments that impact the lives of 320 million Americans and hundreds of millions more across the globe. You can shout, "You're fired" back at the screen as much as you like, but on 20 January 2017, Donald J. Trump will be inaugurated as the 45th president of the United States of America.

Mr. Trump is newly converted to the Republican Party and was roundly opposed by principled conservatives. But he will nevertheless be a Republican president sitting in the White House with a Republican Congress ready to pass his legislation.

Democrats are suddenly out of governing control of both executive and legislative branches, and they are poised to lose control over the judicial branch (which should never have become so politicized in the first place). Needless to say, the liberal establishment is still in shock. We immediately saw the #NotMyPresident hashtag trend for hours as millions of Democrats vented their spleens about how they would not recognize Mr. Trump's legitimacy as president, and later, street protests raged against the dying of the light.

As a conservative who has spent the last year opposing Donald Trump, I have some advice for my friends to the political left of me. Don't play the game in which you reject the legitimacy of Mr. Trump as president.

I still think he is unfit for office. But the American founders knew they were building a Republican system that would check executive power. In fact, were it not for the immense admiration the founders had for George Washington, the United States might not even have had a president.

President Washington then set the standard for a limited executive power, giving it up after eight years. At the end of the 20th and the dawn of the 21st century, we have experienced the expansion of the executive power. Some have called it the cult of the presidency or simply the imperial presidency. Liberals were happy when Barack Obama was the emperor but now are besides themselves at the prospect of Donald Trump wielding that same power. My advice to liberals is simple: Recapture a belief in limited government, separation of powers and civic responsibility to resist unjust laws.

Intelligent conservatives did an enormous amount of soul-searching this year. I really hope intelligent liberals will start doing the same. Maybe ditch the whole progressive project to transform traditional faith? Stop promoting abortion? Knock it off with the identity politics? Stop calling anyone and everyone who supports traditional values a bigot and deplorable. Remember that history doesn't have sides, and nothing is inevitable. Having a majority does not make something true or good.

I opposed Mr. Trump in the primaries. I opposed him in the general election. An immoral man of low character whom you should flee at parties and whom you would not let near your daughter is someone all people should have opposed. Mr. Trump's own history and habits should have given all Americans rational pause as to whether his presidency will produce the promised fruit. But nothing would please me more than to be wrong about him.

Mr. Trump is America's biggest gamble. It's worth remembering that it is really only desperate people who are willing to gamble so much. We all must address the real distress that underlies the choice for Mr. Trump. I encourage everyone to set aside thinking that the millions of Trump voters who voted for Mr. Obama twice are racist xenophobes. There are racists and xenophobes. The alt-right ethnonationalists are a small but real presence. They are not how Mr. Trump got elected. Mr. Trump was elected by ordinary Americans, many struggling in the Midwest and the Rust Belt, who have been exhausted by socially liberal elitism and by neoliberal policies that served the 1 percent better than the 99 percent.

Though a dark horse destroyer of norms and conventions, we must pray that Mr. Trump's vulgar ambition and vanity will be a check upon his excesses and that, surrounded by people better than him, his own actions will be turned to the common good. More important, we have to pray that ordinary citizens will turn to the common good as well, working to build a better life on the ground for all our neighbors so that they don't go looking for blunt instruments again.

As an American citizen, I will acknowledge the authority of the duly elected president of United States by resisting him when he acts unjustly and supporting him when he works for the common good of the country and the world. As a Catholic, I will pray for him with fervor, not just because he is going to need God's help but because we are going to need it, too.

C. C. Pecknoldis an associate professor of Systematic Theology at the Catholic University of America. Follow hin On Twitter: @ccpecknold.

C. C. Pecknold is an associate professor of Systematic Theology at the Catholic University of America. Follow him on Twitter @ccpecknold.