What One World Trade Center tells us about ourselves. 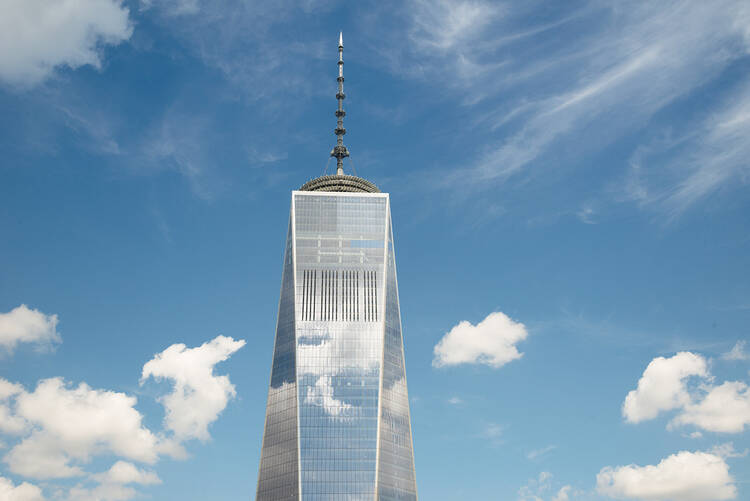 Last September, Pope Francis descended into the 9/11 Memorial Museum and presided over a multifaith prayer ceremony of great breadth and resolve. “We can and must build unity on the basis of our diversity of languages, cultures and religions,” he said. “Together we are called to say ‘no’ to every attempt to impose uniformity and ‘yes’ to a diversity accepted and reconciled.” Alongside leaders from many faith traditions, he prayed before the raw slurry wall that protects the World Trade Center site, its symbolic power never more evident than on that day. In that unforgettable moment, full of grief and hope, a secular museum became a holy temple.

Slurry walls are the massive, watertight concrete walls that encircle the foundations of the entire Trade Center. On Sept. 11, 2001, the original slurry wall foundations held back the Hudson River, which threatened to inundate ground zero and much of lower Manhattan. They became infused with meaning, thanks to Daniel Libeskind, the master planner, who deemed the unlovely walls “profoundly miraculous,” both as the vulnerable remains of the terrorist attacks that day and, planted in bedrock, as a powerful metaphor for American resilience.

They are one of a number of commemorative elements encoded in the nine structures that have arisen in the 15 years since the terrorist attacks of Sept. 11 that illuminate the site’s spiritual dimensions. A commemorative precinct as well as a commercial office development, the new World Trade Center bubbles with holy effervescence.

Echoing that same joy and resolve, One World Trade Center takes the form of an obelisk, a military marker favored by the Egyptians and later adopted by Roman rulers in the first century, which eventually took on religious meaning in Christian Rome. When Sixtus V restructured Rome in the 16th century, he positioned obelisks along the routes to holy shrines, transforming them in the pilgrim’s imagination into symbols of Catholicism’s strength and authority. Years later, the architect Robert Mills brought back the ancient form when he conceived the Washington Monument, which marks the birth of the American democracy.

David Childs, lead architect of the architecture and design firm Skidmore, Owings and Merrill, saw an opportunity in that tapered obelisk profile and incorporated it into his design for One World Trade Center, which is a skyline commemoration of the 9/11 Memorial at its feet. The office tower soars to a height of 1,776 feet, a reference to the year our new nation declared that all were equal. The roofline is accentuated with a six-foot-tall stainless steel parapet that marks the heights of the Twin Towers: 1,362 feet and 1,368 feet. Its square base measures 200 feet by 200 feet, dimensions it shares with the original Twin Towers and with the memorial pools that mark the spots where the towers once stood. It is also the width of a typical Manhattan block, conjuring the fabled street grid that confers order on a city of irrepressible energy and limitless hope.

Mr. Childs’s tower had an impossible task: to stand tall and yet remain humble, to represent all that was lost and reclaimed after Sept. 11. It does this by reflecting everything around it in its facade, which looks like a single sheet of glass from a distance but is actually composed of thousands of window units. Utterly unadorned, the tower appears minimal, but it is not. It changes constantly, assuming over the course of a day every shade of blue, insisting on the present, unrepeatable moment. Much like the city, the building’s truest identity is found in its capacity to absorb, change and endure.

Memory and diversity also inspired Spencer Finch’s art installation inside the 9/11 Memorial Museum, which consists of 2,983 unique watercolors, one for each of the victims of the 1993 and 2001 attacks. The title, “Trying to Remember the Color of the Sky on That September Morning,” refers to the lapidary blue sky that cradled Manhattan 15 years ago. Like a mosaic, the squares are placed in a regular grid on the wall of the repository that holds the unidentified remains of some who died at the site. Each square is uniform in size, a microcosm of the square footprint of the Twin Towers, and painted on paper, a material that recalls life’s ephemerality and the papers that blanketed lower Manhattan in 2001, both those posted by families searching for their loved ones and those that floated down from offices once housed in the towers. Each is a different shade of blue, unique like those who were lost and those who remain.

Soon, St. Nicholas National Shrine will open at Liberty Park, the elevated park that runs the length of the Trade Center’s southern edge. Santiago Calatrava designed the diminutive Greek Orthodox church after the Hagia Sophia in Istanbul, the great domed basilica that melds Eastern and Western Christian thought. The site’s only overtly religious structure, the church is clad in alabaster, which is backlit. At night, it will glow like a votive candle, restating in the language of the sacred the emotion expressed by the illuminated base of One World Trade Center on the opposite corner. The wide staircase that wraps around the church’s exterior was inspired by Psalms 120 to 134, known as the psalms of ascent. This special grouping of 15 songs describes the steps of a spiritual journey—from distress to despair to hope to joy—that ring as true today as they once did for ancient pilgrims who were going up to Jerusalem. Standing atop Liberty Park, one sees a parallel progression: The eye travels over the two dark voids of the memorial pools to One World Trade Center’s glowing base, a journey that moves from death to life, from darkness to light, from despair to hope.

Amid sorrow, anger and every nuance of emotion in between, there is relief that this small patch is nearly rebuilt. Construction and healing continue. There is very little indifference toward the new World Trade Center. Every inch of it has been politicized, scrutinized and criticized—and yet thousands come daily to witness what has been reclaimed there and to rejoice in its beauty and vitality.

Great resistance—to an idea, to a building, to those we deem unlike ourselves—usually means there is something still to understand. The opposite of love, as we know, is not hate, but indifference. This project tells us something important about what human beings are capable of and what is possible when we acknowledge the strength of our diversity. Hope does spring eternal, even and especially when our dreams of equality, peace and unity seem just out of reach.

God is good, all the time. It is the “all the time” part that we stumble on, wanting only light and not darkness. To help reconcile the two, there is a rich inventory of signs and symbols downtown that allow us to reflect on the particular glory of our idiosyncratic species, individuals who are irrevocably bound together, each of us bearing unique gifts and the wisdom to share them, and to see them in others.

Judith Dupré is the author, most recently, of One World Trade Center: Biography of the Building (Little, Brown, 2016).