Don't know what to do about gentrification? Listening is a good place to start. 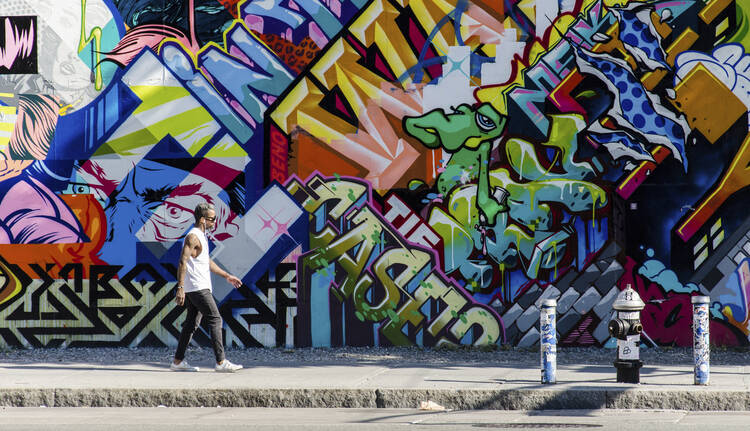 A light dusting of snow has temporarily frozen the inevitable. Splintered wood and blasted bricks are piled dam-like, and an orange crane looms in the corner at the ready. The framing is off and the faded Instagram filter is a bit overwrought (hey, it was 2013), but my partially ironic caption captures well enough how I felt about this recent development: “There goes the neighborhood.”

The neighborhood had actually been going for years, the postwar colonials and ramblers succumbing one by one to every shade of McMansion—those pastel, paneled monstrosities that should exist only on beachfronts for family reunions and college spring breakers. But the dreaded “For Sale” sign had at last reached the lot next to my childhood home, and soon the spacious backyard where Ms. Lilian raised koi and goldfish, where my best friend and I had spent hours playing with Mr. Paul’s dog, would be swallowed up by an eight-bedroom, 6.5 bath.

This was all on my mind as I listened to a podcast released this spring by WNYC, New York’s public radio station, and The Nation magazine, “There Goes the Neighborhood,” about the steady march of gentrification across Brooklyn, N.Y., my adopted home for the past three years. Of course, my suburban Virginia block has not experienced the same massive demographic and socioeconomic disruption currently underway in New York City. But recalling my own bitter resistance to newcomers was a useful corrective to the instinctive defensiveness I imagine many young city transplants feel when talking about this loaded topic. We move to neighborhoods we can afford with our entry-level and nonprofit salaries. Short of leaving New York, it’s not clear what other options we have. And yet, as Emily Wilson, a white, 20-something resident of Bed-Stuy, puts it in Episode 7, “By my very existence here, I provoke changes even if I am not intending to.”

My presence is not exactly going to tip the scales in my historically middle-class Irish- and Italian-American neighborhood (though the recent opening of an organic juice bar is a troubling development). But I’ve also gone to thrift shops in Williamsburg, restaurants in Crown Heights and concerts in Bushwick. Over the past 20 years in each of these neighborhoods, as amenities catering to people like me have come in, longtime residents—mostly low-income African-Americans and recent immigrants—have been pushed out by rising rents.

Each of the podcast’s eight exhaustively researched episodes explores the forces driving this displacement. In some cases, there are clear villains and victims. Tranquilina Alvillar had lived in a rent-stabilized apartment in Williamsburg for 25 years when the developer Reno Capital L.L.C. bought the building with plans to gut-renovate and rent the apartments at market rate. She refused to leave. The landlord made the building unlivable, provoking a vacate order from the city—an illegal but increasingly common tactic. Ms. Alvillar spent the next three years in housing court before she was able to return home. Even then, it hardly felt like a victory. “There are no memories,” she says, choking back tears. “How many things I lose, pictures of my children...for me, memories are more important.”

But often it is harder to pinpoint where individual culpability or agency lies. Race and racism undoubtedly play a role. From the fear-induced white flight of the 1960s to the financial crisis of 2008 that wiped out half the black wealth of this country, “It is not like black people have ever been able to live anywhere we want and feel at home,” says the host, Kai Wright. When a historically black community becomes out of reach for those who fought for decades to put down roots, it is only natural that longtime residents are wary of the new hipster on the block, the laws of supply and demand be damned.

Which leaves us with the vexing question at the heart of “There Goes the Neighborhood”: How do you love your neighbor when your neighbor might have been better off if you never moved in? Listening is a good place to start. A great strength of the series is that no point of view is excluded, from the cutthroat Brooklyn real estate developer to the African-American broker in Bed-Stuy torn about his dealings with an almost exclusively white clientele to tenants of every race, age and background. The podcast is over, but that does not mean the hard conversations about the communities we build should be.

Ashley McKinless is an associate editor of America.

@AshleyMcKinlessmckinless@americamedia.org
Show Comments (
1
)
Comments are automatically closed two weeks after an article's initial publication. See our comments policy for more.
Lisa Weber
5 years 11 months ago
Neighborhoods need to be updated but having someone build what looks like a box store next to your house is no cause for celebration. Neither is having redevelopment make housing unaffordable.