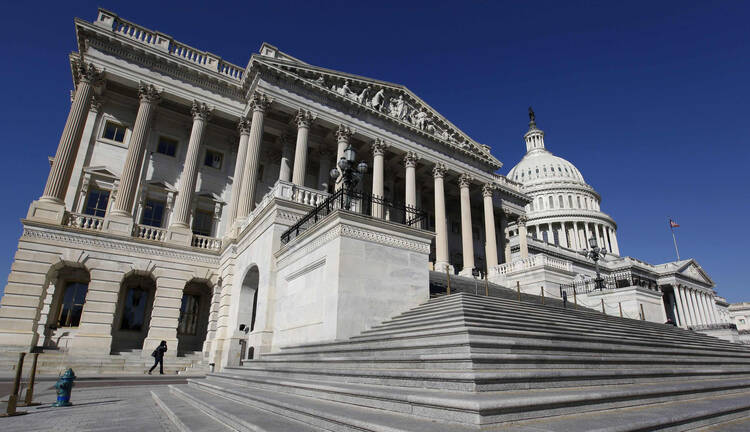 As international pressure continues to mount for serious action on climate change, we should all be thankful for the thoughtful and inspiring words by Pope Francis in his recently published encyclical on the environment, "Laudato Si'." Giving voice to the moral urgency of this issue, the pope has bolstered the arguments of those who labor to wake up our nation and our world to the threats around us.

The scientific community has been sounding the alarm for decades. Our most respected scientific institutions are virtually unanimous in their verdict: carbon pollution from humans’ burning of fossil fuels is warming our atmosphere and oceans, raising and acidifying our seas, loading the dice for more extreme weather, and disrupting the natural systems on which we depend.

America’s defense and intelligence communities warn us of the threats these climate disruptions pose to our national security and international stability.  Our public health officials warn that greenhouse gas pollution and its effects trigger human health risks.

Economists have long recognized the distortion that occurs when energy markets ignore the true cost of carbon pollution. Our government’s own accountants now list climate change as one of the most significant threats to our nation’s fiscal stability. Even the Congressional Budget Office put sea level rise and increased storm activity from climate change into its recent budget outlook.

Voices of many faiths call to us to heed our moral imperatives in protecting God’s creation; seeking justice for all people; and meeting our responsibilities to future generations.

The Dalai Lama has called for us to “develop a sense of the oneness of humanity,” and address climate change. The Archbishop of Canterbury recently issued a declaration warning of the “huge challenge” of climate change, and supporting an international climate treaty to be negotiated in Paris this December. Ecumenical Patriarch Bartholomew has called climate change “a matter of social and economic justice.” More than 350 rabbis have signed a “Rabbinic Letter on the Climate Crisis,” calling for vigorous action against climate disruption and global socio-economic injustice, reminding us that “social justice, sustainable abundance, a healthy Earth, and spiritual fulfillment are inseparable.”

And with "Laudato Si’," Pope Francis, the worldwide leader of the Catholic Church—which is the largest Christian denomination in the world, in the United States, and in my state of Rhode Island—amplified his already sterling record of leadership.

"Laudato Si’" encyclical accepts and affirms what we know about climate change: that most is due to the greenhouse gases emitted by human activity; that seas are rising, oceans acidifying, polar ice melting; that weather is worsening at the extremes; and that basic systems of life on our planet home are being disrupted. “[W]e need only take a frank look at the facts,” Pope Francis writes, “to see that our common home is falling into serious disrepair...things are now reaching a breaking point...humanity has disappointed God's expectations.” The earth herself, he says, “groans in travail.”

“Humanity,” Pope Francis tells us, “is called to recognize the need for changes of lifestyle, production, and consumption, in order to combat this warming or at least the human causes which produce or aggravate it.” And specifically, he says, “technology based on the use of highly polluting fossil fuels, needs to be progressively replaced without delay.”

The pope reminds us that as we in power sleepwalk through this crisis, we are hurting people who have no voice today.

First, we harm future generations, leaving them a world that, to use his words, “is beginning to look more and more like an immense pile of filth.” “[T]he world is a gift which we have freely received and must share with others,” the pope writes. “Intergenerational solidarity is not optional, but rather a basic question of justice.”

Second, Pope Francis emphasizes that when we damage that gift, we inflict particular harm on the poor, who live close to the earth—outside our privileged bubble of consumption. They rely on agriculture, fishing and forestry for sustenance.  As climate change disrupts natural systems, the poor take the hit most directly.

As a result, Pope Francis says, we who have profited most from burning fossil fuels owe a debt to the rest of world—our “ecological debt.” The United States has produced more carbon dioxide than any other nation. Our historical responsibility calls us to help other nations develop cleaner energy, relieve their systematized poverty and soften the blow of climate change.

This responsibility matters particularly for America, the indispensable and exceptional nation. Generations ago, Senator Daniel Webster of Massachusetts described the work of our Founding Fathers as having “set the world an example.” From Jonathan Winthrop to Ronald Reagan, we have called ourselves “a city on a hill,” set high for the world to witness. Should we ignore the climate disruption we have caused, Pope Francis warns,“Those who will have to suffer the consequences of what we are trying to hide will not forget this failure of conscience and responsibility.” He aligns with Daniel Webster’s warning about our American experiment in popular liberty: “The last hopes of mankind, therefore, rest with us; and if it should be proclaimed that our example had become an argument against the experiment, the knell of popular liberty would be sounded throughout the earth.”

Pope Francis’s encyclical even has something to say directly to us in Congress. “To take up these responsibilities,” he writes, “and the costs they entail, politicians will inevitably clash with the mindset of short-term gain and results which dominates present-day economics and politics. But if they are courageous, they will attest to their God-given dignity and leave behind a testimony of selfless responsibility.”

I would urge my colleagues in Congress to remember that Jesus, the Lamb of God, lost his temper only twice: once at the Pharisees, and once at the traders and moneychangers in the temple. If we ignore the call of the pope and of leaders of faith around the world, and choose to protect the side that is polluting and destroying, even when we see before us its ravage of our natural world, its harm to the poor, its robbery of future generations, what are we then?

In the Senate, the hand of greed lies heavily upon us. May the pope’s exhortation give us the courage to stand up against the power of these selfish forces and do what is right for our people and for our planet.

The fossil fuel industry has been a particular disgrace, polluting our politics as well as our planet. Ever since the Citizens United ruling gave polluters the ability to inject unlimited and untold amounts of money into our elections, what one newspaper called a “tsunami of slime” has drowned honest debate on climate change. Senators who once supported common-sense legislation have gone silent as stones under the threat of the polluters’ spending. Getting past the influence of the fossil fuel industry will take courage, especially on the part of the Republican majority whom they so relentlessly bully and cajole. But we must do it. Again, mankind “will not forget this failure of conscience and responsibility.”

In seeking a solution to the climate crisis, Pope Francis asks each of us to “draw constantly from [our] deepest convictions about love, justice, and peace.” He dares us even “to turn what is happening to the world into our own personal suffering and thus discover what each of us can do about it.” He challenges us to recognize that the systems around us are drawing us down a destructive and unjust path. And he proposes another, compassionate path, blazed with abiding faith in the human family, toward the preservation of our common home.

The choice which path we take will be a fateful one.

Sheldon Whitehouse, a Democrat, is a U.S. Senator for Rhode Island.

Show Comments (
3
)
Comments are automatically closed two weeks after an article's initial publication. See our comments policy for more.
Steve Bowler
6 years 6 months ago
With such lofty rhetoric you almost forget that Whitehouse and his party support abortion on demand up to full term, embryonic stem cell research, and same gender marriage, all of which are referenced in "Laudato Si’. Makes you wonder if he read the whole thing?
John Mayberry
6 years 6 months ago
One can only assume he didn't read the entire encyclical. Not sure how Mr. Whitehouse can write an article with statements like the ones highlighted below and be a staunch supporter of abortion, embryonic stem cell research, and the death penalty. "Voices of many faiths call to us to heed our moral imperatives in protecting God’s creation; seeking justice for all people; and meeting our responsibilities to future generations." "In seeking a solution to the climate crisis, Pope Francis asks each of us to “draw constantly from [our] deepest convictions about love, justice, and peace.” He dares us even “to turn what is happening to the world into our own personal suffering and thus discover what each of us can do about it.” He challenges us to recognize that the systems around us are drawing us down a destructive and unjust path. And he proposes another, compassionate path, blazed with abiding faith in the human family, toward the preservation of our common home. The choice which path we take will be a fateful one." Pope Francis also challenges us not to pick and choose which paragraphs to reflect upon, especially to fit an agenda.
norman ravitch
6 years 5 months ago
Please don't expect anything from Congress. Bright people do not run for congressional office. Catholics in Congress tend to be the kind of Catholic John Kennedy was -- a nominal and cultural Catholic rather than a real one. Protestants are even less likely to take these issues seriously, at least those from conservative churches. A few Unitarians and Episcopalians perhaps, but not most Protestant legislators, especially not the large number of Baptists whose sensitivities are found elsewhere. I refrain from getting into trouble by specifying what those sensitivities might be.