Eating the Apple: On being baptized into a technological religion 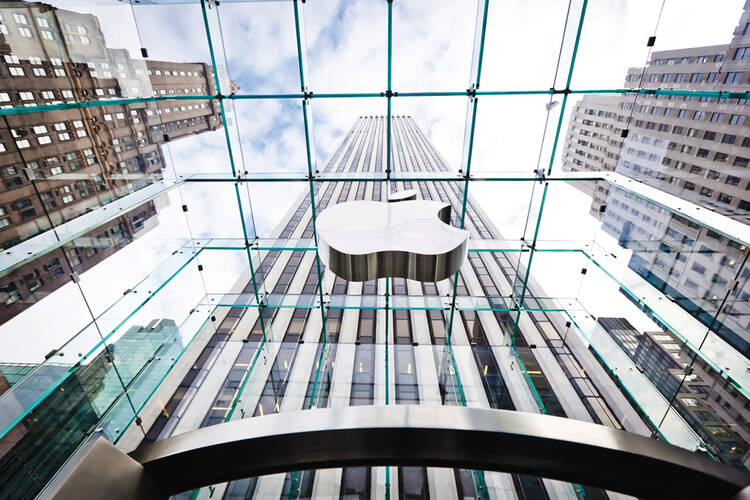 I did not expect to convert. I spent my youth as a committed PC user; I understood technology, could build my own computer and was not going to be shackled to Apple’s attitude of “we know what you need even better than you do.” Yet as I emerged from the strict laptop-less poverty of the Jesuit novitiate and needed to buy a computer, I drank the Kool-Aid: I bought a MacBook.

I told myself at the time that I had not completely betrayed my allegiance to real, geek-quality technology. The new MacBooks ran standard Intel processors, so I still had the option of installing Windows. I never did. Two months later I stood up from my desk, shut the laptop, saw the soothing slow pulse of the sleep indicator and realized I was not going back. I had not worried about my computer for weeks. I knew that when I came back and opened my laptop it would wake up with everything exactly as I had left it, all of it working perfectly. I have not recommended a PC purchase to anyone since that day, and the initial conversion has been repaid with more road-to-Damascus (or Cupertino) moments. My laptop broke in the middle of writing a thesis, and the Apple Store fixed it within an hour. After I showed a friend the four-finger swipe to switch between apps on the iPad, he texted the next day (well, actually, he iMessaged) to say that it had “changed his life.”

Arthur C. Clarke said, “Any sufficiently advanced technology is indistinguishable from magic.” Under the leadership of Steve Jobs, dedicated to making “insanely great” computers, Apple proved something subtly but importantly different: any sufficiently well-designed technology is indistinguishable from reality—it “just works.” We might call it magical when we stop to think about it, but we do not often have to stop to think about it. They got it right. Or, as Jobs himself put it: Design is “not just what it looks like and feels like. Design is how it works.” And it does work, over and over again, exactly the way we want it to.

For those who have seen the light (gently glowing within the Apple logo on the back of every MacBook at the local Starbucks), the experience of using Apple products has conditioned us to expect elegance, reliability and even serendipity in the use of our technological devices. If they are going to surprise us, it will not be with crashes and cryptic error messages, but because they work even better than we thought they would. In other words, we have faith in Apple. Yes, “the substance of things hoped for and the evidence of things not seen” (Heb 11:1). The next time I buy a new phone it will be an iPhone 5S or 6, not because I will have read the reviews or tested it in the stores, but simply because I trust Apple to get it right.

Comparisons of Apple allegiance (or pejoratively, “fanboyism”) to religious devotion are easy enough to find. One of the many, many Apple fan-blogs is called “Cult of Mac.” Apple invented and continues to employ people in the role of “technology evangelist.” In 2012 an anthropologist watching the iPad Mini unveiling commented, “A stranger observing one of the launches could probably be forgiven for thinking they had stumbled into a religious revival meeting.” It has even been proven scientifically: a BBC documentary in 2011 confirmed with magnetic resonance imaging tests that Apple products stimulate in fans the same brain centers associated with religious belief. James Martin, S.J., has compared the response to Steve Jobs’s death to the cult of the saints (“Steve Jobs and the Saints,” In All Things blog, americamagazine.org, 10/7/2011).

Extending the Apple-as-religion allegory works disturbingly well. The cathedrals (Apple stores) have a distinctive sacred architecture, and their clergy (Apple geniuses) wear color-coded vestments (though I still have not figured out which T-shirt color means “I can help check you out now”). The liturgical calendar culminates in the annual celebration of the Worldwide Developers Conference, usually held in early June. There are lower liturgies as well: product launches, days-long vigils in line awaiting new phones or iPads, and “unboxing videos” when they finally arrive. The high priesthood (Apple executives) have hidden and esoteric knowledge (about Apple’s future plans), but they cannot completely defuse crises of faith like concerns over working conditions at Foxconn factories in China or Congressional questions about complicated tax-avoidance schemes. Apple even has a messiah figure in Jobs and his triumphant return to the helm in the 90s, and a passion narrative: Jobs’s battle with cancer was watched by the whole country, if not the world.

Apple and its products inspire devotion, and that devotion shapes our lives at basic and often unconscious levels. I admit with some chagrin that my own hands are better practiced at the swipe that unlocks my iPhone than they are at the beads of my rosary. When I make a retreat and set the phone aside, its absence from my pocket is discomfiting; and when I suggest to students on a retreat that they might do the same, I am confronted with incomprehension: “You’re asking me to do what?”

In his (justly) celebrated commencement address in 2005 at Stanford University, Jobs told the graduates that in order to pursue their dreams, they would “have to trust in something—your gut, destiny, life, karma, whatever.” He spoke about what he learned from getting fired from his first stint at Apple, but even more eloquently about what he had learned by facing the reality of his own impending death from cancer. Calling on the graduates to have courage to live their own lives, he said, “Don’t be trapped by dogma—which is living with the results of other people’s thinking.”

As earnest as Jobs’s advice was, his own contributions through Apple reveal a very different possibility for understanding what dogma really is—a possibility with which religious believers are already familiar. Dogma, as Flannery O’Connor said concerning its effect on writers, does not shackle the mind but frees us to observe; it makes it possible to see further, to grasp what we could not have invented on our own. All of us, Apple fans or not, are now “trapped” by Jobs’s dogma and live with the results of his thinking and his passion for technology that “just works.” And we are better off for it: freer to innovate, to communicate and to imagine how we might use the tools we have been given to change the world.

The dogmatic thinking that convinced us that a phone could (should!) be a sheer piece of glass, that a swipe of a finger on a screen should feel like moving a real object, and that the Internet should be in our pockets has opened up tremendous possibilities. While the App Store may be the most obvious evidence of it, the more profound change is the space that is opened up within consumer culture for products that are more than the sum of their specifications—that are, dare we say it, beautiful, in form and function both.

Believers know—even if they do not stop to think about it very often—that theological dogma works in much the same way. Take, for example, the definitions about the Incarnation: Jesus is fully human and fully divine, and any attempts to focus on one nature at the expense of the other fall into heresy. Far from being a trap, that “constraint” has fired imaginations for millennia. Making sense of it in practice has led not only to theological innovation, but also to the commitment and desire to see God at work in every human life—a beauty that, absent the dogma, would not have been grasped.

St. Augustine described prayer as the “school of desire.” To the degree that devotion to Apple has schooled even our consumer desires toward greater beauty, we may have reason to be grateful. The taste for such beauty in created things can be, of itself, education. It can awaken us to dissatisfaction and restlessness where it is lacking, and help to sharpen and deepen the desire—as it has for me—for that singular Beauty, “ever ancient, ever new.” Perhaps.

Or perhaps Apple’s kind of beauty is a trap, offering satisfaction at the cheap price of $200 and a two-year service contract and anesthetizing our restlessness by distracting us from looking within ourselves or out at the real world. It schools desire only by fulfillment, and not by discipline; it neither strengthens us for justice nor deepens our hunger for love. Perhaps.

Steve Jobs ended his commencement address at Stanford by advising the graduates: “Stay hungry. Stay foolish.” In other words: desire powerfully. Good advice, as Jobs’s life attests. His desire and vision changed the world—or at least the part of it we can see through a touchscreen. Greater changes will require broader vision and bigger hopes to tell us what is worth being hungry for or foolish about, and a better school of desire than anything Apple has on offer.

Sam Sawyer, S.J., talks about Apple from his Apple. View his conversation with Kerry Weber.

Sam Sawyer, S.J., is an associate editor of The Jesuit Post and a student at the Boston College School of Theology and Ministry in Brighton, Mass.