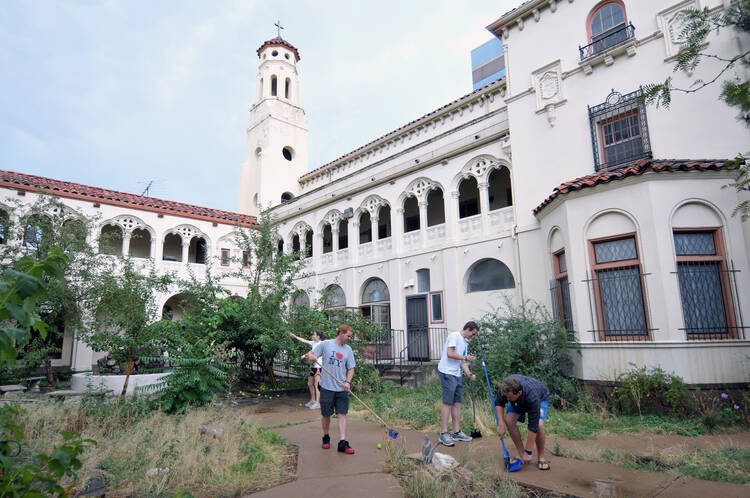 We live in a unique time of possibility and hope. Although the number of women religious is dwindling, they remain the lifeblood of our church, and their convents are holy and fertile ground for new communities of faith. My suggestion: Keep the convents. Open the doors to lay people. Welcome migrants and the homeless. It is a simple plan with a simple mission as old as the church itself: Form local communities of faith where people can practice the works of mercy and grow intellectually and spiritually.

In New York City each night there are approximately 55,000 men, women and children who are homeless. As a housing attorney, I know that thousands more face (and fight) eviction each day. Rather than look to the state to meet the need for shelter, Peter Maurin, co-founder with Dorothy Day of the Catholic Worker movement, suggested that clergy and laity set aside rooms within their own homes for hospitality. Maurin, following St. Jerome, called them “Christ rooms.” The Catholic Worker movement, as originally intended, relied on small acts of service and hospitality by millions of Catholics. Dorothy Day wrote in 1938: “When we succeed in persuading our readers to take the homeless into their homes…then we will be known as Christians because of the way we love one another.”

This call to hospitality is not burdensome, but an opportunity. The Catholic Church is the largest landowner in New York City, and there are nearly three million Catholics in this archdiocese. We have the space in New York—and elsewhere. In many cities across the country, where there were 20 sisters living in a convent in 1980, now there are only two or three. Floors of bedrooms with beds, nightstands, closets and desks are ready for use. Kitchens with industrial-sized pots and stoves with extra burners—all sturdy and scrubbed—are waiting to serve. Bathrooms are ready to offer hot showers. Moreover, convents are often connected with and accessible to parishes, which can offer many resources. The community members could pay (fair) rent, bringing much needed money to struggling parishes or congregations. In this way, we could act as good stewards of the land and safeguard and cultivate the property God has given to the church.

Although convents are equipped for volume and there is a tremendous need for housing, I am not advocating for packed houses. The works of mercy are not “operations” or “programs.” The goal of our work must be love. The community’s growth must be guided by the Holy Spirit and be the result of reflection and dialogue.

Many people in the church have heeded the call to service and justice, but lack community. So we kindly and humbly turn to those religious who have served before us and ask: If you are no longer using the convents and rectories, could lay Catholics help form supportive communities and offer hospitality in these spaces? Lay and religious could live together and learn from one another. In this way, we can create a continuum from strong and vibrant communities of vowed religious to a strong and vibrant community of lay Catholics, and we could discover new ways to conceive of “religious” and “lay.” There may be new kinds of vows and new commitments. The evangelical councils of poverty, chastity and obedience will take on new meaning. Rather than professing lifelong vows, there could be shorter commitments—like two, five or 10 years.

Too often the activities and practices we are called to—like offering hospitality, tending a garden or visiting the imprisoned—are nearly impossible when we must rely on our own resources. In these communities Catholics, working low-paying but critical jobs, could share resources. We could take turns caring for a guest, share the responsibility of maintaining land or share a car, making the burden lighter on each individual. When we share our talents and training (as nurses and doctors, lawyers and teachers, social workers and journalists) with the community, we multiply our resources and increase our ability to serve and work for justice.

Meister Eckhart wrote: “And suddenly you know: It’s time to start something new and trust in the magic of beginnings.” I have been discussing the concept of these communities for years, and have experimented with living out these values in a variety of ways with various levels of support from friends, family and the church. To my great surprise, the idea recently received support from another source. In September, Pope Francis visited a refugee center in Rome and said that empty convents and monasteries should be used to house those in need. These empty spaces, he said, “are not for the church to transform into hotels and make money from them. Empty convents are not ours, they are for the flesh of Christ: refugees.” Once we were overjoyed when the windows of the church were thrown open. Today we are experiencing a new moment in our church: Pope Francis has called for us to open the doors, too.

Karen Gargamelli, a former volunteer with the Dominican Sisters, is co-founder and staff attorney of Common Law, a legal education and services organization in New York City.

Show Comments (
5
)
Comments are automatically closed two weeks after an article's initial publication. See our comments policy for more.
Robert O'Connell
9 years 3 months ago
This is a great -- and very well presented -- idea; Thank you! As the baby boomers age, we will also be dealing with a wave of people needing community services as their spouses and siblings die (and the fewer children we have get overwhelmed).
Chris NUNEZ
9 years 3 months ago
Not only is this a brilliant idea, I was the facility manager at a shelter for battered women in the mid 1980's that was housed in an abandon convent connected to a parish in San Francisco's Ingleside District. The women's organization leased it from the Archdiocese for $1.00 per year. They require lots of work and upkeep, but the payback is tremendous.
LUCILLE BERNIER
9 years 3 months ago
It is easy to be enthusiastic about this idea ! I'll bet a lot of women religious would be on board. It could help to fill the 'community gap' in many parishes, and bring together people of good will. It would take a lot of experimentation to work out the details, and no two projects would be alike, but it seems likely to benefit both the religious and the lay people working with them, as well as the refugees or people needing housing.
Susan Wilcox
9 years 3 months ago
Option for the young?
nabil mubarak
6 years 2 months ago
We are financial builders and we give out no credit check loans to everyone ranging from personal, commercial, business loans with our amounts ranging from min $5,000- max $10,000,000 with a fixed and very low interest rate of 3%. Do you want to own a company? Do you want to own a Home? Is Your Company having financial problem? Do you have a contract/project and need money to fund it? Apply for a loan today and get financed within 3-4 working days. HOW TO APPLY: send us the below information through e-mail ( gaincreditloan01@gmail.com ) Your Name:............... Your Country:............... Your Occupation:............... Loan Amount Needed:............... Loan Duration............... Monthly Income:............... Your Telephone Number:..................... Business Plan/Use Of Your Loan:............... Contact Us At :gaincreditloan01@gmail.com