My 'Marython': Running with Our Lady through the streets of Liverpool 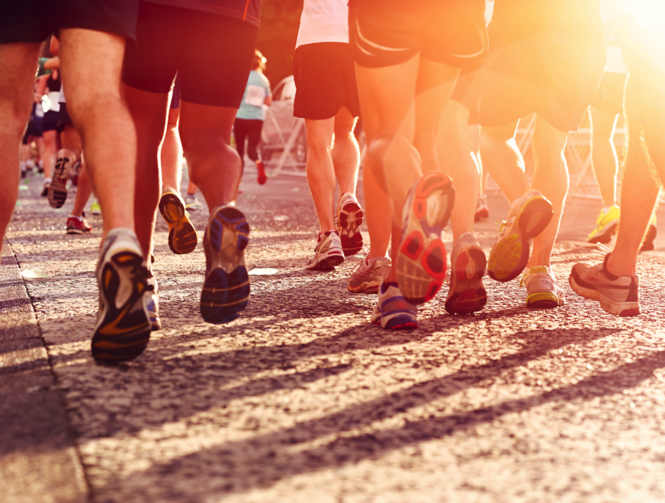 Some years ago I spent a morning in an MRI machine, looking at an image of the Blessed Virgin, while being periodically electrocuted by a team of Oxford neuroscientists. They were investigating whether religious devotion really does help believers to endure suffering. (Think of St. Lawrence teasing those griddling him: “Turn me over! I'm done on this side!”) I understand that this experiment—which compared the pain thresholds of Catholic and atheist subjects—lent some support to the hypothesis.

I think back on this rather unusual experience as I train, painfully and falteringly, for what I have taken to calling my "Marython." I am aiming to pray the rosary for about four or five hours straight, while—God willing—I complete my first full marathon. And I am going to do it on New Year's Eve, along the windswept—and oftentimes rain, snow and/or sleet-swept—docks of Liverpool. Beatles fans may recall George Harrison's relief at the end of a “long, cold, lonely winter” in Here Comes the Sun. He wasn’t kidding.

So why do it? As readers of The Canterbury Tales will be well aware, the motivations for such "spiritual exercises" are often decidedly mixed. Mine are no exception. A large part of it is simply the desire to have done a marathon. I have signed up and trained for marathons several times now, only to pull out of the race because of injuries. (“Boston, London, Berlin... you've cried through them all,” my brother-in-law so sensitively puts it.) This was one last try to satisfy that ambition and I called—frivolously and selfishly, perhaps—on the patronage of Mary, Our Mother of Perpetual Help, to keep me injury-free.

But just like those who decide to walk Spain’s Camino de Santiago as a cheap holiday, but who find they become genuine pilgrims along the way, I have discovered that my Marython is more than just a big run.

The fact is, I am not much of a pray-er. I never have been. Just as in every other area of my life as a Christian, I am far better at the theory than the practice. As an academic theologian, I can give a decent commentary on Paul's injunction to “pray without ceasing” (1 Thes 5:17). And when St. Louis de Montfort tells us, “the Rosary is a priceless treasure which is inspired by God,” I am in fulsome agreement with him. Yet the rosary in my wallet is more often used to distract our two-year-old from singing The Muppets theme song during Mass than it is for actually praying. As St. Ignatius of Antioch once remarked, “It is good to teach, if he who teaches also acts.” Incidentally, that is another central Christian precept that I am rather better at teaching than I am at acting upon.

Other contributors to America have written eloquently of the compatibility of praying and running. And they are quite right. In the early church, those wanting to pray more might go into the desert, or to an uninhabited island, and devote themselves to painful ascetical practices. Jogging three or four times a week scarcely puts one in the league of St. Anthony of Egypt or St. Cuthbert of Lindisfarne. But quiet, solitude and corporal mortification—a traditional recipe for a life of prayer—are hardly unknown to the long-distance runner. And as long as I force myself to leave my iPod at home, there is not much else to do while slogging through a 13-mile training run than to try to pray. Not even forgetting to take an actual rosary along is a serious impediment. While ten fingers cannot reproduce the entire back catalogue of Taylor Swift, they can function quite admirably as a makeshift rosary.

All that said, for “everything there is a season” (Ecc 3:1), and the time for marathon running is generally not autumn or winter. English weather can be miserable at the best of times. As I write this in late October, the country is experiencing its worst storm in several decades. As much as I am feeling the benefits of prayer and exercise—and I am—part of me would much rather be back in my warm, cosy MRI machine than venturing out tomorrow morning. But that simply is not an option. And that's because of my final reason for doing this Marython.

Back in July, I was fortunate enough to spend a week in Manila, the capital of the Philippines. Manila is a delightful city in many ways but it has its problems, and one of those is child poverty. Even driving through the city it is not uncommon to meet street children—some little older than my own Muppets-at-Mass-singing toddler—begging for change at intersections. On my last day, however, I dropped by the National Shrine of Our Mother of Perpetual Help, a huge, perpetually packed church run by the Redemptorists. The Shrine is a major site of Marian devotion, with a perpetual novena every Wednesday, and receives thousands of prayer requests each month, especially from Filipinos working overseas. As I discovered, it also operates a large number of outreach programmes, including one devoted to kids like the ones I encountered on the streets. The Sarnelli Center for Street Children works mainly with abandoned boys aged 8 to 16, providing them with food, shelter, medical care, counselling, education, recreation and, above all, a safe and loving community in which to grow and thrive.

I had the vague idea to do a Marython before going to Manila; I had even, albeit a bit half-heartedly, begun training for it. But after visiting the Shrine, and hearing of its work, that was that. A Marython that had largely begun as a whimsical, piously self-indulgent enterprise—and it still remains both of those things—has become something rather more significant: an attempt to do something, however small, for some of Christ's "littlest ones" (Matt 18).

The basic idea is very simple. Dorothy Day was fond of saying, “It is by little and by little that we proceed.” 26.2 miles is made up of lot of little steps, just as a full rosary is made up of a lot of little prayers. Accordingly, I am hoping for a lot of little donations. I have asked those who read or hear about the Marython, and who think it sounds like an interesting or worthwhile idea, to consider donating just $2 to support the work of the Sarnelli Center.

St. Josemaría Escrivá once asked, “Have you ever stopped to consider the enormous sum that many ‘littles’ can come to?” An 'enormous sum' might be bit optimistic, but even a modest one will keep me going on a bleak morning in Liverpool. And it will give me lots of cherished people to pray for as I do.

Stephen Bullivant is Senior Lecturer in Theology and Ethics St. Mary’s University College in London, England. Regular updates on the progress of the Marython are available at https://www.facebook.com/marython2013. To make a donation to The Sarnelli Center for Street Children, please visit http://www.justgiving.com/marython2013.