The Restoration of St. Patrick's

On March 17, 2012, Cardinal Timothy M. Dolan of New York unveiled ambitious plans to restore St. Patrick's Cathedral, which he described as "America's parish church and the soul of the capital of the world." The restoration is projected to cost roughly $175 million and to be finished in December 2015. The folks at St. Patrick's were kind enough to give me a behind the scenes (or, rather, up in the rafters) tour of some of the renovation projects inside the church. 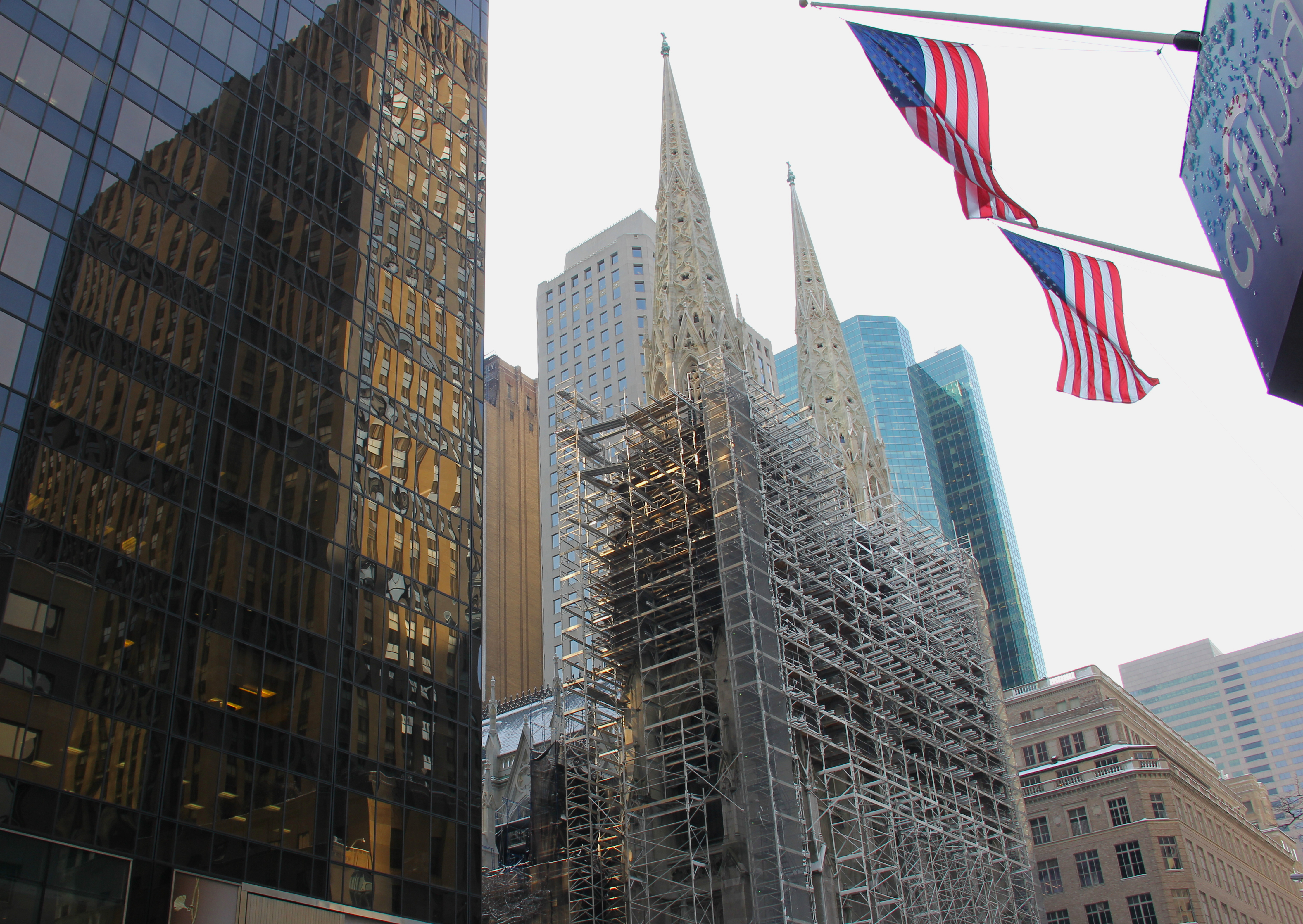 Phase one of the project, cleaning the exterior of the 80-foot spires, was completed last year and the scaffolding that covered the tops of the cathedral's towers has been removed. 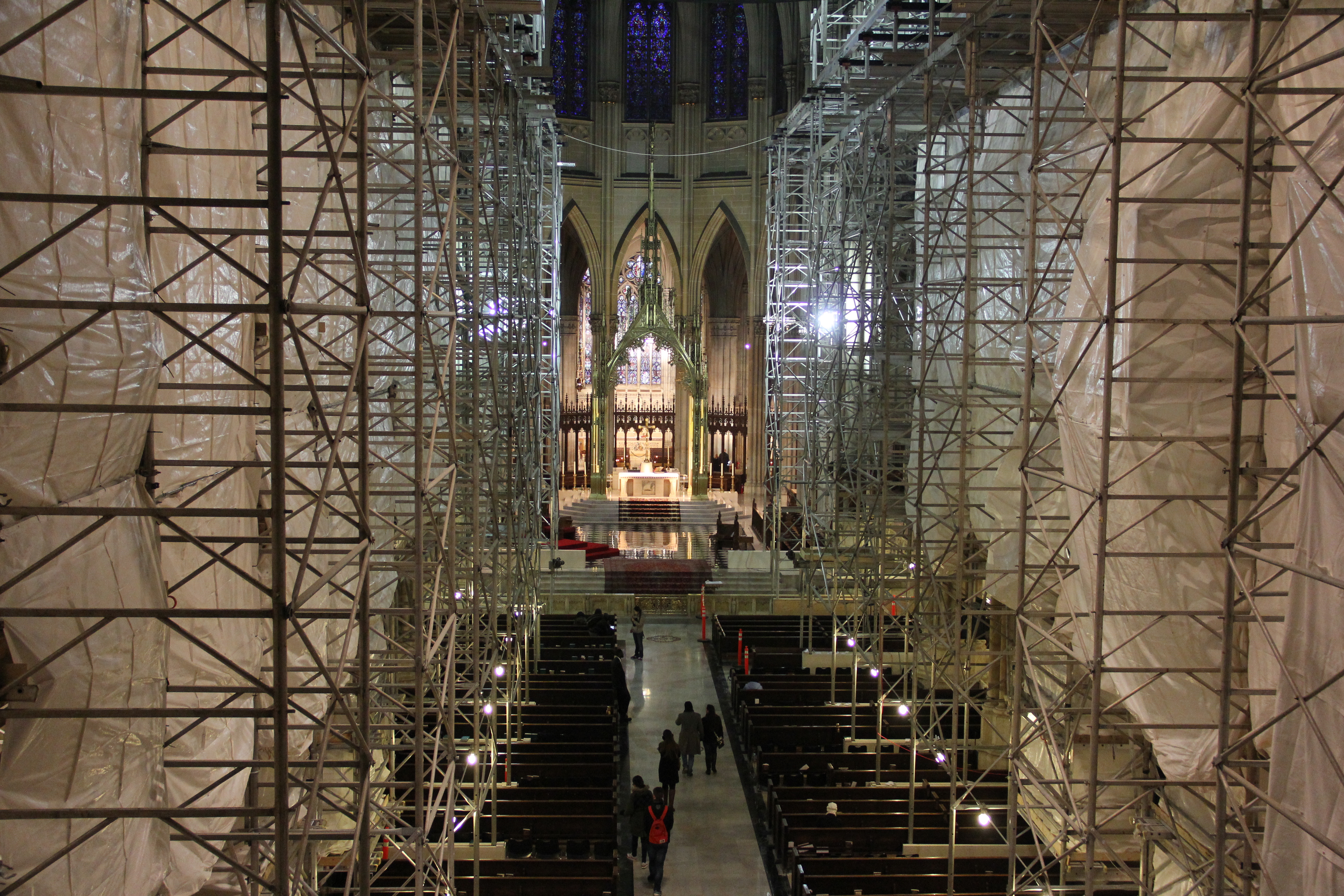 While scaffolding covers much of the church's interior, it has remained open to churchgoers and tourists alike throughout the restoration. 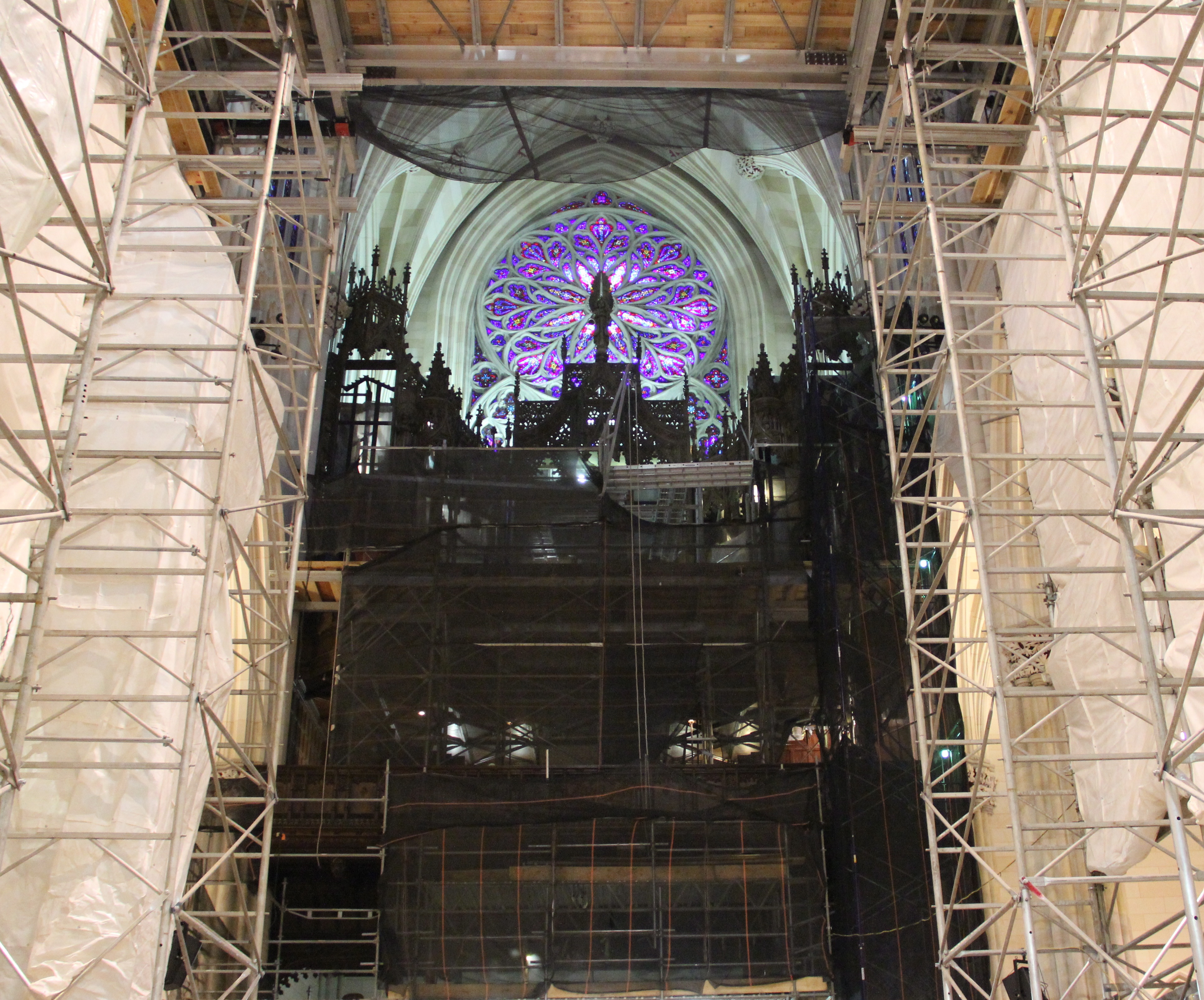 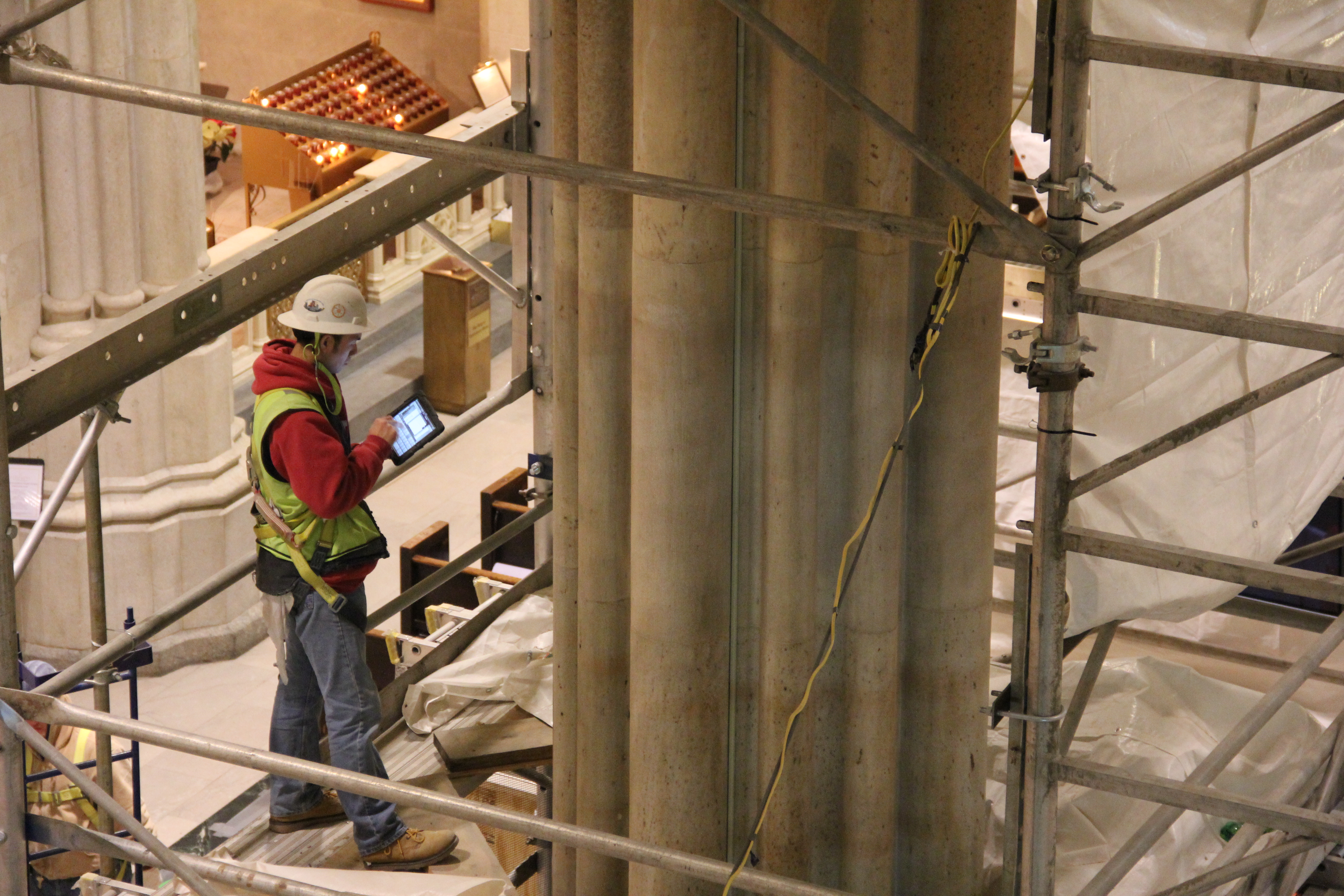 St. Patrick's, which opened its doors in 1879, is being restored with all the tools the 21-century has to offer—even iPads. Here, a construction worker checks instructions on the day's work. 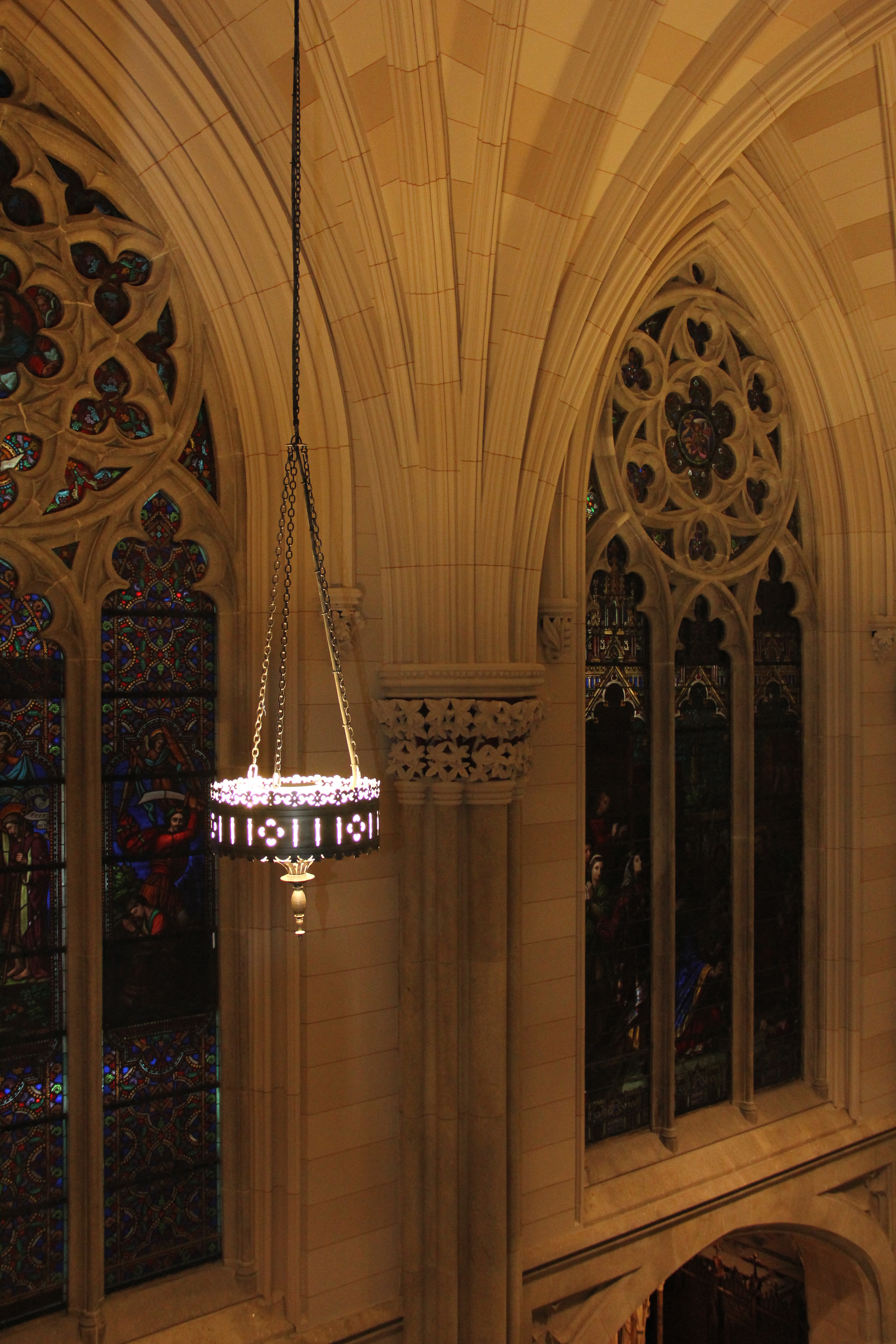 All the stained glass is being cleaned and the protective glazing that was put on the windows in the 1970s (and that inadvertently turned them a reddish color) is being removed and replaced. 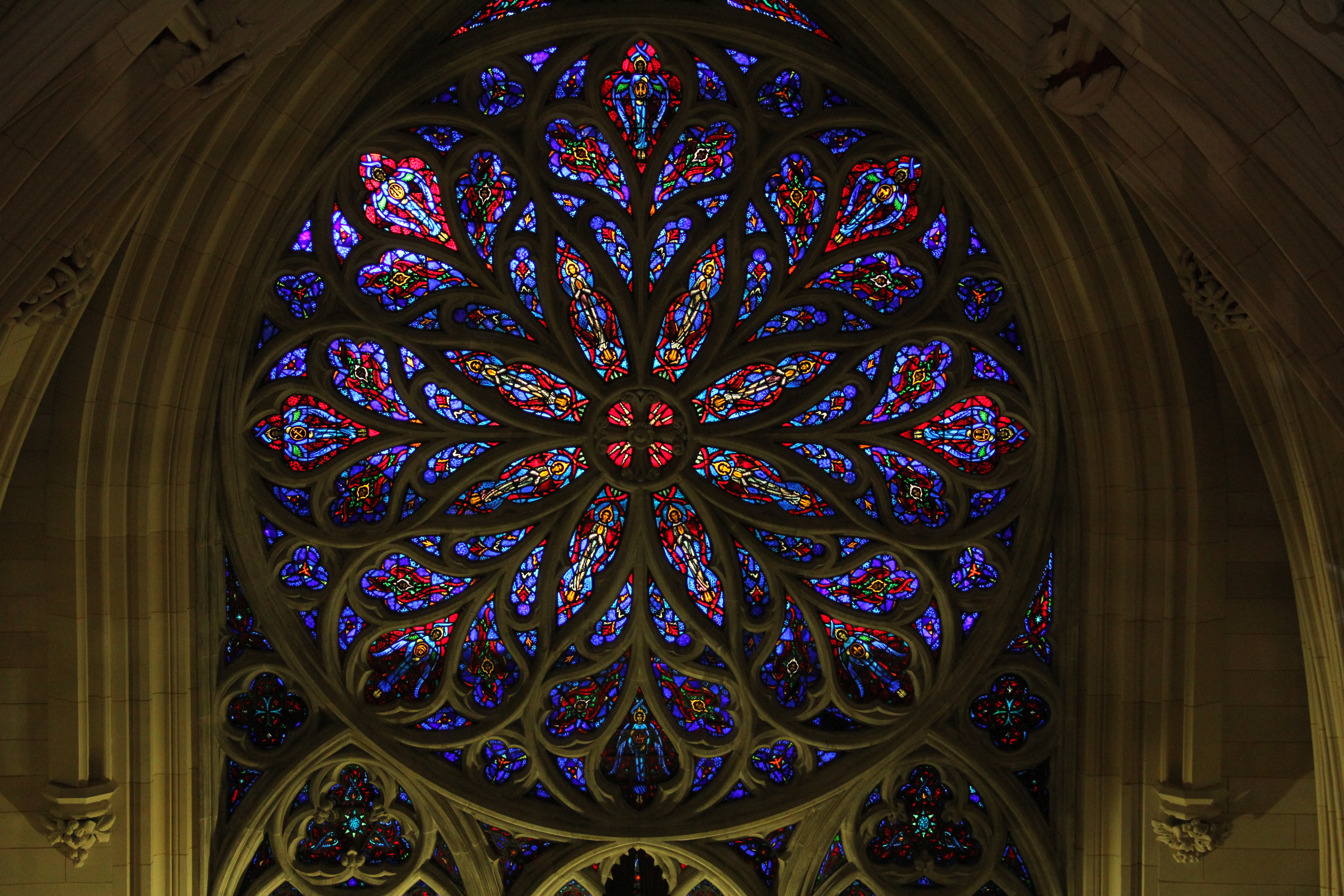 About 50 percent of the stain glass panels have been cleaned so far, including the Rose Window. 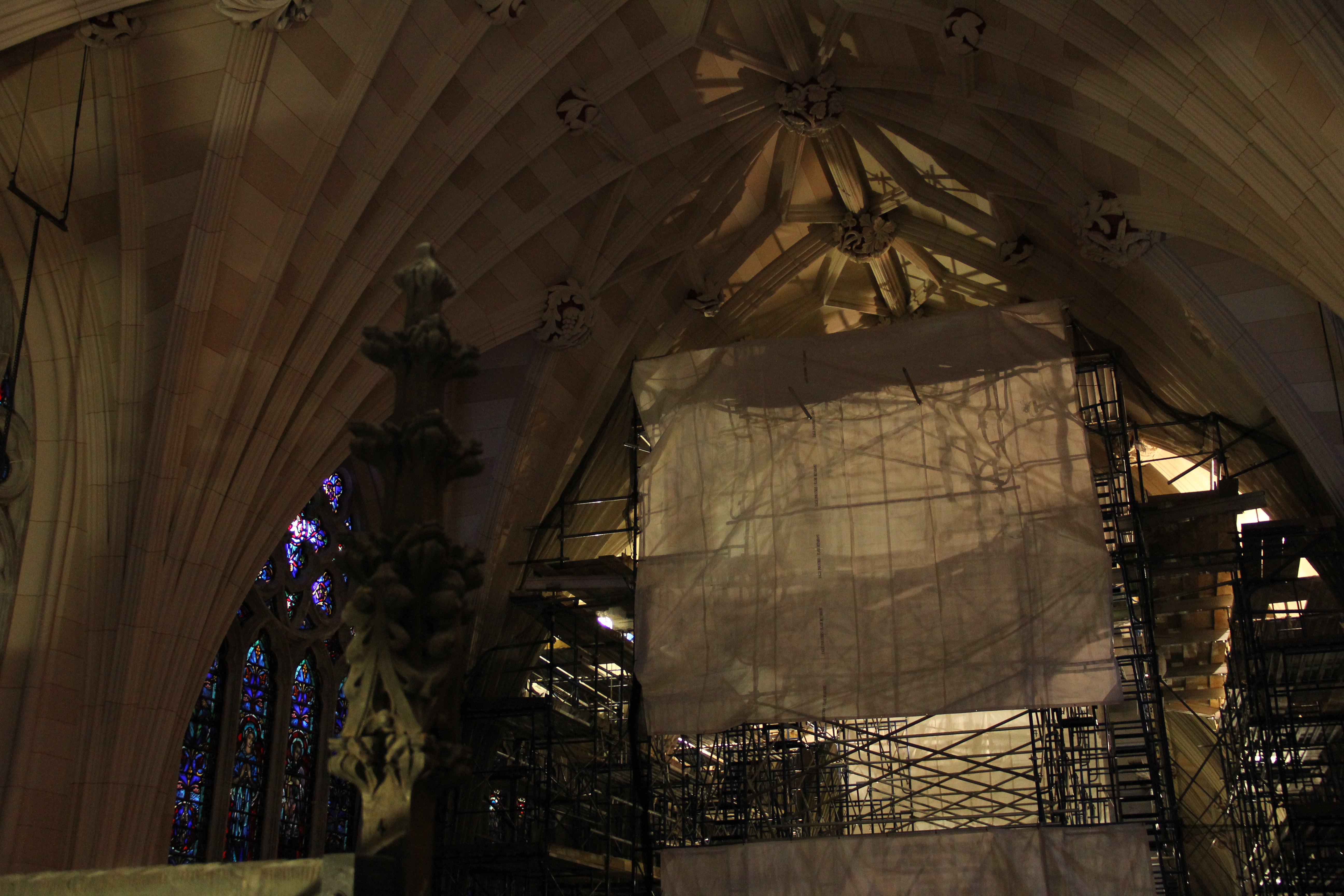 Scaffolding covers the organ loft at the west end of the nave. A number of organ pipes were removed to be repaired, and those that remained were covered to protect them from dust. 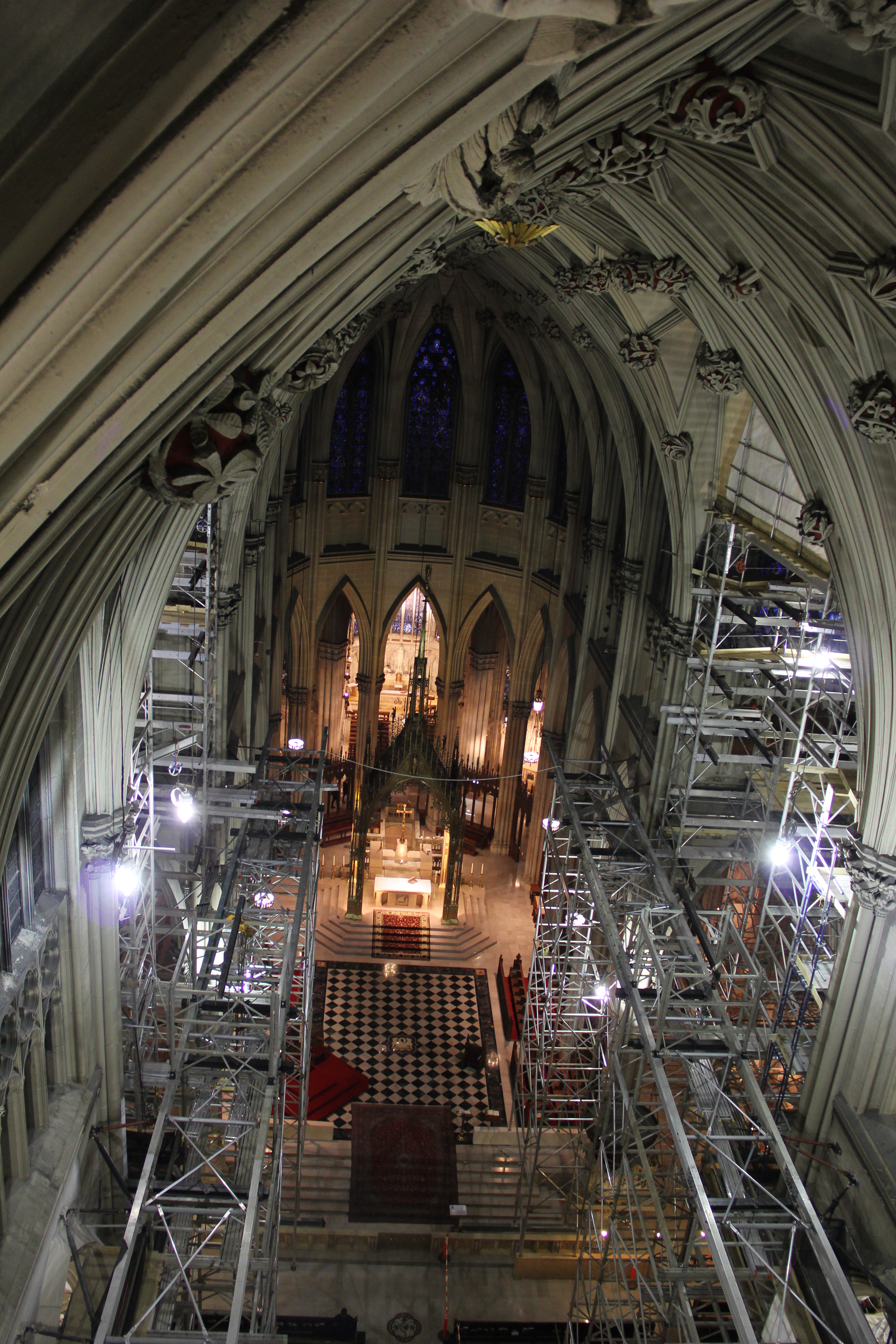 A view of the sanctuary from the organ loft. 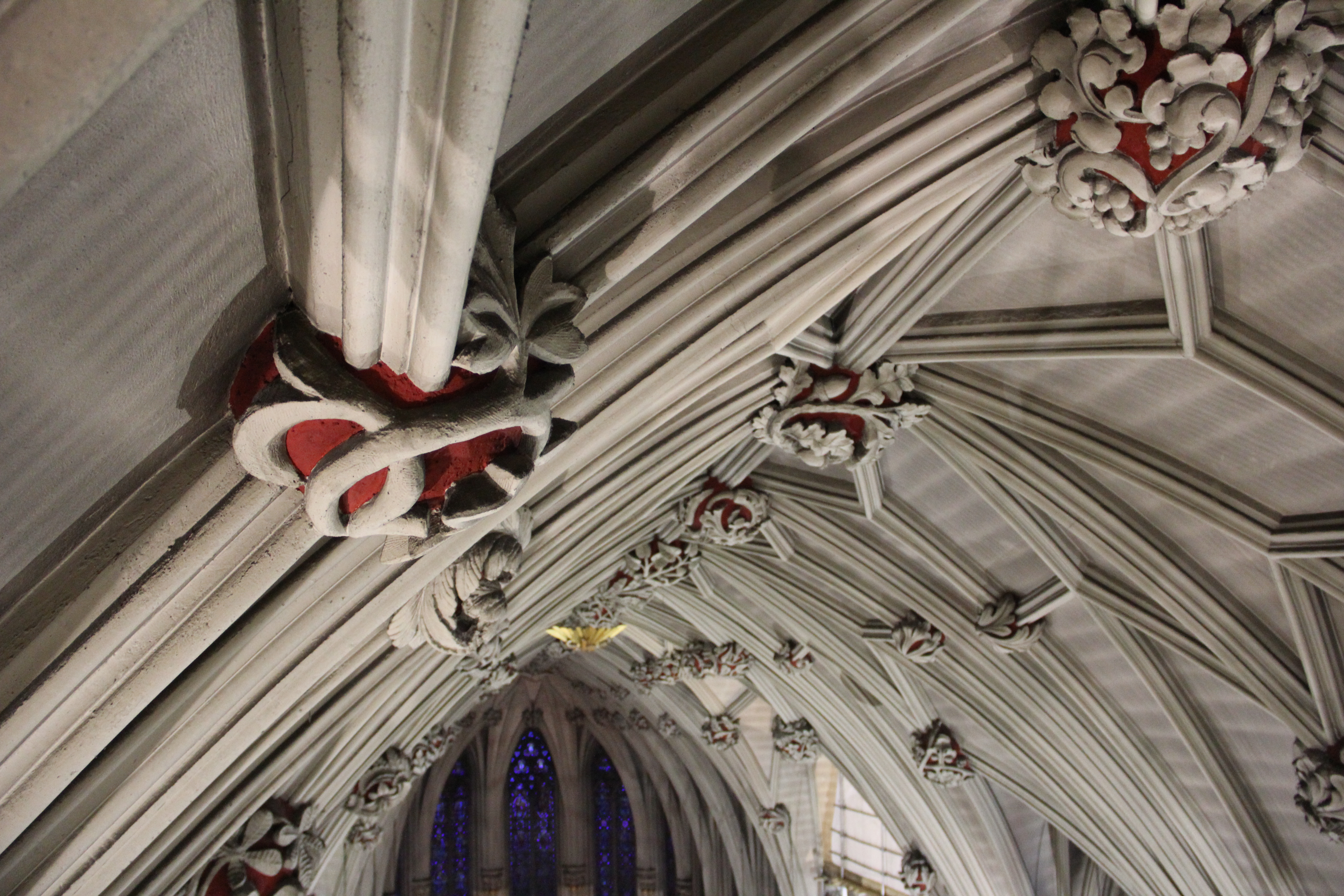 Each of the red decorative bosses that adorn the ceiling have a unique design. The plastered ceiling vaults will soon be scrubbed clean and repainted. 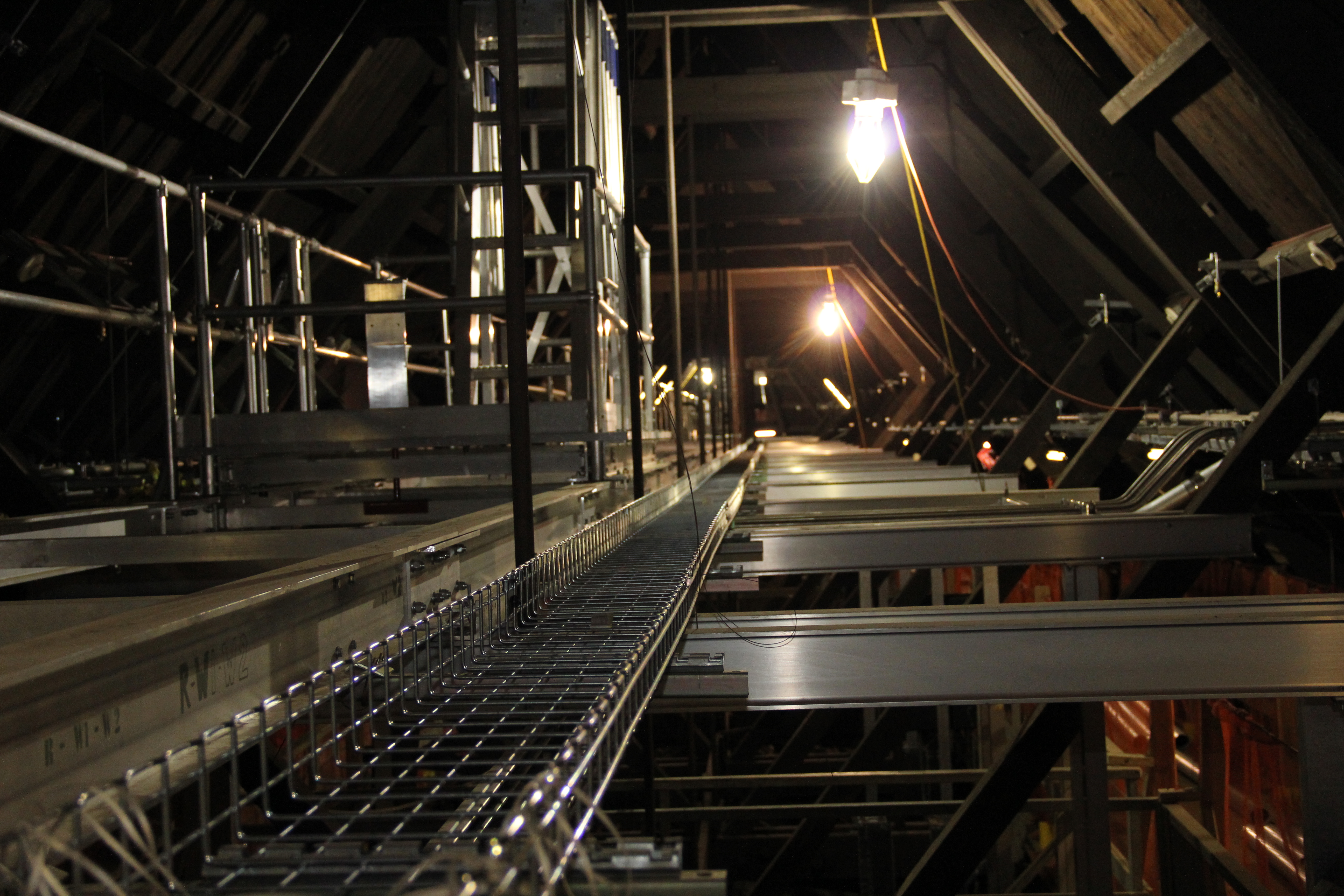 A new fire-suppression system that relies on mist, instead of large amounts of water that would cause structural damage, has been installed. 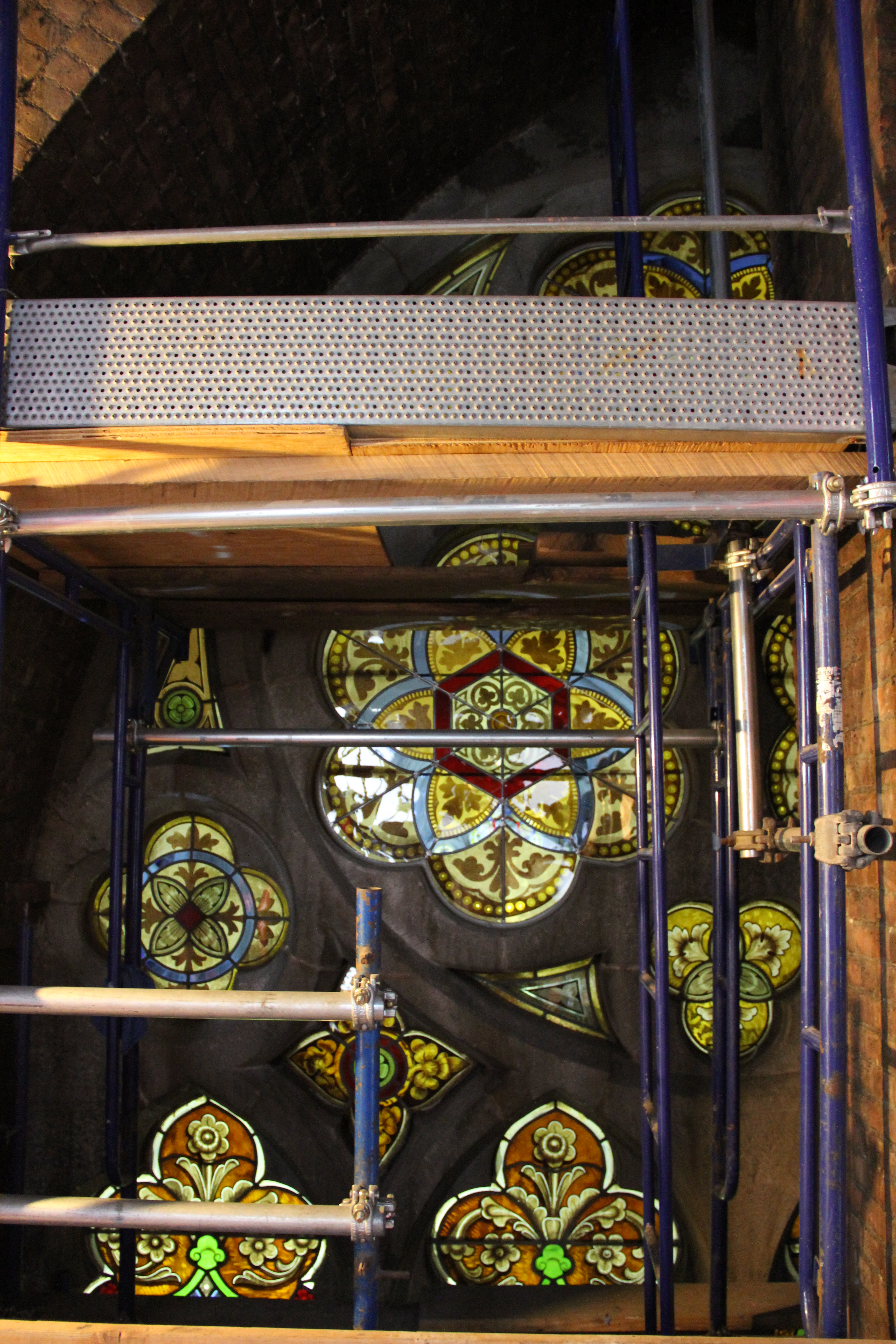 This stained glass window located behind the organ loft is not visible from anywhere in the sanctuary. It was "rediscovered" during the restoration project and is now being returned to its former brilliance. That such a beautiful panel is hidden from human eyes reminds us that cathedrals are ultimately built "for the greater glory of God."