What would Simone Weil make of the way we work today? 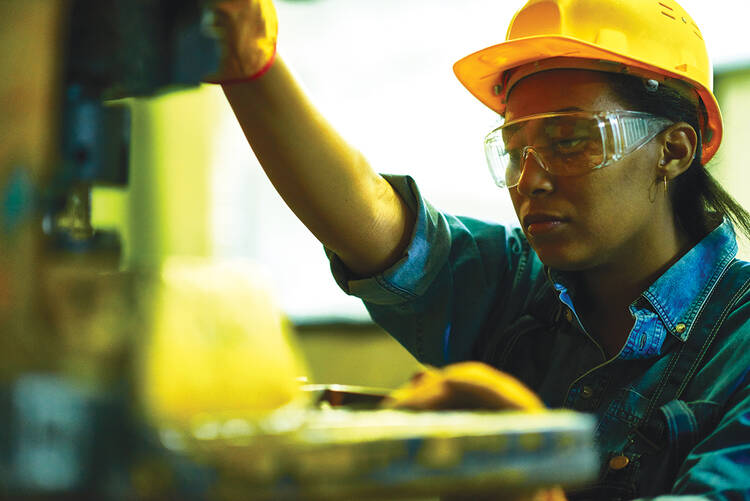 We read more and more these days about the prospect of a “post-job society”—one of automation and cybernetics, of digital technologies, 3D printers and robotics. This sounds very exciting for the well-off and well-educated population. A class of workers, however, will still be needed to construct the hardware and excavate the materials essential for hi-tech applications.

Unfortunately, these workers are often vulnerable and exploited. In “Laudato Si’” Pope Francis asks us to pay attention to their plight before we advance too quickly to adopt the latest technological innovation. While his remarks touch upon the physical well-being of the poor, he also warns of the spiritual values that are lost in exploitative work. What precisely are these spiritual values, and how do they manifest themselves? What difference do they make to us, and can they be duplicated in a society of leisure?

Simone Weil, a French philosopher and mystic who lived in the first half of the 20th century, explored these questions extensively. She perceived the unique spiritual values of work, in its proper form, as those that hone our human capacity for attention, love of neighbor, prayer and understanding limits.

Life in the Factories

Weil was the rare philosopher of work who gave serious attention to working conditions throughout her intellectual formation. Wishing to experience the industrializing economy first hand, she took jobs as a machinist in three Parisian metallurgy factories where parts were forged for the city’s transport system. She expected to find camaraderie among the workers who were making a major contribution to the future of French society. She found instead overworked men and women who were exhausted, disheartened and desperate about maintaining a sustainable income for themselves and their families. The experience gave her a new reading of reality and of the role of God in the world.

Today the workplace has evolved, but the description above unfortunately still applies not only to marginalized people in developing countries but also to workers in industrialized countries. An extreme example is the 150,000 electronic waste workers searching the so-called Electronic Waste Dump of the World in Guiyu, China. During 16-hour working days, tens of thousands of individuals scavenge for the valuable elements in discarded cell phones, computer parts and printer cartridges, while the noxious gases from burning toxic waste contaminate the air and water. But the money made by the authorities and the low wages—considered high at $8 a day—keep the businesses going.

Such work is obviously degrading. But we must ask: What conditions in the workplace would foster spiritual growth? For Weil, work—that is, taking some material element and transforming its purpose in response to a need—puts us in touch with ourselves, with others, with the exterior world, with what is real and has limits. Above all, work can nurture a constant awareness of the purpose of each human being and allow an individual to participate in God’s act of creation. Work in its proper form requires the worker to precede each action with careful, methodic thought. A workplace organized to encourage thought brings equality of respect to everyone trying to accomplish the goal of transforming matter into a useful product.

Weil considered action preceded by thought as the true source of liberty; she defines liberty as the relationship of thought to the network of laws governing the universe—a concept she calls necessity. When the organization of the workplace separates those who do the intellectual planning from those who do the physical work in a blind, subservient way, the situation becomes oppressive rather than liberating. Human beings do not become vital, reflective participants in society after hours of mind-numbing toil. Nor can they seek the “personal growth and sanctification in the interplay of recollection and work,” conditions seen as crucial by Pope Francis.

Humankind’s teleological purpose is to voluntarily consent to God’s love and to regard the material world as an implicit expression of that love. Suffering that exists from causes both natural and criminal creates obstacles to that consent. Loving God even in affliction, however, is possible if the soul is open to supernatural grace. Perfecting one’s capacities for attention requires an apprenticeship to prepare the soul to receive God’s strengthening grace. In Weil’s religious philosophy, the virtue of attention is the purest form of prayer. Work that requires thought before action—mindful attention given to solving the problem at hand—is the best vehicle for that apprenticeship. Leisure activities that are not in response to a need cannot rise to the same spiritual level.

Attention to the suffering of others is true love of neighbor, Weil argues. Work, with its requirements that one get out of oneself to attend to the task at hand, serves as an apprenticeship for the self-emptying necessary to attend purely to the needs of the other and ultimately to the love of God. Thus work has a moral component. One’s confrontation with the material universe teaches us obedience to its implacable limits, builds relationships with others and confers dignity. One’s subjective concerns give way to seeing the world from another’s perspective, thus refining the ability to follow the second most important commandment: to love one’s neighbor as oneself. This apprenticeship in attention can serve as a model for how we carry out all our obligations. For Weil, “attention is the only faculty that gives us access to God.”

Weil’s reorganization of the workplace would include machines that are changeable for different purposes, according to both market and worker needs, plus decentralization of the workplaces. Life with the new inventions of 3D printers, robotics and cybernetics might well serve those goals, as well as honoring the human quality of thought necessary to achieve a useful product. But not if a considerable part of the global population is left to do the humiliating subservient work. Weil’s analogy of travelers in a car rushing pell-mell over rugged terrain without a guide applies to our contemporary situation. No one yet knows the full effects of the increasingly hi-tech society we live in. We should be wary lest the rapid advances in technology be given priority over the well-being of individuals.

We need only to look at the work of Kevin Bales, lead author of the Global Slavery Index, which counts 36 million workers presently enslaved, and of the Brazilian Sebastião Salgado, photographer of the world’s forgotten people and places, to know that too often love of neighbor is more honored in the breach than in the observance. All work is hard and at time monotonous, but it does not need to be degrading. Pope Francis reminds us that Jesus sanctified human labor and endowed it with a special significance for our development. He suggests that the following parameters should govern our economic, political and social decisions: “Work is a necessity, part of the meaning of life on this earth, a path to growth, human development and personal fulfilment” (“Laudato Si’,” No. 128). Both the pope and Simone Weil argue that work is sacred, for it expresses the dignity of men and women who have been created in the image of God. They call on us all to be the guardians of the moral dimension of work.

E. Jane Doering, professor emerita of French language and literature at the University of Notre Dame, is the author of Simone Weil and the Specter of Self-Perpetuating Force and The Christian Platonism of Simone Weil.

Show Comments (
3
)
Comments are automatically closed two weeks after an article's initial publication. See our comments policy for more.
Robert O'Connell
5 years 8 months ago
Two thoughts: 1) Decades ago, while representing otherwise unrepresented but newly legal immigrant workers, I got caught on my knees saying a prayer & invited some to join me. One responded somewhat snidely I thought, saying: "I haven't time Senor. My work is my prayer." I still think of that man. Doing even inglorious chores (and trying to do them well) is Christlike to me, possibly more prayerful than most of my praying. 2) Those worse off than a worker who is "overworked . . . exhausted, disheartened and desperate" is the unemployed" are the unemployed " men and women who [are] exhausted, disheartened and desperate about maintaining a sustainable" life for themselves and their families. Just imagine if we were all engaged -- perhaps imitating Mother Teresa -- and all our neighbors were cared for, in communion with, and otherwise treated with dignity by each of us all the time.
Robert O'Connell
5 years 8 months ago
I saw that I had somehow submitted the same comment(s) twice: This is my attempt to delete one. Sorry!
Charles Erlinger
5 years 8 months ago
Prof. Doering's article provides a lot of incentive to read more by and about Simone Weil.