The Wisdom Of Oz: Taking the long way home 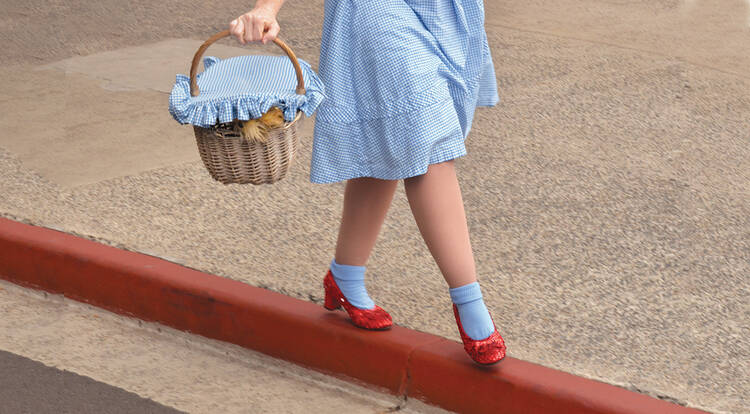 I have long puzzled over the ruby slippers in “The Wizard of Oz,” an archetype of childhood and transformation. When Dorothy’s house lands on the Wicked Witch and Glinda shows up, these slippers are magically transfered to Dorothy. It would seem that she now possesses her transport back to Kansas. Why then doesn’t Glinda tell Dorothy that all she needs to do is to click her heels and say, “There’s no place like home?”

Well, for one thing, there would be no story, would there? And the story is the point. Dorothy is not ready to move into the next stage of her life until she has discovered—not proven—that she already has the virtues her three pals seem to lack: courage, intelligence and love. It is not a test from some sadistic teacher to ratify her worth, but an occasion for her to prove to herself that she is ready to take on life in a new way. Only by rising to new challenges can we lose our fears of inadequacy. We find confidence by acting confident.

When Dorothy has surmounted her challenges, she can be allowed in on the secret: All along, the magic in the slippers has been Dorothy! We ourselves create the magic that can transport us to the next stage of our journeys. Now, as we age, we too are offered a new, parallel vocation: rediscover after a lifetime of challenges that old enchantment that still stands in our own shoes.

Like Dorothy moving into the whole new country of adulthood—sharing her newfound self in an entirely new way—our natural deceleration now invites us to fuse all the disparate elements of our lives and their insights, forging them into a newly owned, unique personal wisdom. Jesus keeps envisioning the master who returns from trips asking his servants for a tally of what they have made of his trust. Now, the tally of your having lived is you.

Once we acquiesce to two facts, we grown-ups can find an invitation to new life, locked in the jaws of a dilemma. First, we must make peace with the inevitability of diminishing and dying, sooner rather than later. Second, we must keep recalling the fact that we never merited to be here in the first place. Both insights intensify appreciation of true value—value only those of us lucky to last this long can fully appreciate. The core of the Gospel is resurrection, starting over.

But those two facts—both inexorable and easily ignored—can also leech out the zest in our living, till nothing is left but iron resignation. You have surely seen it. However, resilient folks grab hold of death and life—two contrary poles of a magnet—and reignite a whole new force: the indomitable human spirit that transcends both. With a bit of resolve, we can become like children again. We can find the magic that is still there, brightness inside the unpromising, though it involves ignoring superficial things like cellulite, wrinkles and paunches. The essential—the soul—is always there. And immortal. Unlike the surfaces, you do have final control of that because it is the essence of you.

Grasping the gratuity of life and inevitability of death, I rarely wake up grouchy. I do not think: “Oh, God, another day!” I think: “Oh, God! Another day!” Many worthier than I did not wake up. I did. What am I going to do with this day? Realizing every day is a gift you did nothing to deserve makes an honorable person appreciative. And vigilant. Forget Death catching me with sin on my soul—let Death never catch me bored!

It is all in the attitude. If you go out looking for problems or difficult people, it is amazing how many you find. But when we view the world through Christ’s eyes—the ones that penetrate the trivial surfaces—we become astonished as the real souls emerge, true selves who yearn for the same things: to be found, to be understood, even loved. Annie Dillard captures it in Pilgrim at Tinker Creek:

The world is fairly studded and strewn with pennies cast broadside by a generous hand. But—and this is the point—who gets excited by a mere penny? But if you cultivate a healthy poverty and simplicity, so that finding a penny will literally make your day, then, since the world is in fact planted in pennies, you have with your poverty bought a lifetime of days.

Now from a longer perspective, I look back at my biggest setbacks—humiliating grades, condescension, being dropped—and I find sour old Nietzsche was right. Every one made me stronger, forged a deeper leaden keel that lets me weather storms that founder flat-bottom boats. I discovered how shallow my ideas had been, about love, sex, death, success, character. I discover meaning. I now treasure how lucky I have been to have those times I was forced to find a reason to keep going. They are how God and I became good friends. Before, we were only acquaintances.

The Pursuit of Wisdom

Like Dorothy’s journey, ours lead to a better self-understanding and, hopefully, to wisdom. But what does “wisdom” mean? I suspect it consists precisely in having discovered the brightness, the enchantment inside everything we have encountered all our lives. St. Ignatius Loyola called it “finding God in all things.” We are meant to extract all the infectious goodness inside the unpromising, even the detestable, then process that into the sort of good that we can spread everywhere we go: contagious joy. We become alchemists.

What will make us, at least “in the going,” fulfilled? The resolve to keep asking questions—without hankering for definitive answers, grateful we will never run out of terras incognitas. Success is also rooted in attentive awareness for clues in the faces of those around us, alert as a new mother to unspoken signals. That continual sensitizing of the mind and heart is demanding, often without palpable rewards. It can be fatiguing. But it sure beats dying before we are dead.

This is the time to be sure that my life is not simply a story of what happened to me. Rather, it is a time to break through the surfaces under which God was hiding all along. I have found romance inside the commonplace, the gold in Rumpelstiltskin’s straw, the enchanted princesses and princes inside all the scullery girls and froggy boys, and within myself a peer of the realm of Christ.

St. Paul compacted the contents of “wisdom” as well as anyone when he described the fruits of the Holy Spirit—dead giveaways of God’s presence in a life: “love, joy, peace, patience, kindness, decency, faithfulness, gentleness and self‑control” (Gal 5:22-23). Those essentials are all invisible, known only in their effects—like the oak in the acorn, Beethoven in his embryo, the spark of God in your own soul. The years have assuredly swerved our understandings of those virtues from what they were when we were Dorothy’s age.

Love has little to do with palpitations, light-years from the need-based love that ate at us when we first pulled away from family validation. Genuine love sits at the opposite end of the spectrum from the slavery of teen infatuations. It is a blank check to be used anytime, no matter how inconvenient. We offer that even to God. It takes years to learn. It is Ma Joad in The Grapes of Wrath.

Joy shows itself most clearly and paradoxically in hard times. Joy cannot be sought in itself, but arises only as a byproduct of other endeavors. Like the legitimate pride in saying, “By God, I did my best today.” It blossoms automatically in a soul headed in the right direction, a grateful “victim” of God’s grace. It is Robin Williams’s character in “Dead Poets’ Society,” when he’s fired and his boys jump onto their desks saying, “O Captain, my Captain.”

Peace is the serenity that comes from having it all together, from wholeness. Surely it is not the peace the world gives, the unbotheredness in Caribbean ads. Rather, it is the confidence of the tightrope walker, those who defuse bombs, terminal ward nurses; not lack of challenges but self-possession standing up to them. It is the two Aussie soldiers in “Breaker Morant,” joining hands to face the firing squad.

Patience comes from having a reason to keep going. It is what Viktor Frankl means in Man’s Search for Meaning: a profound sense of purpose—an anchor in a truth outside oneself which gives substance to the resolve not to quit. It is Thomas More in “A Man for All Seasons.”

Kindness is the will to yield even to those who tax your patience, even when they find your caring cruel. Like all these virtues, it holds no hope of a return. Charity can be faked; kindness cannot. It is Burger, the psychiatrist in Judith Guest’s novel Ordinary People.

Decency is often rendered “goodness,” which is unhelpfully vague. Decency means doing what is fitting, right, just. The best word is dependable. It is Gary Cooper in “High Noon.”

Faithfulness adds the dimension of watchfulness, attentiveness, a vigilance beyond just being there for someone like an emergency phone number. It is Sam Gamgee in The Lord of the Rings.

Modesty is closer to unpretentiousness than meekness, which has prissy connotations. It has little to do with brash clothing; it is even less worried by sexual temptations than by narcissism. It is Melanie Wilkes in Gone With the Wind.

Self-control accepts responsibility. It has little to do with the whip-and-chair of the animal tamer we recall from childhood. Now it is honest, adult acceptance not only of one’s weaknesses but of one’s strengths. It is Atticus Finch in To Kill a Mockingbird.

Note that none of these virtues has ever been captured in any catechism. We who claim to live an adult Christian life are these lessons—in the way we carry ourselves.