A Winter Soul: Breaking through the coldest months 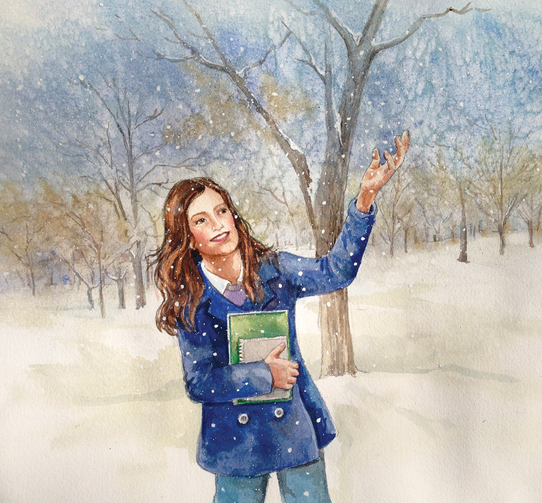 The first time I saw snow, I was 26 years old. I’d moved to Pittsburgh for graduate school after a lifetime in southern Louisiana, where I’d never owned a coat, hat, scarf or mittens. I remember I walked outside the coffee shop where I was studying and stood there, turning circles in wonder like some alien fallen to earth, looking every bit the yokel I was, overpowered by the beauty of the fat, white flakes, by the sudden hushed silence that seemed to descend upon the city, by the way it actually sparkled. I remember thinking, in complete earnestness, This is magic.

But Pittsburgh’s winters were mild and short compared to the winters in South Bend, Ind., where I moved after my wedding. After three years of bone-crushing cold and life under the “permacloud,” which rolls in sometime around November and doesn’t budge until May, I threatened my husband that I would never again live above the Mason-Dixon line. He got a job in Virginia, and I swore we’d never leave. I said, many times, he’d have to dig my bony fingers out of the red clay. He did.

When I looked at the map to see where Traverse City, Mich., was before he left for his job interview, I cried.

I made the best of it last year. Really, I did. It pricked my pride to have so many people warn me about how awful the winters would be, and I adopted a mantra: You won’t break me. I’m a fast learner and a die-hard romantic. I would study northerness. I would write us into a winter story. We would not just survive; we would thrive. We would snowshoe.

I read Norse myths and Norwegian novels and memoirs and got a (temporary) tattoo of Thor. I told myself I had a winter soul, made for sitting by the fire and reading epic novels. (When we couldn’t find a rental with a fireplace, I bought a fire pit and parked it outside the living room window so I could at least watch the sparks in the darkness.) I was determined to emerge from my first Northern Michigan winter victorious, sporting Viking horns and braids and a breastplate of bones and feathers.

I learned a lot. I learned to stop washing my face and hands with soap and water to prevent my skin from cracking and bleeding. I learned to wear makeup every day, not for beautification but as an extra protective layer. I learned to avoid cotton and denim and to invest in a down coat and the most expensive boots I could afford. I learned the terms polar vortex and Alberta Clipper. I learned, sort of, to drive in snow (I’m the one crawling along holding up traffic into Traverse City—sorry). I learned several different ways to tie a scarf. I learned how to make a hot toddy and to drink fish oil with breakfast.

When we lit our spring equinox bonfire in snow up to our waists on March 21, I was a little discouraged.

On Easter Sunday, we hunted eggs in gloomy snow piles and walked in gale force winds on Sleeping Bear Dunes. Admittedly, the temperature was starting to rise, and we were grateful to be outdoors at all, but the gloom was unrelenting. All I could think of was the dogwoods in full bloom back in Virginia, the daffodils long since up and withered. We drove the 20 minutes back to our gray ranch house in the gray north woods, and I crawled into bed and cried.

By the time I woke up to snow on my son’s birthday in May, I was well beyond broken.

A Time to Thrive

In hindsight, my naïveté seems cute. Now that I’m a hardened northerner, I know that winter isn’t a time to thrive. It’s a time to buy a light therapy box, take massive amounts of vitamin D and get on antidepressants. In the worst months, January through April, anyone who can afford to leave for a while, does. But most people just put their heads down, feed their fires and press on. Or they ski. A lot. As my neighbor says, There’s no way out but through. And sometimes going through just isn’t pretty. Sometimes you crawl to the finish.

St. Paul reminds us again and again that without death there is no resurrection, no restoration. Look around you, fools, he says, it’s the law of nature—that which you sow does not come to life unless it dies (1 Cor 15:36). Suffering and death are necessary, not meaningless. A crusty old Anglican theologian named Richard Sibbes said that as “winter prepares the earth for the spring, so do afflictions sanctified prepare the soul for glory.”

There is plenty of beautiful writing about winter as a fallow time—a season of rest and emptiness necessary for farmlands and humans to continue producing a healthy harvest. Caryll Houselander, my favorite Catholic eccentric, said in her Advent essays that many are too impatient with winter. “A seed contains all the life and loveliness of a flower,” she writes, “but it contains it in a little hard black pip of a thing which even the glorious sun will not enliven unless it is buried under the earth. There must be a period of gestation before anything can flower.” She urges us to trust that Christ grows in the fallow time, in our sorrow, and “in due season all the fret and strain and tension of it will give place to a splendor of peace.”

This is all very nice and reassuring and exactly what might pop up in my Instagram feed as an inspirational meme on some February morning. But when February isn’t even near the halfway mark of a northern winter, it doesn’t quite get to the heart of things.

Fallow is too gentle a word for this kind of winter. This is not a season of quiet melancholy, a few weeks at a slower pace to be savored over a cup of tea. This is months trapped inside with small children. This is influenza and whooping cough. This is getting stuck halfway into the bank parking lot and blocking traffic. This is black ice and zero visibility. This is breaking bones in a fall. This is holes in the roof from the weight of the snow and the holes in the road that swallow your tires. This is what comes before the fallow time. This is a harrowing.

A harrow is a horrible-looking farm tool with wheels and spikes and teeth. It breaks up the earth, crushes, pulverizes, plunders. Sound too extreme? Then I’ve captured it perfectly.

New year, new mantra. As this winter gets underway in earnest, I say, go ahead and break me. Plunder me, take me down, so I can be made new. Maybe that is exactly what I need—not merely a rest but a reinvention.

If I can’t be a Viking, Lord, make me the Darkling Thrush of Thomas Hardy’s poem, who though “...frail, gaunt, and small, in blast-beruffled plume” flings his soul upon the growing gloom and sings.

So little cause for carolings
Of such ecstatic sound
Was written on terrestrial things
Afar or nigh around,
That I could think there trembled through
His happy good-night air
Some blessed Hope, whereof he knew
And I was unaware.

If I survive another polar vortex, it will not be by my own schemes and strengths and romantic fantasies but by grace (and a nice long hiatus in New Orleans). My soul might be the only thing that can grow in this weather. 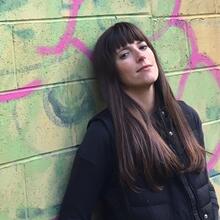 Jessica Mesman Griffith is the author, with Amy Andrews, of the memoir Love & Salt, A Spiritual Friendship in Letters, and a regular contributor to Good Letters, the Image Blog. She lives in northern Michigan with her husband, the writer Dave Griffith, and their children.

@Jessica_Mesman
Show Comments (
2
)
Comments are automatically closed two weeks after an article's initial publication. See our comments policy for more.
Sara Damewood
6 years 7 months ago
I love your attitude... and your writing!
Ann Johnson
6 years 7 months ago
I was blown away by your varied descriptions of winter - and grateful I live in Virginia where it's all the way up to 15 degrees ABOVE zero. But why, oh why, in 2015 is there still whooping cough to be found in the US? I hope these are not your children who have not been vaccinated.