Does American exceptionalism clash with Pope Francis' call to care for creation? 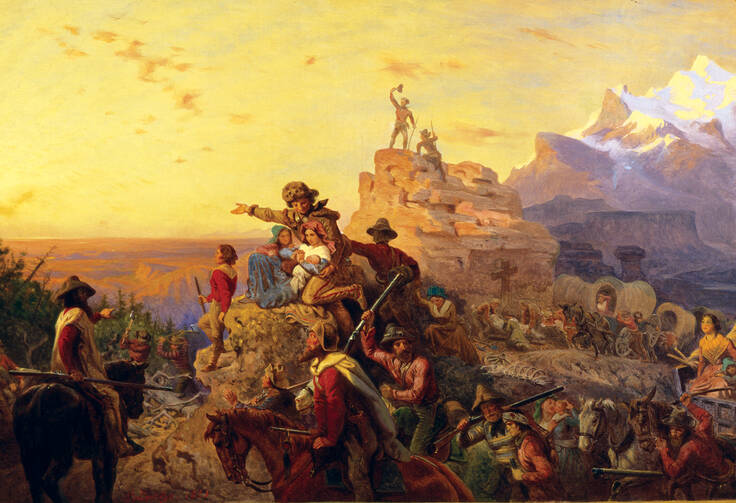 In 1846, Representative John Quincy Adams asked the clerk of the House of Representatives to read aloud Gn 1:28 (“Rule over the fish in the sea and the birds in the sky....”). Adams was arguing for the United States to take control of the entire Oregon territory, even at the risk of war with Great Britain, and he used the dominion mandate of Genesis as his justification: “We claim that country [Oregon]...to make the wilderness bloom as the rose, to establish laws, to increase, multiply, and subdue the earth, which we are commanded to do by the first behest of God Almighty.”

Since the Colonial period, Americans have seen themselves as an exceptional people, a view that has taken two forms: manifest destiny and example. Manifest destiny is the belief that God has chosen Americans as his special people and has ordained that they control the North American continent. Adams’s views on Oregon are consistent with manifest destiny, as was President James K. Polk’s motivation to go to war against Mexico. (Ironically, that war forced the United States to compromise and divide the Oregon Territory with the British.) But John Winthrop, the first governor of the Massachusetts Bay Colony, articulated the exemplarist form of exceptionalism when he referred to the colony as a “city upon a hill” in 1630. In this view, America must serve as an example to the world, of faithfulness to high ideals. Abraham Lincoln fits within this exemplarist framework. He consistently pointed, in his many critiques of the institution of slavery, to the necessity of being true to the equality clause of the Declaration of Independence.

I have called these two articulations of American identity “closed” and “open.” Closed exceptionalism hijacks Christian doctrines and imagery to cast Americans as divinely chosen, morally innocent and entrusted by God with a land to act upon and dispose of however suits them. But open exceptionalism is a political and social expression of true American identity. It does not rely on contrived religiosity to advance a unifying vision for how Americans see themselves in relation to the world, or how to interact with the bountiful and beautiful land that they occupy.

Pope Francis’ “Laudato Si’” presents a challenge to closed American exceptionalism. The encyclical offers a potent critique of the “drill, baby, drill” mindset of Americans who believe that if a natural resource is available, we are obliged to exploit it, whatever the cost. It also critiques the “throwaway culture” of which we are all a part, and explains how that culture is contributing to the general destruction of the good gift of creation given to us by a loving God. Pope Francis stresses that the Christian understanding of the dominion mandate is that God gave humans responsibility over creation not for purely utilitarian purposes, but to be stewards of it as a good in itself. After all, God called the world he made “good” six times in the creation story.

“Laudato Si’” offers a developed theology of creation, consistent with Scripture, church tradition and a tradition of American conservationist thought that includes the writings of Henry David Thoreau, W. E. B. Du Bois, George Washington Carver, Theodore Roosevelt and John Muir. In particular, his articulation of the dominion mandate captures the essence of what Francis calls “integral ecology.” Francis teaches that justice and injustice among human persons have direct ramifications for the environment. Where there is injustice inflicted on one group of persons by another, the land also suffers. Human flourishing does not occur separate from the flourishing of the earth.

Despite Francis’ eloquent and thoroughly Christian articulation of the dominion mandate, it seems unlikely that “Laudato Si’” will advance a productive dialogue about environmental stewardship in the United States without profound national self-examination and a fundamental reassessment of American identity. “Laudato Si’” has been described as a cri de coeurby R. R. Reno, but it is really more of a prophetic word along the lines of Ezekiel, as the Rev. James Kurzynski writes, indicting American religious nationalism or, more specifically, closed American exceptionalism. Because closed exceptionalism is so deeply ingrained in the history of how Americans imagine themselves, this myth stands as a serious stumbling block to American engagement with “Laudato Si’.” But open exceptionalism is historically and theologically in agreement with Pope Francis’ articulation of the dominion mandate and does provide a basis for civil discourse.

Francis’ understanding of the dominion mandate is linked with the goodness of creation and the imago dei, both of which are declared in Genesis 1. He also finds its roots in Jeremiah 1, in which God affirms, “Before I formed you in the womb, I knew you.” But he goes on to tie God’s relationship to humans as their creator to a multidimensional relational pattern. He writes, “Human life is grounded in three fundamental and closely intertwined relationships: with God, with our neighbor and with the earth itself.” Reality is thus grounded in this inextricable three-dimensional relational link. Adam and Eve were given the responsibility in Genesis 2 to till and keep the garden. Francis writes, “‘Tilling’ refers to cultivating, ploughing or working, while ‘keeping’ means caring, protecting, overseeing, and preserving. This implies a relationship of mutual responsibility between human beings and nature” (Nos. 66, 67). But human sin “disrupted” the “harmony between the Creator, humanity and creation as a whole,” and “distorted our mandate to ‘have dominion’ over the earth….” Thus, “the human environment and the natural environment deteriorate together” and “we have to realize that a true ecological approach alwaysbecomes a social approach; it must integrate questions of justice in debates on the environment, so as to hear both the cry of the earth and the cry of the poor” (Nos. 48, 49).

Francis’ prophetic word confronts closed American exceptionalist accounts of the environment. Closed exceptionalism regards America as God’s chosen people, innocent of social problems and dwelling on a land set aside for them and their children forever. It is an exclusivist rendering of American identity, informed by religious language, manipulated to suit a nationalistic purpose. As closed exceptionalism relates to the environment, the land is to be acted upon in, as Francis describes, “the unbridled exploitation of nature” (No. 67).

In thinking historically about closed exceptionalist accounts of the land, perhaps nothing is more obvious regarding this attitude of “acting upon” than the plantation economies of the antebellum South. The invention of the cotton gin, the Louisiana Purchase and the end of the Napoleonic Wars in 1815 opened the way for Americans to expand the cultivation of cotton into the territories of the old Southwest, particularly in Alabama and Mississippi. In 1800, the United States was producing 73,000 bales; by 1820, the yield was 10 times that number, and the nation became the leading producer of cotton, passing British India. Because land was becoming available in such vastness to so many at so little a cost, many viewed it as limitless and disposable. As Daniel Walker Howe wrote, the settlers “gave little thought to preserving the natural environment for future use.... They employed profligate methods of agriculture and land-clearing, heedlessly burning timber and valuable ground cover, leaving precious topsoil to wash or blow away.” Because farmers and plantation owners took the short view, when the land was exhausted, they simply packed up and moved elsewhere. Virginia led the nation in out-migration in the decades leading up to the Civil War, sending a million or so people west in search of fertile lands.

The application of chattel slavery did particular violence to the land. Once planters claimed land and designated it for cotton cultivation, slaves cleared the ancient forests and plowed in long, straight rows. Cotton planters rarely rotated their crops or improved their fields. When the soil’s nutrients had been exhausted by overcultivation, landowners purchased new lands and moved on. “Migration was driven by soil loss and soil sickening and drawn by cheap land,” writes the historian Roger Kennedy. “Cheap land was treated as disposable. Cheap things usually are.”

The Southern plantation economy is a historical example of how Americans saw the land. Manifest destiny, the 19th-century notion that God had ordained the North American continent be dominated by the United States, was fueled by greed and by the desire to exhaust natural resources and extend slavery farther and farther west.

But other voices from history present an articulation of exceptionalism that corresponds more closely with Francis’ theology of creation and the dominion mandate. George Washington Carver (1864–1943), the famous African-American botanist at Tuskegee University, sought to make right some of the wrongs slavery perpetrated against both the people and the land. Kimberly Smith wrote that Carver “saw humans as ‘copartners’ with God in the creation—and junior partners at that, whose scientific study of nature is inspired by God and justified by its charitable purpose of relieving human suffering.” Carver’s biographer, the historian Mark Hersey, wrote that “Carver’s deep religious sensibilities, which blended Christianity with a profound veneration of the natural world that bordered on mysticism, shaped his work” along with “ideas about how impoverished African American farmers could overcome the obstacles facing them.” Carver’s notion of conservation was thus informed by the dominion mandate. For Carver, God’s command to humans to fill, rule and subdue the earth was not to be understood in the closed exceptionalist sense of conquest. Rather, the dominion mandate should be carried out with patient care and nurturing that benefitted the many, rather than the few.

Closed American exceptionalist figures like Rush Limbaugh cast “Laudato Si’” as an un-American diatribe, an attempt to undermine American sovereignty and intrude on the American way of life. But open American exceptionalism, while regarding the land as special, deems it the heritage of a pluralistic society, a gift of God for all people. Closed exceptionalism is a stumbling block to engagement, but this understanding of American identity has been the historical default for Americans. Whenever Americans have seen themselves through an open exceptionalist paradigm, they have had to struggle to do so. Alexis de Tocqueville wrote in 1835, “Nothing is more embarrassing in the ordinary intercourse of life than this irritable patriotism of the Americans.” Perhaps American patriotism rightly considered can still win the day.

John D. Wilsey is assistant professor of history and Christian apologetics at Southwestern Baptist Theological Seminary in Fort Worth, Tex. This article is adapted from his book American Exceptionalism and Civil Religion: Reassessing the History of an Idea.