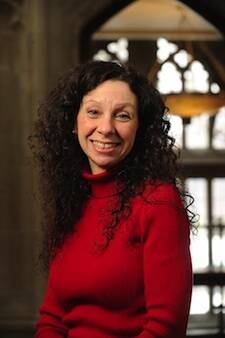 Not when the Twin Towers fell.

I was in the hospital. Suffering from a malady the ER doctors could not name, I was admitted for tests and observation. I had never spent time in a hospital before, at least not as a sick person. After the routine delivery of each of my three healthy babies, I had been released within 24 hours, for which I was grateful. Hospitals have always been places associated with disaster. My father died in one at age 42 when I was 8 years old, and my eldest brother nearly died in one at age 16 the following year. According to our family narrative, we got him out in time.

Looking out my window at the mid-March weather, I felt as low as the gray clouds hanging on the horizon. Spending just a few days in the hospital had dampened my usually genial spirits and killed my confidence. Instead of my own clothes, I was wearing a hospital-issue gown—the same kind every other patient was wearing, with its signature undignified opening in the back. The nurses who came in to dispense medicines identified me by a number (my D.O.B.) rather than my name. It seemed that the culture of the hospital, in collusion with my illness, was slowly robbing me of my identity.

My cellphone became my lifeline, my means of connection to family, friends and colleagues, to the events going on in the great world and, most important, to the self I was beyond those imprisoning walls. One powerful source of that identity is the fact that I am Catholic; and like other Catholics all over the world that March, I was eagerly waiting to see who would be the new pope.

My hospital roommate was waiting, too—Elena, a 90-year-old Jewish woman with a playful sense of humor and a mind sharp as the No. 2 pencil she used to do the New York Times crossword puzzle each morning. When the orderly came to take her for X-rays one day, she asked if she ought to bring anything with her. “Nope,” replied the reticent young man. “Just my body?” Elena exclaimed with a flourish, extending her arms to present herself in all her human glory. Even he smiled. An attorney who still kept her Manhattan practice, Elena was delighted to find herself rooming with a Roman Catholic. The world was waiting for the new pope, and she had so many questions.

The lab technician who came to collect blood each day was also glad to discover that I was Catholic. Jamaican by birth, Vera would snap on the light at 5 a.m. each morning to wake me, sing-songing her daily mantra, “I may be a vampire, but I don’t work in the dark.” Vera was waiting, too. As was the young Indian nurse and the Latina eucharistic minister who came by to dispense Communion.

Thanks to these women and their curiosity, our sickroom became a hotbed of papal conversation. Talk of medical maladies was set aside for church vocabulary—conclave, College of Cardinals and, inevitably, infallibility. Bed-bound in my hospital gown, I.V. tubes trailing from my arms, I was the least likely evangelist, teaching people what I knew about the church and relying on the miracle of Google for what I didn’t. These were my companions on March 13 at 1:30 p.m. when I first got wind of the white smoke. As I held up my iPhone, we thrilled to the roar of the crowd standing vigil in rainy St. Peter’s Square, to the bells ecstatically ringing out the news.

Moments later, my Facebook page erupted with excitement, all 692 of my “friends” (many of them nerdy Catholics like myself) simultaneously sharing the good news. As “Habemus papam” echoed through cyberspace, a friend living in Rome posted photos of the celebrations breaking out all over her city. So many people, separated by geography, divided by time zones, differentiated by race, ethnicity and faith traditions—all were in the room with us celebrating. And so that dreaded place, the hospital, held the world for a moment. Transformed from a site of catastrophe into a one of joy, it became a place to ponder possibility.

Mere moments after his election, Pope Francis was already the agent of change—and has been ever since. Two and a half years later, on the heels of his historic visit to North America, this pope who brought the saints and the poor into the papacy still thrills and surprises us, still fills us with hope—as he did the first moment he entered our lives. March 13, 2013, a day when hope triumphed rather than tragedy, remains a day to remember. You know where I was. Where were you?

Show Comments (
1
)
Comments are automatically closed two weeks after an article's initial publication. See our comments policy for more.
Lisa Weber
6 years 12 months ago
I don't remember exactly where I was when Pope Francis was elected, but I am pleased at the joy he brings to Catholics and nonCatholics alike. He demonstrates how powerful the Gospel is when it is lived.