What We Wrought: Taking responsibility for Iraq’s cycle of violence 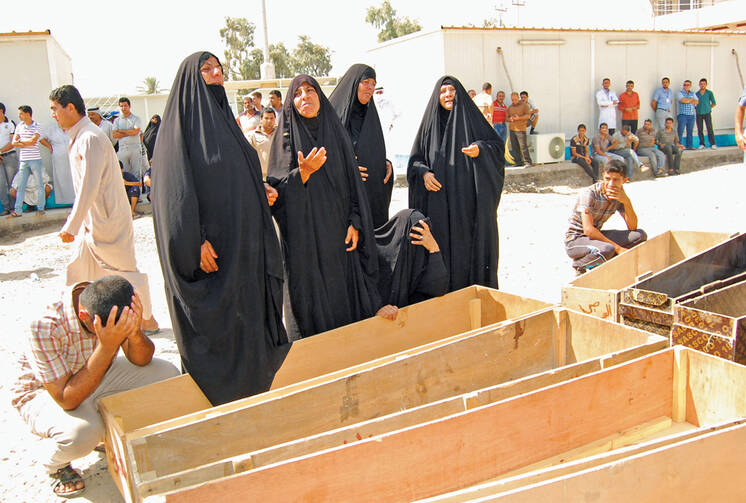 We are living in a time of great extremity. The recent typhoon that tore through the Philippines left thousands dead. Countless people desperately need water, food and shelter, and many storm victims still cannot be reached. In Iraq, people live with bombs and explosions every day, but we hear almost nothing of it in the news. How can people respond if they never hear about this suffering?

In the last year almost 1,000 people have been killed in Iraq each month. “Strewn body parts everywhere,” a friend from Baghdad described the situation recently over the phone. Children are seeing things they should never witness. Their minds, their psyches are changed forever. They have been living in extremity for over a decade now—and even longer if you go back to the Persian Gulf War in 1991 and the subsequent sanctions that had fatal consequences. Young people in Iraq have known only disaster.

Admittedly, I am a bearer of bad news. I have been for over a decade now. I first went to Iraq in the fall of 2002 as a member of Voices in the Wilderness. At that time the U.S. invasion of Iraq seemed inevitable, and Voices—founded in 1996 to draw attention to the draconian effects of U.S. economic sanctions on ordinary people—formed a small project, called the Iraq Peace Team. Many team members traveled to Iraq, planning to remain in the country in the event of a U.S. invasion. We were there because we believe all life is sacred. This belief has always been fundamental to Voices and to my own Catholic Worker community.

In January 2004, Voices decided to no longer travel to central or southern Iraq for fear of risking the lives of Iraqis who associated with us. The United States not only occupied their country; it also created a path for terrorist groups to enter Iraq. The United States had dismantled the Iraqi police and army and opened up the nation’s borders. After the fall of the regime, I saw firsthand groups from surrounding countries descend on Baghdad. Last fall, former Representative Ron Paul, Republican of Texas, wrote about the pledge of President Obama to provide additional U.S. military aid to Iraq to combat the growing influence of Al Qaeda. Mr. Paul lamented that no one bothered to mention that Al Qaeda was not even in Iraq before the U.S. invasion in 2003. “What a disaster,” he wrote.

Between 2005 and 2011 I lived for a total of four years in Jordan and Syria as part of Voices for Creative Nonviolence (formerly Voices in the Wilderness) to witness and call attention to the dire situation of hundreds of thousands of Iraqi refugees who were forced to flee the violence and death threats and, far too often, the tragic deaths and/or kidnapping of family members. Late in 2011, I was finally able to return to Iraq after a nine-year absence. I find it impossible to convey my feelings upon returning to this country, whose people have shown me great hospitality and warmth. It was like coming home. My latest trip was in May of last year.

No Place To Go

Back in the United States, I open my e-mail messages with dread, wondering if I can take more bad news from Iraq, more stories of explosions and killings. What I fear most, however, is not hearing from friends in Iraq and wondering if they are still alive. One friend writes, “We cannot leave our house to go to work.” Another friend tells me: “It is too dangerous for our children to go to school, but the children insist on going. No one is safe.” There is no safe space in Iraq, not in schools, buses, mosques, youth soccer fields, soccer stadiums, barber shops, restaurants or open-air markets. There is no place to go, and no country wants to take Iraqi refugees.

I receive report after report of kidnappings, assassinations and suicide bombings. During my last visit to Iraq, everyone I met—except for one person—said they would leave the country if they had a place to go. The exception was a gifted and beloved artist. He told me his decision to stay in Iraq is a form of “resistance against a dirty war.”

As mind-boggling as it seems, 10 years after the war there is still no national electrical grid or potable water. Even more devastating for Iraqis is the total lack of security and the corruption that runs through every sector of government. People feel helpless and hopeless. “You destroyed our country,” one student told me. Another Iraqi said, “You destroyed our ancient civilization. You took our childhood. You took our dreams. What can you do? You drop bombs, commit war crimes and then send research teams to investigate what is in the bombs. What can you do? We will not forget. It is not written in our hearts, it is carved in our hearts.”

When I give a presentation about Iraq, it has always been important for me to put a face to the story. I want everyone to see photos of the beautiful people I have met. But the violence has escalated to such an extent in Iraq that, for fear of repercussions, I now hesitate to show anyone’s face. I never know who among the audience members might be filming or what their intentions might be.

Holding on to the Human

I am an activist by nature. Whenever I speak publicly about Iraq, I want to end with concrete suggestions for possible actions. People of goodwill want to know what they can do.

On one level, I do not know what to tell them. The damage has already been done. In Iraq I was jolted upright in the middle of the night by explosions. I heard gunshots. I saw cars burning. We had to check our car for sticky bombs. There was little we could do about fake checkpoints, extrajudicial killings and kidnappings—except trust God.

John O’Donohue, the late Irish poet and mystic, spoke in an interview in 2007 about how difficult it is for people to reach and sustain gentleness when they are surrounded by ugly landscapes. He comes from western Ireland, which is exceptionally beautiful. He explained, “There are individuals holding out on frontlines, holding the humane tissue alive in areas of ultimate barbarity, where things are visible that the human eye should never see.” They are able to sustain extreme suffering, he said, because “there is in them some sense of beauty that knows the horizon that we are really called to in some way.” Mr. O’Donohue referred to Pascal, who said you should always “keep something beautiful in your mind.” If we can do this, he said, we can “endure great bleakness.”

A while back a trusted friend in Iraq, a doctor, sent me an e-mail message that said: “Still alive but with poor quality, doing the routine work. We are living, but we want to die once, not every day.” Doctors like my friend, who have remained in the country even when most doctors had to flee because of threats, are among my heroes. They are the ones “holding out on the front lines,” able to withstand barbarity and extreme suffering.

An estimated 118 Iraqis were killed in clashes across the country on Jan. 3.  It takes a good deal of work to get news about Iraq, and we surely do not get enough through mainstream media. In an article in The Huffington Post (12/17/13), Joshua Hersh wrote: “The sheer numbers [of dead] are so overwhelming that they can become numbing…in ways that are shocking.”

More recently, I received a message from a friend in Baghdad who wanted me to know that he might not be able to remain in contact. He has to flee, leaving his wife and children unprotected, as his area is being targeted. I cannot imagine how he and they must be suffering—the youngest just an infant!  All of their frightened faces are in front of me.

As I contemplate the possibility of future travels to Iraq, I wonder how to justify such journeys. Maybe to help carry the weight of others who are suffering; maybe to assure them that they are not alone.  It is beyond me.  We can only trust God that we will be shown the way.  If it is not to be, may God intervene.

I believe there is something we can do as a country, as individuals, as people of conscience, as people of faith, for the people of Iraq. In his preface to The Great Divorce, C. S. Lewis writes: “I do not think that all who choose wrong roads perish; but their rescue consists in being put back on the right road. A wrong sum can be put right: but only by going back till you find the error and working it afresh from that point, never by simply going on. Evil can be undone, but it cannot ‘develop’ into good. Time does not heal it.”

We must go back to where we made the wrong turn in the road. We must acknowledge and take responsibility for the horrific destruction, violence and death we have wrought in Iraq. We must turn aside from the preparation of war and the waging of wars. Evil can be undone, but it is not going to turn into good by simply going on.

Cathy Breen is a member of Maryhouse Catholic Worker in New York City.