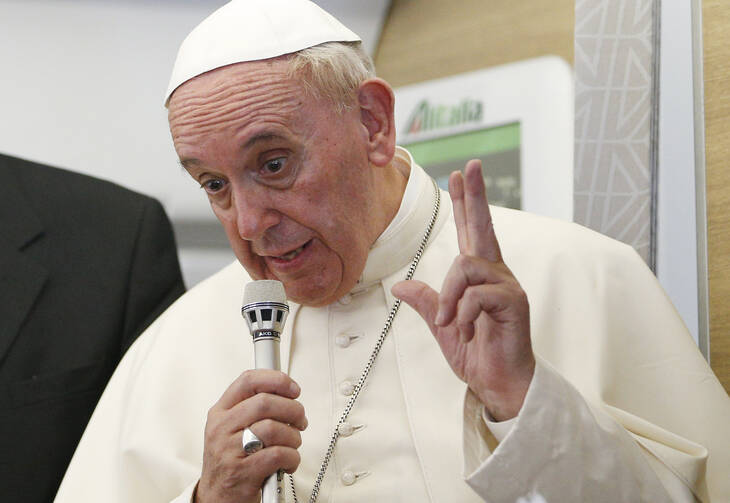 Pope Francis was drawn into the U.S. electoral circus at the close of his Mexico trip in mid-February. During the return flight to Rome, a reporter asked about some comments made by Republican candidate Donald Trump. “A person who thinks only about building walls, wherever they may be, and not of building bridges, is not Christian,” the pope said, emphasizing that he would give the candidate the benefit of the doubt.

These off-the-cuff comments were just enough to begin—again—a small media frenzy. Pundits and pew-sitters alike objected that the pope had no business involving himself in the U.S. elections; others were already agitated by the symbolic moment Francis had orchestrated earlier that day, pausing in prayer alongside the Mexican bank of the Rio Grande for migrants lost attempting to reach the other side.

Many people do not blink when the pope sounds off on issues related to what are perceived as personal morality; he in fact deplored abortion as an “absolute evil” in the same back-of-the-plane press conference without drawing much attention. But when Pope Francis and other church leaders have shared their perspectives on some of the other concerns of contemporary times—typically economic, ecological or social issues—their authority has been challenged and the usefulness of their contributions to the domestic or international dialogue undermined. Mr. Trump himself had earlier described the pope as “political” because of his frequent calls for a humanitarian response to migration.

The pope’s clever response on this note is instructive. Pope Francis embraced the attempted pejorative, moving political away from the squabble and bicker with which it has become associated and restoring some of its Aristotelian splendor—as a descriptive term that should connote the best expression of policymaking reached through civic and civil dialogue. Of course he was political, the pope said; all people who live in society together are by definition political. It is through the political that personal views and concerns are expressed and practical things get done.

Recalling Jonah’s warnings and admonitions to the people of Nineveh, Pope Francis in Ciudad Juárez urged the episcopal and social elite of Mexico to convert before they lead their nation to ruin. Was Francis speaking politically or prophetically in these moments? Is there a difference?

Another frequent objection to “papal overstepping” is that the pope does not have the expertise to comment on weighty matters outside church walls, as if his insights were best reserved for Sunday morning pieties. This is a strange presumption—that well-educated people, informed on the matters of their times, should nonetheless restrict themselves exclusively to matters of personal expertise. What a banal civil discussion that limitation would produce, were it ever prescribed for people outside ecclesiastical leadership.

Yes, the pope speaks with authority on issues outside his personal credentials, and he should be attended to when he does. His experience and erudition are broader and deeper than many suppose. When he speaks of a throwaway economic system, he speaks from a real-world perspective that Catholics in North America would do well to consider. And they may rest assured that the commentary offered by Pope Francis is buttressed by a legion of unseen experts hidden away in the Vatican.

Pope Francis and bishops, domestic and international, not only possess the expertise and the authority to make “political” pronouncements; as the moral and spiritual leaders of the world’s 1.25 billion Catholics, they have an obligation to do so. And Catholics have the obligation to consider prayerfully the instruction they offer. As faithful citizens their vocation is to bring their perspectives into the public forum. Francis offers an example of how to do this fruitfully, speaking freely and assuming the good intentions of people on the other side of an argument. (See “Francis’ Call to Conscience,” by Bishop Stephen E. Blaire.)

Suggestions that Pope Francis and church leaders should demur from important debates because they are too “technical” or “political” convert religion into a pale, flighty thing. In this instance, short-sighted co-religionists ally with confirmed secularists to diminish the vibrant social role religion should play in public discourse, corralling it into a safe liturgical and private preserve.

Resetting expectations about what the pope “should” say would be healthy, psychologically and spiritually. This pope has been a miracle of thinking-out-loud reform. The results can be refreshing and transformative, but it is not a risk-free style of ecclesial leadership. Some missteps are inevitable. Better to learn how to live with that tension without hitting panic buttons whenever something Pope Francis says jars us awake, remembering that being awakened from complacency is never a bad thing.

The Editors
Show Comments (
4
)
Comments are automatically closed two weeks after an article's initial publication. See our comments policy for more.
William Rydberg
6 years 3 months ago
I agree with the points made, however reading this article leaves one with the tonal impression that the Editors might be a little too comfortable with the present American political status quo. Hardly a position one would want to find oneself given the stated lofty goals of the last Society of Jesus General Congregation 35. But after all, America Magazine is over a 100 years old, and the Editorial Board might see this as a time to settle for the current American status quo? No matter their political stripe, I think Americans still want to build a better country with social justice and dignity for all-the last time I looked they are not at end of job yet... Just my opinion... in Christ,
Joshua DeCuir
6 years 3 months ago
"When he speaks of a throwaway economic system, he speaks from a real-world perspective that Catholics in North America would do well to consider. And they may rest assured that the commentary offered by Pope Francis is buttressed by a legion of unseen experts hidden away in the Vatican." That may be so, but it doesn't mean they are inured from criticism. For example, global poverty is at its lowest levels , less than 10% according to the World Bank. http://www.theguardian.com/society/2015/oct/05/world-bank-extreme-poverty-to-fall-below-10-of-world-population-for-first-time Much of the reduction in poverty is the direct result of increased access to cheaper global energy sources. So while I respect the Pope's voice, & seek to discern & listen, I must also say at times he speaks with very broad brushes that overstep & overlook certain counternarratives. It was once taken for granted that this was the case when Catholic progressives object to the Pope's limited direct experience to speak on issues like family planning or even abortion. So are we now at a point where it's "creeping infallibility for me, but not for thee" as long as the Pope agrees with us?
E.Patrick Mosman
6 years 3 months ago
Only one prominent figure,Donald Trump, has spoken about 'building a wall" and the Pope's nuanced remark that it is not Christian to build walls right after he said Mass at the US/Mexico border to honor those who have died trying to enter the US illegally is without a doubt a reference to Mr Trump's religious belief and an entry into the US political fray. The more Pope Francis speaks "off the cuff" before crowds or especially reporters, the more he reminds me of Peter Sellers's Chance the gardener, better known as Chauncey Gardiner, from the movie 'Being There' who spoke simple words, spoken often due to confusion or to a stating of the obvious, which are repeatedly misunderstood as profound and often, in the Pope's case, of a possible/potential change in long held Catholic doctrines or Catholic economic/political positions which are walked back or explained later by a Vatican spokesperson. Is it any wonder that different people hear different signals when the Pope speaks?
Michaelangelo Allocca
6 years 3 months ago
I can barely comprehend the level of narrowmindedness and condescension required to compare Pope Francis with Chance the gardener. [No, actually, I can -- it's precisely the sort of thing people like Trump do: too cowardly to just say "I oppose the pope," they instead say, "he's not an expert, so he's led astray, he's manipulated by the Mexican government, etcetc..."] Do you mistake his humble manner for simple-mindedness, or does your ideological opposition inspire you to accuse him of stupidity because his positions differ from yours? He does in fact have a doctorate from one of the most prestigious universities in Europe, and served as a provincial superior of the Jesuits in two countries and then as archbishop of a major city, before his election. How arrogant and bigoted does one have to be to suggest that he somehow accidentally stumbled in front of a microphone to talk about things outside his competence?