On fatherhood, selective service and a space for nonviolence 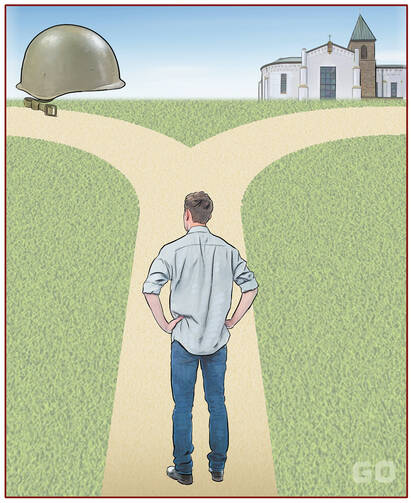 My second son, Crispin, turned 16 this year. He got his first job, which means soon he will be paying for his own cell phone plan and guitar lessons. Also, he has a driver’s permit, with license and driving privileges to follow this summer, if all goes well.

These are significant milestones for any teen, boy or girl, and there are plenty more to come in the years ahead. There is one particular milestone he will share only with his brothers: registering for the draft when he turns 18. I know there is talk these days of requiring young women to do the same—especially in light of the Defense Department’s new policy of opening combat roles to women. The Senate even passed a bill in June that would require women to register.

I was already in my 20s and in college when President Carter rebooted Selective Service, and I remember agonizing with my dorm buddies about whether we would “surrender our freedom,” trudge over to the post office and sign the card. A few of us got cocky, and we postured about refusing to cooperate on account of our “objections” (read: indignation).

The risks of refusing turned out to be pretty high—no federal financial aid for college, for one thing. Moreover, and despite Russian aggression, the possibility of our country being pulled into an armed conflict requiring conscription seemed downright fantastic—we were all too young to have remembered much about Vietnam. In the end, we all relented and registered, although we were definitely chastened. Suddenly, war and killing were not just matinee popcorn fodder.

And nobody talked to us about it—not my dad, not anybody's dad. I am sure, in their minds, there was nothing to talk about. Signing the card was a purely perfunctory act—it was just another government form, and such forms are part of growing up, of getting along in the world of adults. Besides, it was the patriotic thing to do. What is the point of splitting hairs over just war criteria and conscientious objection?

But our dads were wrong. Signing up with the Selective Service System is a grave crossroads of American manhood (soon to be just adulthood, apparently). Given the advent of perpetual war since my own sons were born, and the steady stream of news reports about wartime casualties, post-traumatic stress disorder and G.I. suicides, draft registration has become an occasion for my family to have serious conversations about national defense and our commensurate responsibilities as citizens.

After all, whether Crispin simply registers for a theoretical draft in a couple of years or actually enlists, he will be committing himself to take up arms when called upon, to risk his life and to likely take the lives of others. And this in service of… what? Warcraft and statecraft in our times have not exactly inspired confidence in a national vision, both long-term and short-term, underlying that weighty commitment.

As I anticipate hashing through all this with Crispin, I can at least draw on my experience with his older brother, Benedict. The summer before Ben’s senior year in high school—the summer, that is, when he turned 18—we went on a father-son trip. Our first stop was Thomas Merton’s home base, Kentucky’s Gethsemani Abbey.

It was a huge concession on Ben’s part—what 18-year-old wants to spend two summer days in an isolated abbey with a bunch of silent monks, plus dad?—and I treated our time there together as a tremendous gift, especially when he accompanied me to several retreat talks. In one, Brother Christian spoke of the walls of the monastery as less about shutting out the world than about creating a space—a space free of noise that allowed monks and guests to better focus on God.

After our stay at Gethsemani, we headed up to Bloomington for a college visit at Indiana University. I had hunted around the internet ahead of time for lodging alternatives to pricey motels and come across the Tibetan Mongolian Buddhist Cultural Center just a couple of miles south of the campus. “Look, Ben,” I told him pointing to the website, “another monastery— Buddhist this time. How about we stay in a yurt?”

“I dunno dad,” he winced. “It looks pretty sketchy.”

Nevertheless, I talked him into it, and it ended up being the highlight of the trip. The center's yurts are basically small, circular cottages built to resemble the tents used by Mongolian nomads, and ours came complete with futons and a kitchen, but that was it—no TV or Wi-Fi. Hence, we did not spend much time there, and when we weren’t touring I.U.’s campus or meeting with admissions staff, we strolled the grounds of the center and chatted—yet another gift.

One morning, we met up with a groundskeeper smoothing out one of the gravel paths. His name was Russ, and we engaged him in conversation about the center and its mission of promoting peace. At one point, Russ set aside his rake to spread out his hands about a foot apart. “We can choose to create space for nonviolence,” he said, nodding toward his hands. “That’s the teaching of the Dalai Lama—to step back from aggression.”

It was strikingly similar to the message we had heard just days before from Brother Christian, though this time, instead of a vertical God-focus, the space Russ suggested provided for a horizontal communion of rapprochement and mutuality. It was an image that really stuck with Ben, and it was Russ more than Gethsemani that lingered in our conversations on the trip home as we talked about his impending Selective Service registration.

I am not a pacifist, and I affirm the church’s teaching on resisting aggression, especially as a father. “Legitimate defense can be not only a right but a grave duty,” the Catechism teaches, “for one who is responsible for the lives of others” (No. 2265). If my family were attacked, and there were no chance of creating a space of nonviolence as Russ described, I hope I would be able to defend and protect them, no matter what it took.

Still, there is a long way between a hypothetical family defense and heading overseas to fight wars with no clear objective or will to win. The unprecedented savagery of terrorism and extremism clearly needs to be confronted, but I confess that I am exceedingly ambivalent over how that ought to be undertaken—as is Pope Francis apparently.

He has spoken of “the madness that is war,” calling it “the suicide of humanity, because it kills the heart, it kills precisely that which is the message of the Lord: it kills love!” Yet, the Holy Father also made headlines by intimating that some kind of limited action was nonetheless required to “stop” unjust aggression. “I underscore the verb ‘stop’; I don't say bomb, make war— [just] stop him,” Pope Francis said in reference to Islamic State in Iraq. “The means by which he may be stopped should be evaluated.”

Yes, evaluated—but who is going to do that evaluation and on what basis? As my own boys evaluate a decision to sign up for the draft or enlist in the military, I feel obliged to urge them to proceed with somberness and caution. Considering the remaining field of candidates aspiring to become commander in chief, I do not expect to be altering that approach in the foreseeable future.

Richard Becker, R.N., is a father of seven and an assistant professor of nursing at Bethel College in Mishawaka, Ind.

Show Comments (
1
)
Comments are automatically closed two weeks after an article's initial publication. See our comments policy for more.
Joseph J Dunn
5 years 11 months ago
"Who is going to do that evaluation and on what basis?" That question, I suspect, is at the heart of your concern. One weakness in our country's reliance on an all-volunteer military is that, while the military is highly effective in conducting the missions assigned to it, this policy confines risk to relatively few of our population. I wonder if the burden of justifying the use of our military would fall more heavily upon government officials if all of us of military age, or our own sons (and daughters) of military age, were more immediately exposed to actual service, not just to signing the Selective Service form. Would we be more demanding of proof about those 'weapons of mass destruction'? Or that destroyer in the Gulf of Tonkin? What really caused that explosion on the Maine? All naturalized U.S. citizens take an oath of allegiance that includes: "...that I will bear arms on behalf of the United States when required by the law; that I will perform noncombatant service in the Armed Forces of the United States when required by the law;... and that I take this obligation freely, without any mental reservation or purpose of evasion;" Surely native born citizens have the same burden. Few would disavow that obligation in time of direct or imminent attack. But decisions to commit military forces to foreign lands in less than urgent circumstances might be more fully debated--'evaluated'--by all of us with 'somberness and caution', as you say, if the risks and burdens were shared widely.