¡Adíos Adolfo! 30th Superior General of the Jesuits steps down. 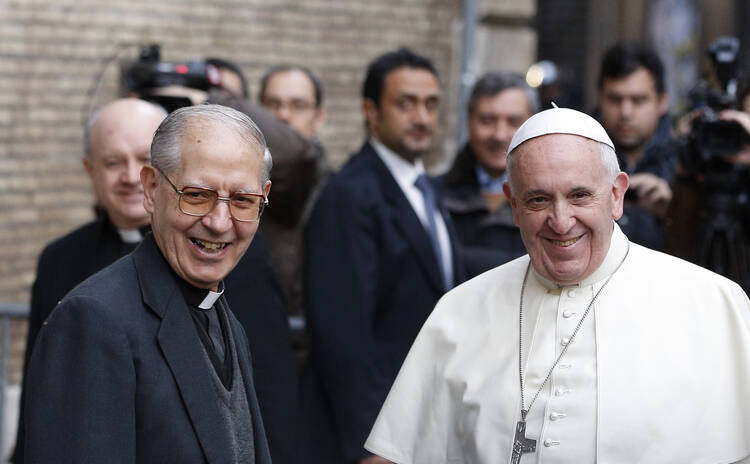 The Thirty-Sixth General Congregation of the Society of Jesus began in Rome on Oct. 2. Gathering Jesuit delegates from around the world, a general congregation is the highest authority in the order. But these worldwide assemblies are rare, convoked only “for matters of greater moment.” This congregation, like the one that preceded it in 2008, has first to accept the resignation of the current superior general, Adolfo Nicolás, S.J., who at age 80 wants to step down, and then elect his successor.

The job of the general involves a lot of time in the office, reading reports, deciding issues presented for his approval, appointing local superiors and writing letters. He attends many meetings, visiting with groups of regional superiors and other significant gatherings, talking, encouraging and supporting. He is not involved in the everyday running of schools, spiritual centers or media work, but his oversight helps these Jesuit missions succeed. Father Nicolás did all this with grace and skill. He was born and grew up in Spain, later went to Japan as a missionary and was named provincial there in 1993. Father Nicolás has delivered significant addresses on education and has been involved in refugee issues among many other initiatives.

The Society of Jesus owes Father Nicolás a great debt of gratitude for his careful leadership. We at America have been graced with his guidance during these years of rapid change. We ask our readers and viewers to join us in praying for the success of this general congregation, and in saying, “¡Gracias, Adolfo Nicolás! Thank you very much!”

The Editors
Show Comments (
1
)
Comments are automatically closed two weeks after an article's initial publication. See our comments policy for more.
William Rydberg
5 years 1 month ago
So who is the new Father General, voting must be long over by now...