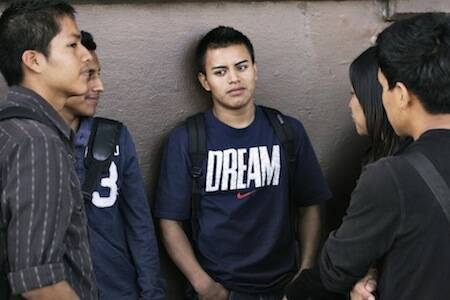 According to the Gospels, when witnesses to the resurrection encountered the risen Christ, he was not always immediately recognized. This was the Evangelists’ way of answering that basic question posed in the early church: Where is Jesus? If he still lives, how can we find him? Luke’s response is in the story of the disciples on the road to Emmaus. Jesus approaches them “in another form,” explains the Scriptures and finally reveals his identity during a meal when “they recognized him in the breaking of the bread.” Luke’s point is clear: We discover Jesus in the stranger on the road.

Who is today’s stranger? We find him or her in those of whom Pope Francis spoke at his inaugural Mass—those we are called to “protect.” Pope Francis spoke especially of “the poorest, the weakest, the least important, those whom Matthew lists in the final judgment on love: the hungry, the thirsty, the stranger, the naked, the sick and those in prison.” In our world today, this undoubtedly includes undocumented immigrants.

The Catholic Church in the United States is historically an immigrant church. Many universities in the United States trace their origins to the 19th century, when religious orders arrived in a population center, built a chapel, enlarged it to a church, added a school, enlarged that to a high school and expanded that into a college and a university. This helped to move Catholic immigrants into mainstream American life.

Obviously, much has changed since then. In the 19th century the goal of “social justice” movements was to fight the inequality produced by the industrial revolution. Today the pursuit of justice calls us to work for immigration reform. Of the 65,000 undocumented students who graduate from high school annually, roughly 5 to 10 percent go on to college, and only a few receive scholarships. The great majority go to community colleges, and many drop out.

A large number of today’s undocumented young adults were brought to the United States as children by parents who either overstayed a legal visit or entered the country without authorization. Facing difficult circumstances, many either do not go to college or, once there, fail out. Unchecked, these problems can create a generation of talented men and women who will never develop their full potential and contribute to the society they once sought to join. They fear deportation, are barred from professions—as teachers, doctors, nurses, engineers—they once dreamed of and are blocked from participating in many of the activities of their peers. They cannot receive most federal aid or work-study stipends. In short, their lives are stunted by psychological and social isolation.

Various universities have programs to assist them. Notre Dame’s renowned Alliance for Catholic Education, in order to “welcome the strangers among us,” helps prepare some of its teachers to specialize in teaching students who speak a language other than English at home. In 2010 the Ford Foundation gave Fairfield University, in Connecticut, a substantial grant to study the situation of undocumented students at the 28 Jesuit colleges and universities. Joined by Loyola University Chicago and Santa Clara University, they researched and interviewed immigrant students, administrators and faculty at six schools, plus officers involved in admissions, student affairs and financial aid at all 28 schools. They found that 76 percent of all staff members surveyed agreed that enrolling and supporting undocumented students fits the mission of their institution, but 40 percent were not aware of any outreach programs to support them.

What can be done? Santa Clara is the only Jesuit institution with a scholarship fund exclusively for undocumented immigrants. That will change. Twenty-five presidents of the 28 Jesuit colleges and universities have signed a statement promising support for documented and undocumented students alike. These schools will emphasize in their mission statements that they exist to serve all students, regardless of immigration status. They will explore establishing a “common fund” to finance scholarships for all, create a list of outside scholarships for which immigrants are eligible and find ways to help pay for books, lab fees and transportation.

Finally, according to a position paper prepared by Fairfield University, the schools recognize that the current situation “can lock families of particular ethnic backgrounds into enclaves or ghettoes, instilling an atmosphere of fear, misunderstanding and disinformation.” These universities will respect the privacy of undocumented students and help the students fulfill both their family obligations and fully participate in university life.

Christians’ desire to help the stranger goes back to the risen Christ, “the stranger” who revealed himself on the road to the downcast disciples. What might have happened if the disciples had not invited this stranger to remain with them?