Faith and family in ‘Blue Bloods’ 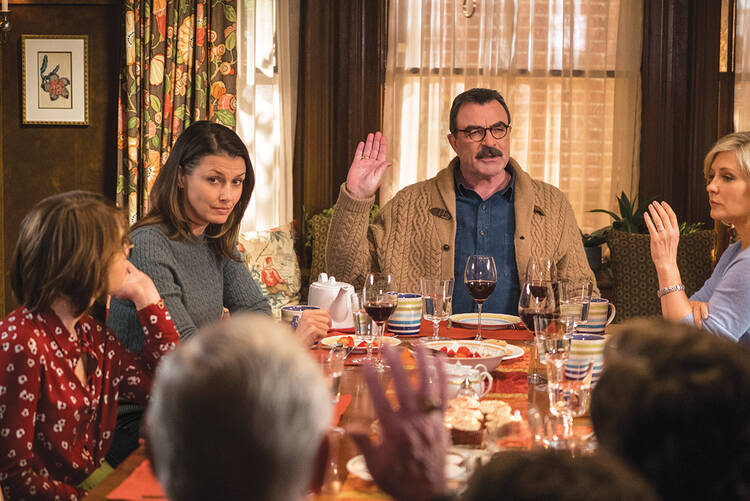 The New York Police Department, the largest police force in the United States, is also one of the most mythologized. It is a favorite of writers and audiences alike when it comes to television, books and film. Of the many shows featuring the N.Y.P.D., few have been so pertinent and striking as the hit series Blue Bloods. Now in its sixth season, the show revolves around Frank Reagan (portrayed by Tom Selleck), a Vietnam veteran, 9/11 first responder and the current police commissioner of the N.Y.P.D. For the Reagan family, police work and the law is the family business.

Frank Reagan’s father, Henry (Len Cariou), is the former police commissioner; Danny Reagan (Donnie Wahlberg) is a hot-headed and often unorthodox detective who more often than not solves the toughest serious crimes; Erin Reagan (Bridget Moynahan) is a rising assistant district attorney in Manhattan whose letter-of-the-law style often comes into direct conflict with her brother Danny’s unorthodoxy; and Jamie Reagan (Will Estes), the youngest of the Reagan clan, a Harvard-educated lawyer turned cop, who often provides a balance to the arguments of his other two siblings. A third brother, Joe, was a police officer who was killed in the line of duty.

The world of “Blue Bloods” is a morally complex and provocative one that regularly raises questions about justice and fairness, right and wrong, professionalism and humanity. There is clear conflict, for example, in family conversations surrounding police tactics, with one arguing that a cop-killer may not make it to the jail alive and another arguing that all individuals have rights, regardless of their actions.

It is most often the explosive episodes involving Danny, the family member most willing to cross certain lines to ensure justice, and Erin, who seeks to have the most by-the-book prosecutions possible to ensure fairness, that bring up the harshest dilemmas. In the first season, for example, Danny forces a child-abductor to tell him where the missing girl is by beating the information out of him. While he manages to find the little girl in time, the abductor may walk free because his confession was coerced.

Recent episodes are refreshing in their timeliness. They tackle contemporary, real-world issues that viewers can immediately relate to, like the use of body cameras on patrol officers, sexual assault on college campuses, protest movements, human trafficking, drug addiction, terrorism—the list is long. But it is the setting in which many of these discussions play out that is most appealing: the Sunday dinner table. The Reagans, a practicing Catholic family whose faith plays a significant role in their lives and thus the series, gather every Sunday after Mass for a family dinner. It is across the long, food-laden table that the various generations of the Reagan family reveal their perspectives and moral understandings, gained through experience, time, education or some combination of the three.

Compared with the unpredictable nature of their jobs, the family dinner table scenes provide a stable and nurturing setting for the questions raised by each episode to play out. The family dinner, which some may consider a throwback to another era in America, provides an integral service in that it allows for the Reagans to have the same laughs, the same fights, the same in-depth discussions that so many Americans remember and still have today. It welcomes the viewer as part of the family.

One of the biggest criticisms of the show is that it tends to be too archetypal in the way it portrays the Reagan family: An Irish-Catholic American family dedicates itself to the public good through police work in order to support their families, with the three oldest men in the Reagan family being veterans of the U.S. Marine Corps, each of whom served overseas in three different wars. While this all-American family is certainly relatable, it sometimes strikes the viewer as clichéd. Similar clichés strike when it comes to the relationship between Commissioner Frank Reagan and the Catholic Church. For example, when the commissioner and the fictional archbishop of New York disagree over issues of gay and lesbian rights, both sides lack the real-life nuance often given to such issues. But it is in the quieter moments that their Catholic faith shines. Danny goes to his priest for counseling; Frank has lunch with a boyhood friend who is now a monsignor. So while there are larger overtones that are false stereotypes, there are also genuinely beautiful displays of faith and sacrament throughout the series.

“Blue Bloods” makes us examine our own motives, relationships and faith. Not only can viewers join in as the Reagans work out the typical whodunnit scenario, but we are welcome to accompany the Reagans on their quest to discern right from wrong and how and when one crosses that line.

Nicholas D. Sawicki is a senior at Fordham University, Bronx, N.Y., focusing his studies on theology and history.

@NicholasSawick1
Show Comments (
3
)
Comments are automatically closed two weeks after an article's initial publication. See our comments policy for more.
Tom Fields
5 years 11 months ago
Fordham is a great school! However, your essay gets a B-. "...too archetypal"---I think not. The show is successful because it is so real. My father was FDNY and served in the Navy in WWII: I served 2 tours in Vietnam and had a US Army career. My son went to USMA, served a year in Iraq. The "Reagans" have a divorced daughter---a difficult teen, some serious family fights, marriage stresses, a grandmother who died too young and more. Their faith is real and it helps them to fight many negative forces and to stay together---while keeping their Catholic identity.----(more so than some "Catholic" Universities!
Monica Doyle
5 years 11 months ago
One of my favorite shows, whether prime time or Ion television reruns. Part of it is escapism, after a long day at work. Part is enjoying the family relationships. I wish there was a matriarch though, instead of two patriarchs.
Monica Doyle
5 years 11 months ago
Sorry about tapping submit twice.