A Vatican II Pope: Francis lives the council's message in word and deed

A Vatican II Pope: Francis lives the council's message in word and deed 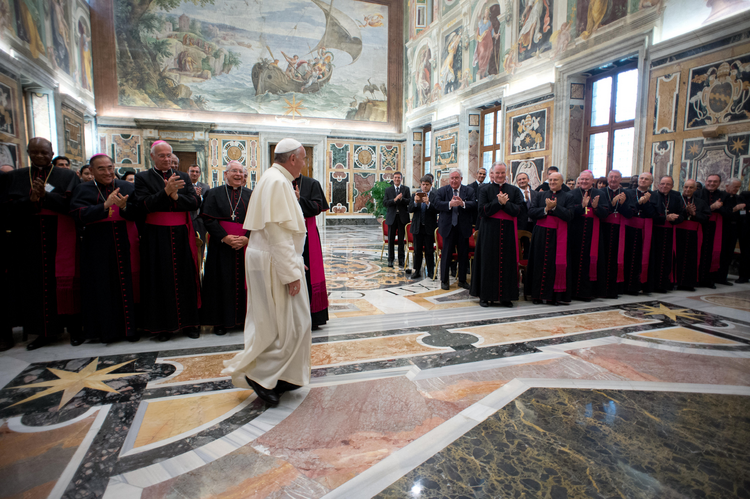 No pope has ever before given an interview with the press. The event, as seen in the long history of the successors of Peter, is absolutely unprecedented. It is just as unprecedented for a pope to reveal so much about himself as a human being, to talk about his weaknesses and to name his mistakes and express regret for them. I could go on. But we should not wonder that the interview has caused such a sensation.

We should not, however, wonder so much about the basic message of the interview. In it Pope Francis simply put into words the message he has been preaching by his actions and style of behavior since the moment he was elected. What is that message? I think of the mandate Pope John XXIII gave to Vatican II the day the council opened. He told the bishops that the council should show the church to be “the loving mother of all, benign, patient, full of mercy and goodness.” The council took that mandate seriously. It did its best to make it operative in its decrees, as when it described the church as the people of God, as when it extended a hand in friendship to other churches and to other religions, as when it addressed its final document to all persons of good will.

The council was more concerned with how the church is than with what it is, even if those two things cannot really be separated. The council was concerned with how the church behaves, with how it bears itself toward its members and toward those who are not members. Does it behave first and foremost as the loving mother of all or does it behave as the world’s moral policeman? Francis has clearly chosen the former.

But is he really going to change things? Well, don’t you think he has already changed things—big time? He has changed priorities, and a change in priorities is a change big time for any organization. By taking the name Francis, his very first decision as pope, he made a first proclamation of his priorities for the church. As he explained it, he chose the name for three reasons: because of Francis’ love of the poor, his care for nature and his love of peace. Peace, care for the environment, and care for the poor of this world. In choosing the name Francis, he wrote his first encyclical, and he did so in a way more powerful than any written document. He did the same when he washed the feet of the Muslim woman.

There is an old saying you may be familiar with: actions speak louder than words. There is another: what you are thunders so loud I cannot hear what you are saying. By his actions Francis has been revealing himself, and those actions have for six months been thundering through the church and through the world beyond it.

Show Comments (
9
)
Comments are automatically closed two weeks after an article's initial publication. See our comments policy for more.
Frank Hartge
7 years 1 month ago
With all respect, it is simply not true that "No pope has ever before given an interview with the press." Benedict XVI granted at least two book-length interviews to German journalist Peter Seewald.
Cody Serra
7 years 1 month ago
Perhaps the reason we do not remember Benedict XVI interviews so well is due to his deep theological language and academic style. Francis speaks plainly, in a way everybody can understand, even without a strong theological, philosophical, ecclesial background.
Roberta Lavin
7 years 1 month ago
I agree. I spend a lot of time teaching students to speak in language a patient can understand. If the Church is like a field hospital then she must talk to the wounded in language that is easily understood and Pope Francis is doing just that.
Thomas Paprocki
7 years 1 month ago
There is also the book-length collaboration between Pope John Paul II and journalist Vittorio Messori published by Random House in 1994 as Crossing the Threshold of Hope, in which John Paul answered twenty interview questions. In terms of a Pope revealing much about himself as a human being, Pope John Paul II gave wide access to George Weigel in writing the papal biography, Witness to Hope.
CAROL STANTON
7 years 1 month ago
Not to quibble, but it seems fair to say that this interview was unprecedented in the sense that it was intended for a more immediate world press (albeit Jesuit) than the book related interviews. It seems different in form, breadth and timeliness. This is not to suggest that the other two Popes were any less accommodating. I would venture to guess, however, that their questions may have been more vetted or managed than these were. I could be wrong.
Roberta Lavin
7 years 1 month ago
I do think he has already begun to change things. Our tone is changing. Our public image is changing. Our priorities are changing. The Church is being presented publicly as “the loving mother of all, benign, patient, full of mercy and goodness.” He is the one doing this and now it is up to us to actually walk with him.
Frank Hartge
7 years 1 month ago
Interesting observations on Pope Francis' use of language... http://thesensiblebond.blogspot.co.uk/2013/09/the-phoney-war-in-church-five.html
Bruce Snowden
7 years 1 month ago
Jesuit priest John W. O’Malley ends his essay on Pope Francis, titled, “A Vatican II Pope,” with two axioms, the latter saying, “What you are thunders so loud I cannot hear what you are saying." Reminiscing, this kicks me back if I have it right, to Fr. O’Malley’s, “The Eye And I” which deals profoundly with the sometimes unexpected variations in natural creation, leading to the conclusion that the exact meaning of “Omnipotence” may have to be revisited, even redefined. I like that thought! This links to one of my favorite books, “Creation Untamed” by Terence Fretheim, wherein the author tries to come to grips with the tool of evolution in the hand of God, evolution acting it would seem permissively independent of the Creator, yes, attentive to Divine Omnipotence, but delightfully roaming free to twist and turn at will. Teilhard did say in his "The Phenomenon Of Man" "God makes things make themselves." This doesn't diminish the Godhead, explaining better that God loves to share including his act of creation. See an example of God's sharing as in Baptism through which "we share in the Divine Nature." Almost unfathomable isn't it? What I’m trying to say with far too many words is, just as the true meaning of Omnipotence may need rethinking, redefining, so too, the “thunder” the “what” of Pope Francis the teacher, may (is) pointing to a rethinking, a redefinition of what the papacy in relation to the People of God, the Church, is all about. Then the “hospitalized Church” as Pope Francis might say, will better “hear” what the Shepherd who daily smells more and more like the sheep is saying. Yes, Pope Francis is truly a Vatican II Pope!
Jim Hess
7 years ago
Yes! Creation is ongoing, and God has made us junior partners in it. It is a tremendous responsibility.

John W. O'Malley, S.J., is university professor, theology department, at Georgetown University and author of What Happened at Vatican II.