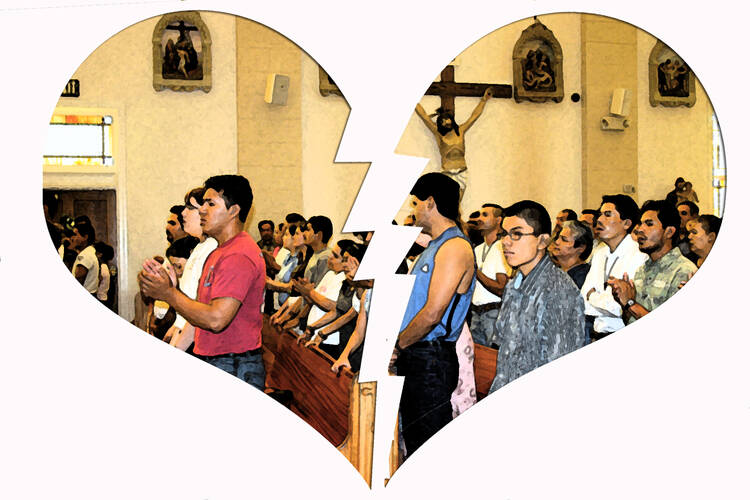 Heartbreak Hill is a famously punishing stretch of the Boston Marathon, as anyone who has run the race, or watched it, can tell you. Just on the other side of this long steep climb through Chestnut Hill, Mass., lies St. Ignatius Church, where I have been pastor for almost 25 years. The building lies on the periphery of the Boston College campus and draws parishioners from all over the metropolitan area.

One of these parishioners is a man I will call Jay. He is not only a member of our Latino community but an energizing force in the parish. Jay has been an active participant in the coro that sings for our Spanish Mass for the past few years. He plays the bass and never misses a Sunday. But that changed last fall.

One day I noticed that Jay was not playing with us at liturgy. His presence was sorely missed, not just for his playing but for his thoughtfulness. He would always get to the church early so he could set things up, for example. I wondered why he wasn’t there this particular Sunday. I wondered too why his wife hadn’t come with their newborn and young son. Later in the week I received the news that Jay was facing deportation. He had been stopped for a minor traffic violation and his undocumented status had come to light. He was immediately detained and jailed. An error in judgment that might have resulted in a ticket or warning for most of us had brought Jay a life-changing sentence.

In addition to being a faithful parishioner and musician at St. Ignatius, as well as a loving husband and father, Jay is also an excellent mechanic, with his own garage. He took pity on me once when he saw how banged up my car was and did all the repairs for next to nothing. Jay and his family had managed to create a meaningful life here in the United States, despite their undocumented status.

Like so many of our Latino brothers and sisters, he had become a contributor to the local economy, the life of the community and the church. But because he is illegal—or more properly, sin documentos—he does not have a prayer. Our bewildering and complex immigration system at present offers him no path to citizenship and no way out of his illegal status. I never realized that Jay was one of the many people who bear the weight of being labeled as “undocumented.” Not that it would have made a difference. The only document that mattered to me as his pastor was the one that he received at his baptism. Jay was simply a brother in Christ, un hermano en Cristo. That was all the documentation he needed.

St. Ignatius is one of those very dynamic parishes with beautiful liturgies, excellent preaching and many diverse programs in spiritual development, faith formation and outreach. When I became pastor of St. Ignatius—a parish of mostly middle to upper-class families with more graduate degrees than you can count—I never imagined that one day I would also pastor parishioners who were predominantly Spanish-speaking, few of whom had the economic or educational advantages of our English-speaking parishioners.

For the most part, the coming together of these two communities in our midst has broadened our perspective on the church. And the growing number of Latino parishioners surely reflects the changing demographics of the U.S. church at large, where 40 percent of all Catholics, and half of those under the age of 25, are Spanish-speaking. Their customs, language, music and style of worship have enriched the parish community enormously. Whether through the bilingual celebration of Our Lady of Guadalupe, mariachis and all, or the rituals accompanying the Day of the Dead, El Día de los Muertos, our Latino parishioners’ expressions of faith have challenged the rest of us to see and experience the body of Christ in a more multicultural way.

But then there is the Heartbreak. What for me began as the joy of celebrating colorful and spirited liturgies in Spanish (and I confess a welcome respite from the often more somber rituals and seemingly unintelligible prayers of the new English version) has now drawn me into the heartbreaking sorrow of seeing the lives, livelihoods and families of very good people torn apart by our current immigration policies. What happened to Jay and his family over the past days is not an isolated heartbreak. It is happening to others in faith communities around the country and could happen again within ours.

Something has begun to change for us as a parish community. We have always had impressive outreach programs. We serve the homeless, the hungry, refugees and many others in need. We have a sister parish in West Kingston, Jamaica, where we are building a playground in an otherwise devastated neighborhood. All of these are wonderful charitable works. But now, given the harsh and punitive realities facing our Latino brothers and sisters, the cries for justice and compassion are coming from within, from families who are not just distant beneficiaries but who belong to the heart of our parish community.

Although my heart wants only to be thankful for so many gifts I receive as pastor of a wonderful parish, it also breaks for one of the “least of my brothers” whose life will never be the same and whose family was without him during the holiday season. After being held in a local detention center, Jay was deported to Guatemala. His children, who are all U.S. citizens, joined him there soon after. His wife remains in the United States, for now, trying to put the family’s affairs in order before she travels to be with her family in Guatemala.

As I reflected on the Gospel for the last Sunday of the liturgical year, I could not help but read its message as one of “truth spoken to power.” I cannot help but think of my Latino brothers and sisters who are trying to speak the truth of their lives to the powers that be. Like Jesus who carried his cross up the hill of Golgotha, Jay and so many of our undocumented brothers and sisters are carrying theirs up their own Heartbreak Hill.

Show Comments (
1
)
Comments are automatically closed two weeks after an article's initial publication. See our comments policy for more.
Robert O'Connell
9 years 11 months ago
Jay made the decision to come to the Us, built a better life than he deemed feasible at the place he left, and did so without the benefit of status offered by current immigration law: is he due some sort of preferential consideration as a result? To some extent, the essence of Christianity is to love our neighbor as Jesus loves us. So . . . How can we truly help Jay now?