The Tyranny of Talk 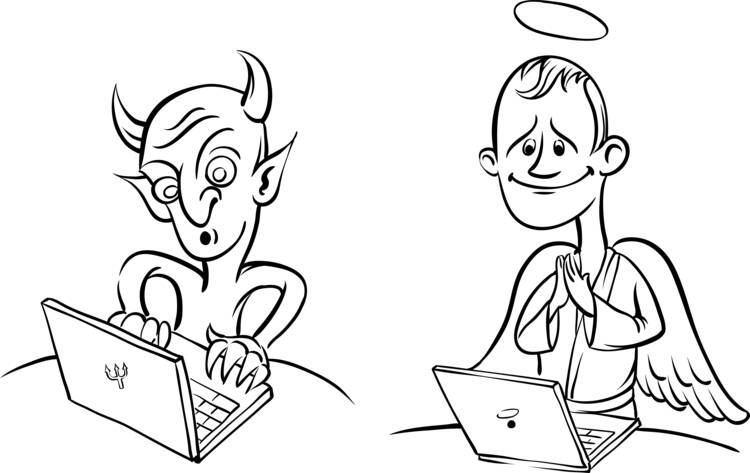 “What is the difference between scandal and gossip?” Lord Windermere asks.

“Oh, gossip is charming!” Graham replies. “History is merely gossip. But scandal is gossip made tedious by morality.”

It is one of the small miracles of Pope Francis’ pontificate that he rarely makes morality seem tedious. Even when he talks bluntly about our human flaws—and the pope is nothing if not blunt—he does so in a way that engages rather than alienates his audience. Listening to Pope Francis, you want to be a better Christian, not because you feel guilty, but because you want to rise to the occasion and accept his invitation to follow the Christian path.

Consider the pope’s remarks on, well, gossip. Francis has rarely been more plainspoken than when talking about the “terrorism of gossip.” Over the 18 months of his pontificate, he has railed against that evil on at least four occasions. In September he went so far as to say that those who judge or speak badly about others are “Christian murderers.”

“It’s so rotten, gossip,” he said in February. “At the beginning, it seems to be something enjoyable and fun, like a piece of candy. But at the end, it fills the heart with bitterness and also poisons us.”

It is a harsh judgment, but one that resonates at a time when social media and apps like Snapchat can make gossip go viral—and visual. The verbal bullying of young people, which has periodically attracted widespread attention following tragic teen suicides, is really just gossip by another name. For the pope, there is no difference between scandal and gossip. In fact, gossip may be more insidious because it disguises itself as idle, some would say harmless chatter. What harm can come from talking about someone else when he or she will never find out?

Plenty: “Those who live judging their neighbor, speaking ill of their neighbor, are hypocrites, because they lack the strength and the courage to look to their own shortcomings.” For Pope Francis gossip is not only harmful because it tears down our fellow human beings, but because it diverts our attention away from what is most important: our own Christian behavior.

The pope knows of what he speaks. When Cardinal Jorge Bergoglio was elected pope, some of his fellow Jesuits greeted the announcement with wariness because of reports of his authoritarian behavior as provincial in Argentina. It turns out that information was 40 years old; in his interview in America (9/30/13), the pope said that he learned from his mistakes: “It was my authoritarian way of making decisions that created problems.” As Thomas J. Reese, S.J., wrote in The National Catholic Reporter, “That some Jesuits never recognized this conversion and failed to embrace him as our brother is our sin.”

It is a sin the pope intends to confront head on. It does not seem mere coincidence that he brought up the matter recently in his remarks to superiors of men’s religious orders in Italy. “Please, don’t let the terrorism of gossip exist among you. Throw it out. Let there be fraternity. And if you have something against your brother, tell him to his face. Sometimes it might end in fisticuffs. That’s not a problem. It’s always better than the terrorism of gossip.”

Gossip, as the pope sees it, is a handy tool for the devil—another one of the leitmotifs of his speeches. For him the devil is not a symbol or metaphor but a real force, “whose greatest achievement in these times,” Cardinal Jorge Bergoglio wrote in 2010, “may be making people believe he does not exist.” Pointing to the power of gossip is one way the pope is pointing to the devil at work.

Any discussion of gossip is incomplete without an examination of our own sins. The secular media are often chastised because of their appetite for the salacious, but the Catholic media are sometimes guilty of engaging in gossip too. Catholic blogs that rail, sometimes anonymously, against their fellow believers are especially culpable. But so are Catholic publications, including at times America, that seize upon opportunities to chronicle the missteps of their critics.

What, then, is the alternative? “I tell you the truth,” Pope Francis said in February. “I am convinced that if each one of us would purposely avoid gossip, at the end, we would become a saint! It’s a beautiful path!”

It may not be the easiest path to walk for those of us who enjoy the odd bit of juicy information about our neighbor. But if we trust in Jesus, and “[lay] aside...all evil speakings” (1 Pt 2:1), the fleeting pleasures of gossip will give way to the enduring witness of charity.