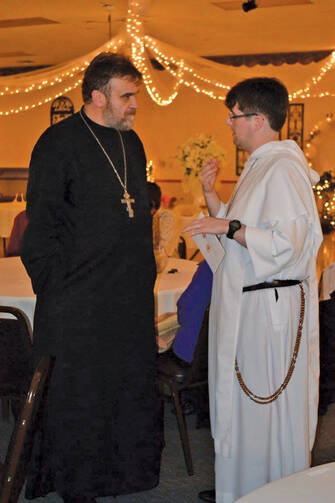 I recently encountered an Orthodox priest who was taking a group of well-known Russian iconographers to look at religious art at the St. Louis Art Museum. I had met him a little earlier when visiting his parish. He introduced me to the group, in Russian, as a “uniate priest.” He likely never intended anything disparaging by this, but the label rang in my ears.

The term uniate, while sometimes used by Eastern Catholics themselves, originally carried a disparaging connotation. It was used after the Union of Brest (1596) by Orthodox people to identify those previously Orthodox members of the clergy and laypeople who had agreed to the “union” with Rome. Its foreign-sounding character connoted submission to the “Roman foreigners.” Today, given the term’s history, it is avoided in any official discussions, even though it continues to be used without any ill will by some Orthodox.

But those past tensions continue to play out in Catholic-Orthodox dialogue and in the popular Orthodox mind. A historic Great and Holy Synod—a synod of all the worldwide episcopal primates of the Orthodox churches—will take place at the Orthodox Academy of Crete from June 19 to 27. While not an ecumenical council, it is in some ways parallel in significance to the Second Vatican Council. There has not been such a meeting among the Orthodox for many hundreds of years, and the synod, like Vatican II, will deal with the church’s relations to the modern world.

But the release of a preparatory synod document on relations with non-Orthodox Christians occasioned what might seem to outsiders a surprising amount of criticism among some Orthodox. There is a significant and vocal minority of Orthodox who fear that any ecumenical activity will involve compromising the doctrine that there is no salvation outside the Orthodox Church. This has been termed the “pan-heresy of ecumenism,” insofar as these people perceive ecumenism to rest on doctrinal indifferentism and disregard for truth. Catholics familiar with the history of the Second Vatican Council will likely recall similar criticisms voiced by Catholic traditionalist groups in regard to ecumenism. It is not an unfitting comparison in tenor or mentality.

As an adopted son of the Eastern Catholic churches, I have a vested interest in the success of the Holy and Great Synod.

My acquaintance with the Eastern Catholic churches began when I was in elementary school. Our home in Ohio was relatively close to many Eastern Catholics, both in our city of Toledo and in nearby Detroit. My father frequently took me to a nearby Byzantine-Ruthenian Catholic Church, and, because my Hungarian relatives lived in Cleveland, an émigré hotspot, I was often able to visit the Melkites and the Maronites located on either side of my grandparents’ Latin parish. Before finishing high school, I had become acquainted with almost every liturgical tradition among the 23 Eastern Catholic churches.

My oldest memory of an Eastern liturgy is not of the clouds of incense, however much that might give a mystical glow to everything else, but the use of terms like consubstantial and unapproachable light in church. It struck me that the people I visited believed something important and life-affecting—something that involved truth. I was being exposed to a whole field of theological belief held in common. This encounter with a single, omnipresent truth set me on an inevitable path toward either theology or philosophy. What surprised me, though, was how I would become a part of the Eastern churches later in my life.

After joining the Dominican friars, I maintained connections with the Byzantine parishes I came upon. Few Dominicans serve the Byzantine liturgy, and I did not personally expect to do so. Near our priory in St. Louis, where I spent my time in study for the priesthood, is a small mission of the Ruthenian Catholic Church, which has its roots in modern-day Ukraine. It is a vibrant little group of around 150 people, many of whom have to drive quite far to attend an Eastern liturgy. After I began to attend sporadically, a parishioner asked if I had thought of becoming biritual—that is, receiving faculties from a Byzantine bishop to celebrate the Divine Liturgy and sacraments. They noted that there are few priests in service, and many do not have replacements if they take vacations or fall ill. Before I knew it, I was celebrating my first Mass as Divine Liturgy after my priestly ordination.

Perhaps it is not surprising, therefore, that my perspective on the Orthodox-Catholic divide is different from that of many others or that I take a particular interest in ecumenism. But through my experience with Eastern churches and their relations with both the Latin and Orthodox worlds, I have come to a profound appreciation for something beyond the standard terms of engagement. This is best described as the unifying force of truth—that same truth I encountered as a boy. Typically, we might think of love as the great unifier. But love by itself cannot exist without a definite object. We have to be able to conceive rightly of what we love; otherwise, we love an idol, a fiction. But if we jointly acknowledge the right of something to our love, the power of that recognition brings us together. The union that is an effect of love is, in turn, an effect of a shared grasp of some truth about the world.

It is easy for most Catholics to see their shared faith with the Orthodox. We have almost every belief in common, and modern theologians have hammered out agreements on the filioque (the Latin creedal declaration that the Holy Spirit proceeds from God the Father “and the Son”) and other issues. The nature of the papacy is practically the only serious theological issue at stake, from the Catholic perspective. The Second Vatican Council brought much of this home to the Catholic faithful, with subsequent recommendation from our popes that the church “breathe with two lungs,” East and West.

But for many Orthodox it remains difficult to look at Catholics and see anything other than innovation, with heretical overtones. In the aftermath of the historic meeting in February between the Russian Orthodox Patriarch Kirill of Moscow and Pope Francis, I read and watched some Orthodox register their protest against the patriarch’s affirmation in a joint declaration that the Greek Catholics have “a right to exist.” In response, some said explicitly that there is no such thing as a “legitimate” Eastern Catholic. Orthodox “fundamentalism” was out in the open.

What encourages me in the midst of this is that I have found, aside from the many intelligent Orthodox theologians and laity, that those most opposed to dialogue often carry rather absurd misconceptions about the Catholic faith: that “indulgences” are licenses from the pope to be allowed to commit a certain number of sins; that Catholics believe Mary’s immaculate conception means she was not a real human being like Christ; that the use of unleavened bread at Mass is part of a plot by the pope to make us all Jewish.

Here, though, I think the truth will ultimately set us free. I have no interest in syncretistic views of ecumenism that would deny the exclusive nature of salvation or discard Orthodox or Catholic doctrine for the sake of a false unity; such is the Catholic Church’s official view as well. Much of the distrust, however, is built on misapprehensions about Catholicism. I have faith that dialogue can dissolve ignorance, even if it takes time. In the world of modern communications, we no longer have the Mediterranean or imperial legates to keep our people from seeing what we all really believe.

At the time of the Union of Brest, when many Orthodox united in communion with the Bishop of Rome, some of these who united were killed for their commitment. While they were seen as traitors to their brothers and sisters among the Orthodox, we Eastern Catholics continue to commemorate St. Josaphat, for example, as the heroic martyr who claimed that he would be happy to give his life for the people who killed him. Josaphat, and all the others unnamed, died not for the pope, but to preserve the Catholic ideal of one shared apostolic faith and one Eucharist. St. Paul’s dictum can be applied here: Peter is only a “servant through whom [they] came to believe” (1 Cor 3:5); it is Christ, head of the church, for whom they died.

Eastern Catholics struggle for our faith from both sides—from Westerners who do not understand us and from Easterners who think we are traitors—but this has only made Christ’s church stronger. If Eastern Catholics had abdicated to either party, the affirmations of Vatican II in regard to the East would never have occurred. It was the sacrifices of Eastern Catholics for unity without compromising the truth that led to true love.

When I was introduced to the iconographer museum visitors as a “uniate,” I felt a subtle tinge of pride. I might not have initially planned on it when I become a Dominican friar, but I was now being identified with the same people that produced those martyrs of unity. What my experience with the Eastern Catholics has taught me is that to suffer and die for love of our brothers, for unity in the faith and for the communion of the Holy Spirit has always been the best answer to ecumenical differences.

While I cannot speak for them, I believe in the same faith I hear in my Orthodox brothers and sisters, and I pray for them to discover the same in me. I will be praying for the success of their synod this June, and I will be praying every time I celebrate the Divine Liturgy for unity between East and West. Commending ourselves, one another and our whole life to Christ our God, we look for the mercy of God upon our churches. Our Lord surely despises not a good uniate.

Correction: June 17, 2016
A previous version of this article statement incorrectly that the pan-Orthodox council was set to begin June 16. It begins June 19.

James Dominic Rooney, O.P., is a priest and a doctoral student in philosophy at St. Louis University.

Show Comments (
1
)
Comments are automatically closed two weeks after an article's initial publication. See our comments policy for more.
alan macdonald
6 years ago
I pray that the two lungs of the Christian Church, Roman Catholic and Orthodox, will soon unite.