Trying to watch 'Making a Murderer' and still believe in God. 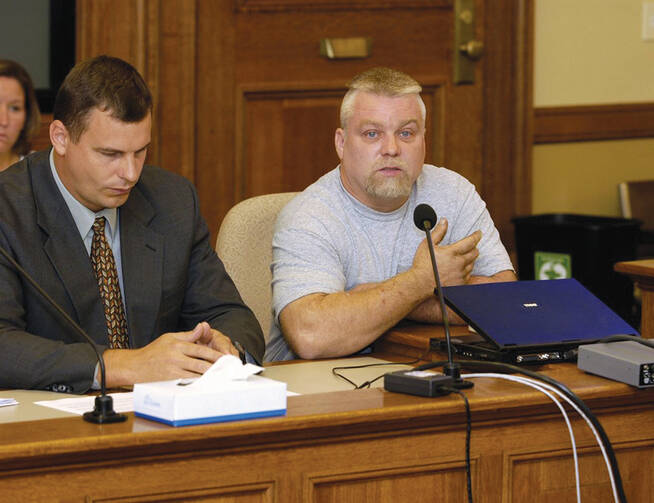 It is nearly impossible to watch Making a Murderer and believe in God at the same time. The viewing experience of this Netflix series perhaps was best summed up by Robert Browning nearly 200 years ago when he wrote, “And yet, God has not said a word.” If temporary atheism is too precise a descriptor of the affective wake the viewer is left to tread after viewing the series, then temporary agnosticism might do just as well. Agnosticism is the order of the day for this 10-part documentary.

“Making a Murderer”tells the story of Steven Avery, a Wisconsin man who served 18 years in prison for a crime for which he was wrongfully convicted. Then, two years after his release, he was arrested and charged with the murder of a 25-year-old photographer, Teresa Halbach. The series focuses primarily on the Halbach murder trial from Avery’s perspective and takes to task the justice system that wrongfully imprisoned Avery on one occasion and may be doing the very same thing once more.

There will be no spoilers here—though it is nearly impossible these days with the series’s incredible popularity to go anywhere online and not come upon one. Neither will there be any verdicts, as that work is left to the myriad sites and articles in the online universe that have parsed even the most minute of minutiae with regard to the series and Avery’s case.

What can be said is that “Murderer” is must-watch television, and not for the reasons people usually associate with the true crime genre. “Murderer” is not about voyeurism or about affirming the righteousness of its audience. Rather, at its core, “Murderer” is an uneasy meditation on those two fundamentals of the Christian tradition: justice and mercy. “Murderer”forces its audience to face (especially the audience of believers) the very messy ambiguity that is justice in the contemporary world.

The seriesupends our preconceived notions of who the good guys and bad guys are, while continually demanding that its audience throw away its certitude from one moment to the next, as new information is revealed throughout its 10 hour-long episodes. Indeed, it is because of its duration that “Murderer”(and its audience) are liberated from the constraints of quick cuts and pat summations that are typical of the true crime genre, and is able to allow its story to unfold with all its ups and downs and twists and turns.

The creative team behind “Murderer,” Laura Ricciardi and Moira Demos, do an excellent job providing a clear narrative arc, while at the same time ensuring that no stone is left unturned. They reach their viewers first through the heart—allowing the affective response of the viewer to stimulate an intellectual interrogation within. Our visceral responses to the trial of Steven Avery, which also happens to be the trial of the murder of Teresa Halbach, makes us uncomfortable as it raises in us an awareness of our innate biases and calls into question the reasons for emotional reactions.

The beauty of a well-done documentary is that it does not allow its audience off the hook. The viewer cannot detach from the story being told when it gets too uncomfortable, because the story being told is the story of real people and real people’s lives. That is what makes “Murderer” so compelling. The stakes are life and death, because it really is a matter of life or death. People’s lives are on the line; families are being torn apart; and most important, a young, vital woman is dead.

Though Ricciardi’s and Demos’s perspective is clearly slanted toward supporting Steven Avery, the very comprehensiveness of their project does not allow the story to be told in as succinct a manner as they perhaps would have hoped. Steven Avery is most certainly a victim in this story, but he is not the only one, and that cannot be forgotten. Although Teresa Halbach and her family are infrequently seen throughout the series, one cannot (and should not) forget them. In a murder trial there are no winners from the start. Regardless of outcomes and whatever is transpiring within the context of the trial—right or wrong, just or unjust—the victim cannot be erased.

While justice, however messily ambiguous it may be, is the focal point of “Murderer,” mercy, like Teresa Halbach herself, imposes a robust presence by its very absence. If justice is the only issue at stake, then we as an audience of believers are left with nothing but a handful of broken structures, systems and lives. We are left disillusioned and disheartened and in a state of despair, because seemingly nothing about the world we live in can be redeemed.

This temporary atheism (or agnosticism, take your pick) inevitably leads to questioning what is lacking, and that is where mercy comes into play. And this is not some sort of Pollyannish, wrap-it-all-up-in-a-bow panacea but rather a deeper investigation, both interiorly and in the larger context, into the necessary role mercy must play in both our daily lives and the greater world if we are going to understand our world as being created and sustained by a loving God. If God has not said a word, it is only because neither have we.

Show Comments (
1
)
Comments are automatically closed two weeks after an article's initial publication. See our comments policy for more.
Henry George
6 years 9 months ago
Jake, Jake, Jake, How can you be at Heythrop and be so un-informed ? It is hardly clear that Steven Avery is innocent - key facts/evidence are either left out or down played in the film. [His previous conviction was due to a rape victim positively identifying him as her rapist. ] Teresa Halbach is dead, someone killed her - as for her being young and vital - does that "modify" the sheer fact that she was murdered ? A new investigation/trial may be in order, but a more balanced review please. "As for Justice and Mercy and the Christian Tradition"...those are God's gifts to us, not human constructs.