Today’s Slaves: The church’s response to the human trafficking crisis 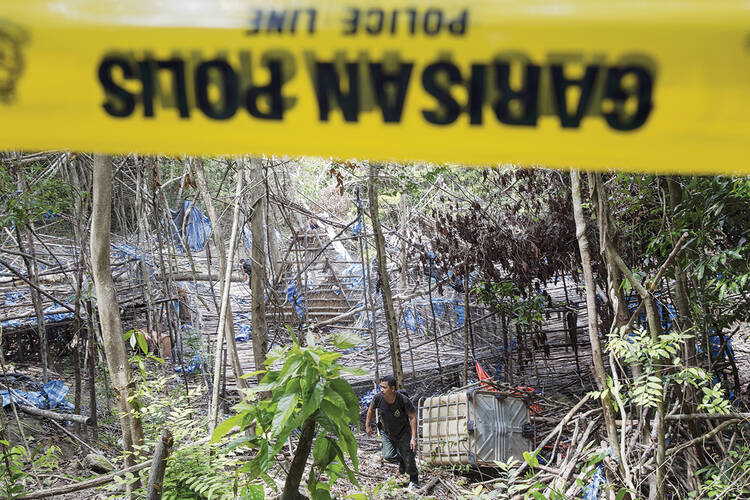 The Vatican’s gardens are lush. Palm trees create a canopy unique to that part of the world, marble buildings punctuate the landscape, often at unexpected turns, and it is not unusual to see members of the papal staff or cardinals scurrying about, either hurrying off to a meeting or pacing in deep reflection amid the quiet surroundings. Of the many buildings housed within the gardens, one can find the Pontifical Academy of Sciences, which, constructed in the 16th century as a papal retreat and serving today as an international center of academic pursuits, seems an unlikely place for this story to begin. Yet the Academy serves not only as a center for academic learning, but also as the home of the Global Freedom Network, established by Pope Francis just a year ago to solidify the ecumenical fight against modern-day slavery. The network also offers greater insight into the unique ways the pope is seeking to fight these destructive forces in the world today.

Human trafficking can happen anywhere. There is no sector of our economy, no faction of our world that is wholly untouched. According to the most recent report released in December 2014 by the United Nations Office of Drugs and Crime, trafficking has been identified in 124 countries and affects individuals of 152 nationalities. Over 510 different trafficking flows have been identified, showing the deeply intricate networks that cross the globe and making clear the need for a greater international response. The more detailed statistics are even more harrowing: 49 percent of victims are adult women; 33 percent are children (a 5 percent increase since the last U.N.O.D.C. report in 2012); 18 percent are men. The types of exploitation are also quite varied: 53 percent of victims are forced into sexual exploitation, 40 percent into forced labor (e.g. mining, logging, fishing, etc.), 7 percent into a variety of other exploitations (e.g. child soldiers), and 0.3 percent are the victims of organ harvesting. Ultimately, some estimates as to how many people are affected by trafficking run as high as 35 million.

What may be more worrying is the lack of a structured response by many different government organizations. In 2000, 166 members of the United Nations acted as parties to the “Protocol to Prevent, Suppress, and Punish Trafficking in Persons, especially of Women and Children,” which sought to bring the global community into line against human trafficking. Specifically, the protocol officially defined “human trafficking,” established the understanding that victims were not to be treated as criminals and sought to encourage legislation that would offer harsher penalties on traffickers. However, the U.N.O.D.C. report notes that while 90 percent of countries have legislation on the books that criminalizes human trafficking, many governments are reporting fewer than 10 trafficking convictions a year. Fifteen percent of countries included in the report did not report a single trafficking-related conviction between 2010 and 2012. This lack of convictions may be a result of gross ignorance, extreme complicity or an inability to prosecute. One of the primary challenges is one of the most obvious ones to fix: Traffickers will continue to traffic victims so long as they go unprosecuted, and to remedy this governments need to enforce their own laws more stringently.

The Economy of Trafficking

The economic yields from trafficking are enormous. The International Labor Organization estimates that it generates US$150 billion per year. The U.N.O.D.C. cites examples of this profitability. East Asian sex slaves in Australia could bring in between $55-60,000 annually per victim for the traffickers; in Canada, authorities estimated that a slave could bring traffickers $180,000 profit within the first eight months. Other estimates show that sex workers in the Philippines would, on average, bring in $10-20 per sexual service performed for their traffickers, and may perform upwards of 20 “services” a day.

But there is political will for change. The U.S. Department of State annually produces a “Trafficking in Persons Report” in accordance with a Congressional mandate. In this report, the State Department tracks the work and progress of each nation throughout the world and their ability to comply with antitrafficking legislation. Those that fall into the Tier III category are liable to have sanctions placed against them. Other nations also continue to advance in the fight against trafficking. The British House of Lords recently passed the Modern Slavery Bill, a seminal piece of legislation that is one of the most comprehensive actions taken by a modern government in the fight against human trafficking. The bill will create an antislavery commissioner within the British government, seek to better protect the victims of human trafficking and extend preventive measures against slavery.

According to the TIP Report, a number of other countries have made great strides against trafficking: Haiti has finally outlawed slavery, Chad has officially begun intervening to prevent children from being forced into militias, and Switzerland has closed a legal loophole that allowed for child prostitution. Progress is, undoubtedly but slowly, being made.

And then there is Pope Francis. It has often been noted that Francis has broken the mold. It is no hyperbole to say that he is probably the best politician (although he would likely cringe at the label) on the world scene today. He is both capable of standing his ground while launching multipronged attacks on multiple contentious issues and of actually managing to get positive results. Nothing better highlights the pope’s ability to do so than his work on human trafficking.

“It is not unique in itself,” said Archbishop Bernardito Auza, papal nuncio and permanent observer of the Holy See at the United Nations, when asked if an organization like the Global Freedom Network, with such a specific focus, had ever been established by a pope prior to Francis. The nuncio noted that there are a number of papal institutions specifically designated for individual causes, including H.I.V./AIDS and the rights of indigenous peoples. “However,” he continued, “it is unique in that it is not distinctly Catholic...having three major co-founders: that is, the Walk Free Foundation from Australia with Mr. [Andrew] Forrest; and then there are the archbishop of Canterbury and the president/rector of Al-Azhar, which is the prime Sunni institution in the world.”

The nuncio also noted the breadth of the effort to deal with human trafficking and what it really emphasizes for the pope, saying that “it directly touches the dignity of the human person, which is a significant point of emphasis for Pope Francis.” Then there is the pope’s concern for the poor and impoverished, who are disproportionally afflicted by human trafficking, often for materialistic gains. The victims “are the most vulnerable, not only as categories, like women, but also as economic groups,” said Archbishop Auza, adding: “It seems that there are so many people who are willing to sell other people or to facilitate the selling of other people, etc., because, the most basic theological, philosophical and moral reasons behind this are that the value of the human person is not considered. The person is seen merely as merchandise...as an immediate economic gain.” He also noted that a number of trafficking victims often sell themselves in hopes of better opportunities abroad, emphasizing that “the overall key to stopping trafficking is to try and stop the burgeoning and increasing economic gap between countries.” He added that it is necessary that “we as a church, and we as individuals” across all religions and nations address “not only the issue of human trafficking, but its underlying causes” as well.

The Global Freedom Network, under the influence of Pope Francis and the mandates agreed upon by the world’s major religious leaders, seeks to do just that: eliminate the underlying networks and endemic issues that lead to human trafficking. According to Bishop Marcelo Sánchez Sorondo, emeritus chair of the G.F.N. board, the first year was a success, with more to come. On Dec. 2, 2014, the G.F.N. was able to coordinate a joint event in which a number of religious leaders were able to come together and sign a “Joint Declaration of Religious Leaders Against Modern Slavery.” Bishop Sorondo described the G.F.N. as unique, “because this is perhaps the first time that religious leaders have come together, adding to their interreligious dialogue, to make a common statement that the other is like you...that you must love your neighbor as yourself.” When asked how engaging religious leaders translates into political action, Bishop Sorondo affirmed that “religions are the soul of culture and the religious leaders we invited are very active in their communities. We think that they can act as role models and have an influence on society and on political leaders.” But there is more than just good will behind the G.F.N. There is practicality. In order to achieve its goal of eliminating human trafficking by 2020, Bishop Sorondo outlines six necessary steps:

3. Care for the victims and survivors of forced labor, prostitution and organ trafficking. The G.F.N. will work with all religions to identify existing services and facilities to better support survivors;

4. Law reforms and enforcement. The G.F.N. will lobby for improved legislation, enforcement of laws and increased prosecution rates as well as the introduction of new and enhanced international legislation;

5. Education and awareness. The G.F.N. will promote enhanced campaigns to raise awareness that concentrate specifically on prevention, different forms of exploitation and at-risk and vulnerable cohorts and communities;

6. Funding. Given the vast sums generated by these modern crimes against humanity, the G.F.N. must secure sizeable funds in order to carry out its task. It will, therefore, seek resources from private donors and national and international organizations.

The Global Freedom Network is a vibrant community of dedicated professionals seeking to end human trafficking. In a note found after his death addressed to the Boy Scouts of the World, the founder of the scout movement, Lord Robert Baden-Powell, offered this simple yet powerful piece of advice: “Leave the world a little bit better than the way you found it.” In many ways, this is the second motto of Francis’ papacy. His methods for making the world a better place will be among his greatest hallmarks. Just within the issue of human trafficking, he is leading a fight that not only confronts a grave social sin but brings in religious, political and business leaders to help. He has engaged in interreligious dialogue, called for complete and total respect for the dignity of the human person, sought to eliminate poverty, insisted on respect for the rights of women and children and demanded an end to the corruption and complicity of governments around the world, all on a single issue. Pope Francis’ legacy will not necessarily be what he accomplished, but rather how he accomplished it and whom he engaged with along the way to make the world “a little bit better.”

Nicholas Sawicki is going into his senior year at Fordham University, Bronx, N.Y.