Debating the Debates: Will they have any effect on the fall election? 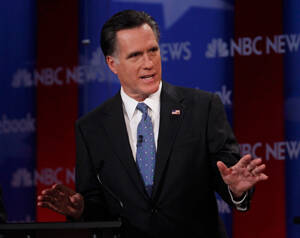 The conventional wisdom is that this year’s three presidential debates, the first of which airs on October 3, are Mitt Romney’s best chance at a “game changer” that erases President Barack Obama’s small but persistent lead in the polls. “Romney’s bid to become the next president could come down to a few hours onstage on Wednesday night,” writes Nancy Cook of the National Journal. “This whole race is going to turn upside down come Thursday morning,” New Jersey Gov. Chris Christie, a Romney supporter, told CBS News on Sunday, in remarks probably not cleared with the Romney campaign.

This kind of hype drives most political scientists crazy. They argue that there’s little evidence of presidential debates changing many voters’ minds, and the small number of undecided voters in this year’s campaign are unlikely to watch the debates anyway. In the current issue of the Washington Monthly, John Sides of George Washington University argues that “you can accurately predict where the race will stand after the debates by knowing the state of the race before the debates” and that the most praised debate performances—including John F. Kennedy in 1960 and Ronald Reagan in 1980—merely “nudged” the polls further in the direction they were already heading.

Still, the debates may have an effect even without causing sudden shifts in voter preference. Both major candidates promote debate-watching parties on their campaign Web sites, suggesting that they view the events as morale boosters for their supporters. A strong debate performance—and both sides will be able to find moments in the evening that constitute a “win”—can fire up the volunteers who actually work the phones and go door-to-door in search of persuadable voters. If strong supporters are energized by their candidate’s performance, they might send in contributions or go out to cast early votes. (In 19 states, including bellwether Ohio, any registered voter will already be able to make his or her choice by the morning after the debate, either in person or through a “no excuse needed” absentee ballot.) A strong performance may also lock in voters who were leaning toward one candidate but still had doubts; one theory is that Reagan’s confidence in debating Jimmy Carter in 1980 didn’t change minds as much as reassure voters who were already itching to vote for him.

If debates by themselves don’t change voter preferences, there’s still the matter of their affect on the “narrative” of the campaign. The Washington Post’s Chris Cilizza, a pretty good stand-in for the pundit class as a whole, has mostly come around to the John Sides way of thinking, but he still writes that “A mediocre or poor showing will reinforce the idea that Romney is a struggling candidate.” (Is that a threat or a promise?) In turn, this kind of verdict may determine the long-term reputation of its participants. It’s a matter of dispute whether the four Kennedy-Nixon debates were actually a significant factor in Richard Nixon’s defeat in 1960. But the oft-told story, not backed up by much evidence, of how Nixon’s sweaty brow and five o’clock shadow doomed his campaign might have had a more deleterious affect on his unsuccessful race for governor of California in 1962. It took the invention of the “New Nixon,” and a refusal to debate, to send him to the White House in 1968.

And even though Obama can’t run again and Romney’s not likely to if he loses this time, any “gaffes” in this year’s debate could be utilized against each man’s political party, perhaps beyond the current campaign. We’ve already seen statements by the candidates—the “you didn’t build that” syntax slip-up by Obama and the secretly recorded “47 percent” remarks by Romney—used in attacks against Democrats and Republicans. It would not be surprising if something Obama or Romney says on Wednesday ends up in campaign commercials for congressional candidates, as an attempt to link opponents to the less popular aspects of their parties.

This year’s debates—the first on domestic policy, the third on foreign policy and the middle one on anything that CNN’s Candy Crowley comes up with—will be unlike any of their predecessors in a couple of ways. For the first time since televised debates began in 1960, we have two candidates with Frost Belt sensibilities who seem more comfortable with ideas than with anecdotes. Neither has the folksiness of Southerners like Carter, Bill Clinton or George W. Bush, and neither has the straight-talk tenaciousness of Westerners like Reagan and John McCain. Both Obama and Romney are known as skillful debaters who nevertheless can get into trouble when they go off-script. (Recall Romney proposing a $10,000 bet to Rick Perry, and Obama’s awkward attempt at humor in telling Hillary Clinton, “You’re likeable enough” in a debate before the 2008 New Hampshire primary.)

James Fallows predicts in The Atlantic that the incumbent will try to show his command of policy, while the challenger may speak more broadly about the direction of the country: “Obama will be the one hoping that discussions get into details, Romney the one hoping they stay on generalities.” I’m not so sure that Powerpoint aficionado Romney will rely less on data points, but either approach might be preferable to any attempt by the candidates to come up with Reagan-like zingers (as when he said of Walter Mondale, “I will not make age an issue of this campaign. I am not going to exploit, for political purposes, my opponent’s youth and inexperience”).

Both Obama and Romney face new challenges in the age of fact-checkers. In the past, TV networks have paired debates with focus groups of “undecided” voters, with real-time graphs showing their positive or negative reactions to each word uttered on stage. But undecided voters now have a tarnished reputation, thanks to studies showing they tend to be “low-information” voters who might not even go to the polls. “Debates are staged mainly for people who fundamentally misunderstand how the system works,” tweets media critic Dan Kennedy.

This time, we’ll also be getting live-blogging and tweeting throughout each debate, mostly by partisans. If you have friends interested in politics, expect your Facebook feed to rapidly fill up with rebuttals of the candidates’ statements, sometimes within seconds. Then there are the professional fact-checkers, who have already honed their abilities on convention speeches this year. Within hours of the debate, we’ll see Web sites such as PolitiFact slap labels from “mostly true” to “pants on fire” on almost every piece of data put forward by the candidates.

The biggest unknown of the debate is how the candidates react to this unprecedented scrutiny. Do they plow ahead with dubious assertions that may draw cheers from their supporters (for example, arbitrarily picking a time period that puts the best or worst spin on job creation numbers), or do they attempt to win the morning-after coverage by racking up the fewest FALSE labels? October 3 may indeed be a game-changer if not for the results in November, then for the way candidates approach debates in the years to come.

Robert David Sullivan writes about politics and popular culture for the Boston Globe, the A.V. Club and other publications.

RobertDSullivan
Show Comments (
4
)
Comments are automatically closed two weeks after an article's initial publication. See our comments policy for more.
Eileen Ford
9 years 12 months ago
The best comment I've heard so far about the debates was by Kathleen Hall Jamieson of the Annenberg Foundation on a recent Bill Moyers show.
Her hope was that both Romney and Obama would be honest with the voters and tell them exactly what sacrifices we will need to make, regardless of who wins the election.
That truthfulness, she believes, will make the next president able to govern the country. Without it, neither man will be able to govern and the gridlock will continue as our country continues to go downhill.
We've had enough "spin" by both parties. It's time for truth.
Thomas Rooney OFS
9 years 12 months ago
Scripted stump speeches, delivered side by side. Unimpressive.
Mary Sweeney
9 years 12 months ago
"And even though Obama can’t run again and Romney’s not likely to if he loses this time,"...


Hmm,I wonder about the certitude and doubt ascribed above. Romney rates an "if", but for Obama there is an authoritative "he can't run again" - not nuanced or conditioned, but seemingly absolute. Acutally, if he should lose, he certainly could run again, though if it were me, I would say "I told you so. Not my problem."
Fred Horgan
9 years 12 months ago

Eileen, Thank you for that link to Ms Jameson ... just watched it and I agree.