Take These Gifts: Women should have more leadership roles in the church. 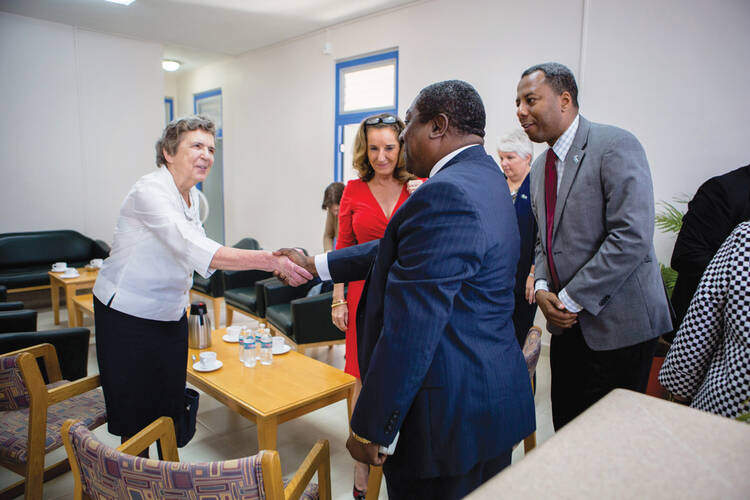 When it comes to women and men in U.S. society, there is no equality yet. But in the United States, the church is ahead of most Fortune 500 companies and even the White House. When you look at the numbers and take ordination—a doctrinal question—off the table, women do better in the church than in U.S. society overall.

Recent statistics show that women currently hold only 5 percent of Fortune 500 chief executive officer positions and only 4.9 percent of Fortune 1,000 C.E.O. positions. Salaries at the White House also show women trailing men. The Washington Post reported in July that “the average male White House employee currently earns about $88,600, while the average female White House employee earns about $78,400,” a gap of 13 percent. A reason, the Post suggested, is that “more men hold the higher-paying, senior jobs in the White House, and more women hold the lower-paying, junior jobs.”

The Post also reported that the “White House pay gap is similar to the disparity within the federal government,” but it is less than that for the United States as a whole, given that “the nation overall has a 23.5 percent gap.”

Women in the U.S. church are in top leadership positions but not in proportion to their numbers and usually not as the leaders in the larger organizations within the church. Among Catholic Healthcare Association members, for example, there are 54 Catholic hospital systems, with budgets of an estimated $110 billion. Only nine of these systems are headed by women (who oversee a combined budget of $9.4 billion).

Yet the situation improves for lower-ranking leadership positions in the C.H.A. Of the 664 individual Catholic hospitals in the United States, 28 percent are led by women. Women C.E.O.s/administrators head up 1,049 or 70 percent of the 1,606 long-term care or continuum care institutions. The numbers show advancement in leadership—but not enough. Much more can and should be done to ensure that women have meaningful leadership roles in the church today.

Promoting the Gifts of Women

Much of the talent of top-flight women is not being used. Women’s gifts, which include intuition and relational skills, are not taken advantage of in decision making.

Some years ago I met with a group of men to draft a statement about a property dispute. I suggested we show the church cared. “Huh?” everyone else said, “What’s caring got to do with it?” Eventually they inserted something about caring. They were nice men, but their goal was to win in a property dispute, and caring was not a concern. Victory was.

This inequality sends a message that women are less capable, insignificant and unworthy. This is no small problem, considering we are taught that all are made in God’s image and likeness and have inherent dignity. It seems reasonable to believe that God has given women gifts for the church, and insofar as we do not let these gifts shine we diminish the church and neglect the divine gifts.

Women bring different experiences to the table. If the church is to minister to all its people, it needs to feel or experience their needs in many ways. In the early days of the crisis caused by the sexual abuse of children by members of the clergy, a key problem was that leaders identified more with Father Jim than with little Jimmy. They knew Father and his family and played cards with him. Having had more women in positions of leadership, especially mothers, might have shifted the balance more toward little Jimmy, a vulnerable child or teen.

Women lean toward consensus and recognize nuances. Two decades ago, I was director of communications for World Youth Day in Denver. The pope was coming, and I sought advice from the late Tim Russert.

Tim knew most of the people I would deal with were men and offered a common male approach. “You own the pope, so you’re in charge!” It was an adult version of sandlot sports: whoever owns the ball decides what position he will play.

I adopted this so-called male mindset to make the event work. But my maternal side took over too. A 19-year-old with a fatal disease wanted to meet the pope. That became a priority, and I gave her a special place at Mass and made it happen. A male organizer objected, saying she should be with children to meet the pope later. I argued that a 19-year-old belonged with adults. I saw a nuance that my male colleague did not.

Statistics from U.S. hospitals suggest women make a difference. Catholic hospitals, where one out of six persons in the country receives medical care, reflect women’s historical influence through their services. Many hospitals were founded by religious orders of women, and many still operate under their sponsorship, if not their direct administration.

The success of Catholic schools where women have been empowered as leaders testifies to women’s gifts. For decades we have seen students in Catholic schools, generally led by women, succeed despite sociological obstacles like poverty and challenging family circumstances. One very recent example is U.S. Supreme Court Justice Sonia Sotomayor, who got her educational start at Blessed Sacrament School in the Bronx.

Women predominate in social services, but women lead only 65 out of 165 major Catholic Charities agencies. Still, these 65 women oversee services annually for more than 2.2 million people, with a budget of almost $655 million, and supervise almost 10,300 staff members. But how might we continue to improve the role of women in the church?

Open more leadership positions to women. Pope Francis speaks of shaking up his curia. There are offices there where women would be logical leaders, like the Congregation for Institutes of Consecrated Life and Societies of Apostolic Life. This congregation oversees most of the world’s estimated 722,000 women and 186,000 men in religious orders.

There ought to be a place for some of the growing number of women theologians at the Congregation for the Doctrine of the Faith. Pope Francis recently advised Cardinal Gerhard Müller, head of the C.D.F., that he wanted more women on the International Theological Commission, an advisory body to the C.D.F. on contemporary issues, where up until now there were but two women. Recently the number increased to five, and they now constitute 16 percent of the new commission’s membership. It is easy to argue that 50 percent of the commission members should be women—or even more, as a kind of affirmative action. The addition of women to C.D.F. professional staff also is long overdue.

Acknowledge what women already do. In virtually every U.S. parish, women read the Scriptures at Mass and distribute Communion. Perhaps it is time to welcome them officially into the ministries of lector and acolyte. Historically, lector and acolyte were referred to as orders and seen as steps toward ordination. Given the changed reality, could this be reconsidered? An increasing number of women also serve as parish-life coordinators and parish pastoral associates, positions that might be better acknowledged in the church through installation services.

Promote women in major archdioceses. Women can be promoted to positions like chancellor, director of Catholic Charities and superintendent of schools. Women already hold such positions in smaller dioceses, but not in many large ones. Put more women on seminary boards and other consultative groups. Make women’s positions meaningful. Promoting women to the position of chancellor is step one. Making the position more than that of official record-keeper would be step two. As the number of women educated in canon law increases, it may be time to name women as heads of diocesan tribunals.

Promote more women leaders in Catholic colleges and universities. The first president of the consolidated Jesuit-run University of Detroit and the Sisters of Mercy’s Mercy College, now the University of Detroit Mercy, was the Dominican sister Maureen Fay. The Jesuit-founded LeMoyne College in Syracuse, N.Y., caught higher education’s attention in 2014 when it named Linda LeMura as the first woman president of a Jesuit college or university. For over 100 years, sisters have successfully led colleges and universities established by their orders; their track record in educational leadership is well established.

Establish leadership academies within professional groups and ensure that half the participants are women. Study where women have not succeeded as top leaders. Did they lack resources or decisiveness or boldness of vision? If this is a trend, can remedies be suggested?

One barrier to promotion of women in the church may be that ordination has become equated with power, which is a theological distortion considering that ordination is for service. Pope Francis never suggests he will ordain women, but he has stated, “The feminine genius is needed whenever we make important decisions.”

Last January at a national conference in Italy, Pope Francis said he hoped the space for women to contribute incisively to the life of our church would continue to increase. Months later he appointed the first woman to head one of the seven pontifical universities in Rome when he named Mary Melone, a Franciscan sister, rector of the Pontifical University Antonianum, run by male Franciscans of the Order of Friars Minor.

Women bring unique gifts to any situation. Women in the Catholic Church have made powerful contributions, but they can make more. Women’s talents and the need for them are slowly finding recognition in the Catholic Church. That is progress. Fortune 500 companies and the White House need to catch up. And the church needs to boldly set an example too.