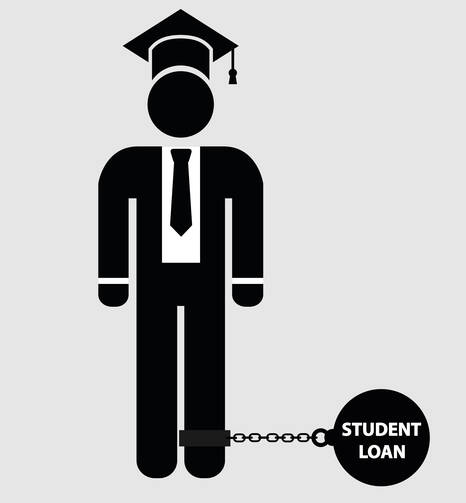 In 1965, President Lyndon B. Johnson signed the Higher Education Act. Part of Johnson’s Great Society agenda, the legislation was created as a way to lessen the economic divide between poor and rich American families by providing better financial support and resources for lower-income students seeking higher education. Fifty years later, however, with rising tuition costs and a rapid increase in student loan burdens discouraging working- and middle-class college aspirations, that divide threatens to become unbridgeable.

The current federal student loan debt is over $800 billion. As of 2012, the average loan balance for borrowers of all age groups is $24,301. The skyrocketing cost of tuition, which has risen far in excess of the rate of inflation, is a major contributor to the uptick in borrowing.

Research shows that upon graduation, many borrowers—who make up 60 percent of the graduating class nationwide—are struggling to make timely payments. Recent graduates, who often lack the lucrative job offers and competitive salaries obtained by their predecessors, have very few options if they cannot make their payments. Once the deferment period ends—usually six months after graduation—borrowers must begin making payments immediately. Many recent graduates can make only minimum payments while interest accrues; most outstanding student loans have interest rates of nearly 7 percent or higher. Unless a borrower meets specific requirements, like economic hardship or a high credit score rating, there is little to no consumer protection available. Unlike mortgage and car payments, student loans cannot be refinanced.

Millennials have been hit the hardest. Burdened by student debt, millennials are putting off large purchases, like houses and cars. An article in The Atlantic last October states that home ownership among millennials has reached a 19-year low. A recent study by the Pew Research Center also finds that Generation X-ers (now in their 30s and 40s) who have outstanding loans are likewise affected by the lingering weight of student debt. Those who took out college loans have less wealth than their parents had at the same age, which makes it more difficult for them to save for retirement, investments or their children.

What is being done to address the problem? In 2013, Congress passed the Bipartisan Student Loan Certainty Act, which allows students who took out loans in the 2013-14 school year to pay an interest rate of 3.86 percent on their loans. Senator Elizabeth Warren, Democrat of Masssachusetts, proposed the Bank on Students Emergency Loan Refinancing Act. Under this proposal, students would be given the opportunity to refinance their debt at current government-subsidized rates (less than 4 percent). Senator Warren added that these lowered rates “would be paid for via higher taxes on top earners.” Congress initially rejected Warren’s plan in 2014; the senator hopes to push it through this year.

Loan relief is a good first step, but better financial information should also be provided for students so they understand the implications of the agreements they are making as college freshmen. Universities and colleges with huge endowments could also consider following the Stanford University model; the university now offers free tuition for families making less than $125,000. While not all schools can afford to be so generous, it is incumbent on administrators everywhere to look for creative and prudent ways to contain the cost of a degree.

Catholic colleges also have a special responsibility to offer affordable education for low-income students. Patricia McGuire, president of Trinity Washington, explained in an interview with America that although her school’s endowment is only $14 million, Trinity is able to provide its students with $10 million worth of tuition discounts. She says that particular attention is given to so-called Dreamers, undocumented immigrants brought to the United States as children.

Many students opt out of attending college because they cannot afford tuition costs and fees; others do not see a four-year degree as a significant reason to overburden themselves with student loans. But the competitive global economy of the future will demand some level of post-secondary education, and study after study has documented the importance of a four-year degree to long-term wealth creation. Young people in the United States should not be hamstrung from the start of their working lives because they are trapped by unreasonable debt.

The decision to pursue higher education should pay dividends for all members of U.S. society, not merely the banks or the government. As Pope Francis urged on Palm Sunday in his message for World Youth Day, we must encourage our youth “to be revolutionaries” and “to go against the tide.” What better way than through education, preferably one they can afford?

The Editors
Show Comments (
6
)
Comments are automatically closed two weeks after an article's initial publication. See our comments policy for more.
David Haschka
7 years 7 months ago
I graduated from Marquette University 50 years ago in 1965. The full-time undergraduate tuition was $1500/year. Using an inflation calculator, that comes out to about $11,000 in 2015 buying power. I note that the current FTU tuition at Marquette is over $35,000 per year, an increase of 315% in terms of "fixed dollars." So where does all the money go? University education is a labor-intensive enterprise such that personnel costs make up the lion's share of the annual budget. But I would be very surprised to find that the average faculty member's buying power has increased by over three times during that same interval. In all likelihood it has stayed flat or even declined. So what does account for the huge increase in tuition costs? This is a question the universities must answer and justify.
ed gleason
7 years 7 months ago
On line instruction with a good feed back system .It will come soon..
Edward Ray
7 years 7 months ago
One has to look the value proposition attending any college, including Jesuit colleges. Many of these so-called Jesuit colleges/universities are really JINOs (Jesuits in name only) where one rarely comes across a Jesuit instructor and the "Jesuitness" of the university is difficult to find (i.e. Georgetown comes to mind). When universities have endowments in the billions of dollars, yet still charge high rates of tuition (Boston College was recently rated somewhere as the the 5th most expensive school in the US, get has an endowment north of $3B), one has to question the true purpose of these schools. Is it education or narcissistic greed? Too many six-figure salaried administrators contributing NOTHING to the educational experience. The trend is away from these overpriced universities and towards community colleges, distance learning and MOOCs (Massively Open Online Courses). Study after study may theoretically show greater success from obtaining a four year degree, but the last few years of graduates are apparently not included in these studies. Get rid of at least 50% of administrators, then use half the savings to cut tuition and the other half to hire/increase salaries of professors. I would say 100% of the administrators but you still need a janitorial staff and groundskeepers (who actually do provide value).
KEVIN HURLEY
7 years 7 months ago
Simplistic, Ed. (overly simplified, even though you do admit need) I will defend my Jesuit brethren, even though I attended a better school than any of them. (Notre Dame, CSC - Holy Cross Fathers) 1) High salaries are necessary. Period. Not all faculty are clergy; and if you want really good (lay) professors, you gotta pay. That's just economic truth. 2) Athletics (proverbial "pink elephant in the room" meaning no one wants to talk about the obvious) cost. 3) (Our Catholic god is triune, remember) There is a lot more to Universities' finances than even I know. I admit ignorance of the full scope of colleges' finances; but I am quite aware niversities' expenses are comprised of much more than salaries. And these expense must be paid. G'day. PS - Elizabeth Warren is brilliant, not political.
Chuck Kotlarz
7 years 7 months ago
At Harvard, over half of students come from families with an annual income greater than $150,000 and most Harvard college graduates leave school debt-free. The combined endowment of Harvard, Yale and Stanford exceeded the 2014 US Department of Education’s $67 billion appropriation. Generous donors perhaps believe major endowments leverage successful education. Has the legacy of Johnson’s Great Society Higher Education Act helped to lessen the economic divide between poor and rich American families? States heavily gerrymandered and aligned with Johnson’s Great Society principles have a 40% higher college attainment than states heavily gerrymandered and not aligned with Johnson’s Great Society principles. Unfortunately, states heavily gerrymandered and not aligned with Johnson’s Great Society principles also have a 40% higher incarceration rate. “Every time you stop a school, you will have to build a jail. What you gain at one end you lose at the other. It's like feeding a dog on his own tail. It won't fatten the dog.” Mark Twain
Anne Chapman
7 years 7 months ago
The rise in tuitions at a rate so much faster than the inflation rate has not been explained. The top universities with the largest endowments started working to ease the strain a bit for students whose family incomes are less than $120,000-125,000 - now charging no tuition for those students able to be admitted. Students from families that have less than ~$50,000/year income pay no tuition or room and board at some schools. Unfortunately, most colleges do not have the same endowments, yet charge almost as much as Harvard, Stanford and the rest. They cannot provide the same level of assistance. http://www.bloomberg.com/news/articles/2015-04-01/ten-elite-schools-where-middle-class-kids-don-t-pay-tuition