In the Steps of Romero: Thinking with the church in El Salvador 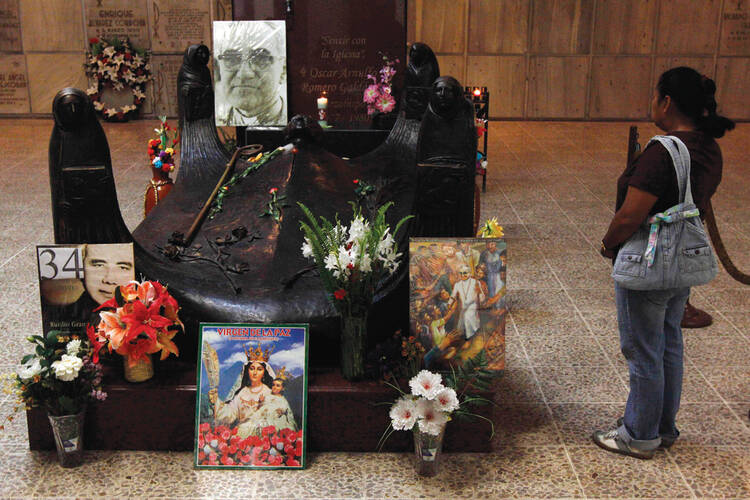 Sitting a few feet from the great bronze sculpture of the four evangelists lifting up the murdered archbishop, I read on the red marble slab over Archbishop Óscar Romero’s tomb the phrase Sentir con la Iglesia, generally translated as “To think with the church.”

The words have a deeply Ignatian resonance. Though not in the original text of the Spiritual Exercises, they were added as a subtitle to introduce St. Ignatius’ “Rules for Thinking With the Church,” and would have been familiar to Romero, who had frequently made the Exercises. While most English speakers understand the phrase to mean giving assent to official church teaching, for Romero the Spanish sentir would have lost none of its rich meaning of “to feel”; and “the church,” far from signifying just the hierarchy, would have primarily meant the suffering people of God for whom he was the bishop. He was the kind of bishop Pope Francis describes in his earthy language as “smelling of the sheep.” Images of this beloved shepherd are still common in San Salvador.

I was in the capital city recently with a group of 10 students participating in our university campus ministry’s Ignacio Companions program, an alternative spring break designed to give students a firsthand experience of how people in developing countries live today. El Salvador continues to struggle, but there has been progress since the peace accords were signed in 1992. The Farabundo Martí National Liberation Front, formerly a coalition of several left-wing guerilla groups, is now a political party. While we were there, it was campaigning openly against the National Republican Alliance, a right-wing political party founded by Roberto D’Aubuisson, widely considered to be responsible for the assassination of Archbishop Romero. The dreaded National Guard was reorganized into a national police force. There is more support for education and some minimal land reform, but many underlying problems have not been addressed.

On our first day we attended Mass in the crypt of the Cathedral of the Holy Savior, a wonderful liturgy full of passion and life. The priest challenged those assembled to become familiar with Pope Francis’ “The Joy of the Gospel” in preparation for the runoff election that was to take place the following Sunday. After the Mass, we gathered at Romero’s tomb with two other student groups from Jesuit institutions.

The next day we heard from two women from CoMadres, the Committee of Mothers of the Disappeared, a group formed in 1977 to search for their missing family members. One reviewed the history of government violence, including a horrific story of a demonstration at which hundreds were killed when the army opened fire on the marching students. Afterward, the authorities called in a road roller to flatten the bodies, some of them still alive, and hosed down the street with fire trucks. Another woman, Mercedes, had herself been imprisoned for over a year and a half, raped, kept naked in a cold cell for six months and repeatedly tortured. The students were stunned and deeply moved by her story.

That afternoon we visited the Fe y Alegría school in Chacra, a hardscrabble community in the hills above the city. The school was founded by Father Joaquín López y López, S.J., who was one of the six Jesuits murdered at the University of Central America in November 1989. It is part of a Jesuit-founded network of primary and secondary schools, now present in 13 countries throughout Latin America.

The contrast between the community of poor, cinderblock houses we passed through and the bright faces of the students—the boys in crisp white shirts and ties, the girls in navy sweaters and white blouses—could not have been more dramatic. The young people greeted us enthusiastically and played with our students during recess.

On Tuesday we journeyed to a tiny village called Agua Caliente in the northern countryside. Founded by 18 refugee families after the civil war in El Salvador ended in 1992, there are now some 80 families in the community. We met with members of their presiding council in the community center, an open, tin-roofed building with one wall decorated with pictures of Romero and two women active in the struggle as well as the names of over 200 family members who perished in the war.

Our students were welcomed by various families—chickens and skinny dogs wandering through their open houses—with whom they would share simple meals and spend the night. Though challenged by the lack of a common language, the outdoor privies and bucket showers, they spoke universally of the warmth of their hosts.

The next day we visited the nearby site of the massacre at Tenango and Guadalupe, where 200 villagers, mostly women and children who couldn’t escape a military envelopment, were killed in 1983. As students and villagers we gathered to pray for the dead around a concrete structure built like an oversized tomb.

On Thursday we returned to the city and visited the UCA, a beautiful tree-shaded campus where that night in 1989 soldiers of the U.S.-trained and equipped Atlacatl Battalion dragged Father López y López and five of his Jesuit companions from their beds and shot them in the garden behind their residence, then killed their housekeeper, Julia Elba Ramos, and her 16-year-old daughter, whom they found hiding in an adjacent parlor. As we prayed quietly in the rose garden, planted by the husband of Ms. Ramos, one of our students broke down in quiet tears. Afterward we celebrated the Eucharist in the Chapel of the Martyrs, a short distance from the Jesuit residence.

Friday was our last day. We visited El Rosario, a beautiful Dominican church adjacent to the national cathedral, a concrete arch structure lit with vibrant colors that stream though small squares of glass set into the walls on two sides—and the site of more victims of army violence. When a group of demonstrators, some wounded, sought refuge in the church in 1979, the military did not allow them to leave or get help. After three days without medical care, 21 people died and were buried under the floor, where they rest to this day. That afternoon we visited the Wall of Truth and Memory, inscribed with the names of some 30,000 civilian victims of the war, and later the hospital where Archbishop Romero was assassinated while celebrating the Eucharist.

Besides our quiet liturgy in the Chapel of the Martyrs, two experiences will long remain with me. One was our visit to two student communities, both inspired by Dean Brackley, S.J., one of five North American Jesuits who came as volunteers to the UCA only weeks after the murder of those six Jesuits, to continue their work. Indeed, it has continued. The first community, Romero House, offers scholarships that unite Salvadoran students who otherwise would have no opportunity for higher education. The second, Casa de la Solidaridad, is a program for students from Jesuit schools in the U.S. who come for a semester of academic study, spiritual encounters, community and direct involvement with the poor. Father Brackley, who died of cancer in 2011, once said to the students at the Casa, “I hope this experience has broken your hearts. I hope it’s allowed you to fall in love again. I hope it’s ruined you for life.”

As our time in El Salvador came to a close, I found myself moved not only by the memorials, sites and people we had visited along the way, but by how these encounters affected our students, and the leadership some of them showed. Several students led nightly reflections in which all participated; one stayed up late each night to select a Scripture passage for us to pray with the next day.

In their reflections, the students remarked on the passionate faith of the people they had met, their warmth, their pride in their country, the ways they welcomed us. Students also opened up about their own struggles with faith. One said faith was like riding a bicycle up a hill; you either make progress or go backwards. Another, who after a long search was preparing for baptism at Easter, said that he realized at the cathedral that Catholicism is a world church, celebrating the same Eucharist around the globe; he felt he was coming home.

Summing up the experience, one student said, “We’re just human. We belong to each other. We need to care for each other.” The words of former Father General Peter-Hans Kolvenbach, S.J., rang true: “When the heart is touched by direct experience, the mind may be challenged to change.”