The throwaway culture has a hold on both political parties. 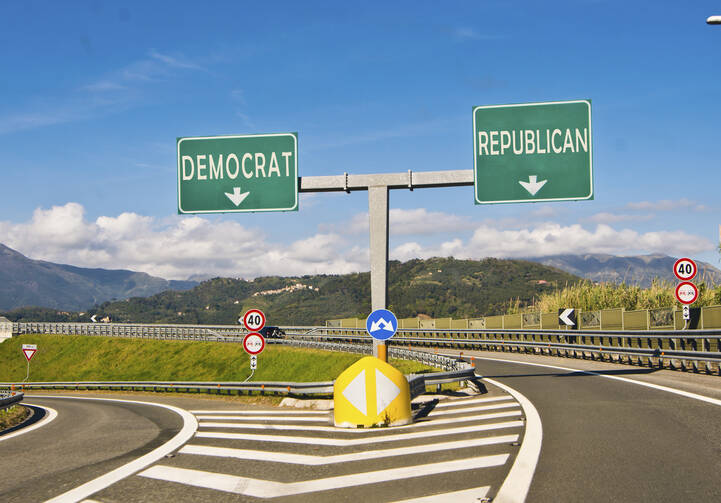 For “Consistent Ethic of Life Catholics,” these are good times ecclesiastically and bad times politically. Within our church, Pope Francis is making clear by word and deed that a consistent and comprehensive commitment to protect human life is morally right, theologically sound and pastorally powerful. With his haunting metaphor of a “throwaway culture,” Francis calls us to protect “innocent victims of abortion, children who die of hunger or from bombings, immigrants...the elderly or the sick who are considered a burden, the victims of terrorism, wars, violence and drug trafficking, the environment….”

In his historic address to Congress, Pope Francis brought some Republicans to their feet, insisting on “our responsibility to protect and defend human life at every stage of its development.” But many stopped clapping and some Democrats rose when he continued, “This conviction has led me…to advocate…for the global abolition of the death penalty…. Every life is sacred; every human person is endowed with an inalienable dignity.” This congressional confusion and polarization are signs of the difficult days for the consistent ethic of life in American politics. Its place seems to be threatened in both parties.

The Republican Party is about to nominate Donald J. Trump, who previously said he was very pro-choice and supported late-term abortions. He now claims to be pro-life, but his conversion seems incomplete, since he simultaneously called for jail time for women who have abortions and defended the work of Planned Parenthood and now has reversed himself on both. He also promises to defend marriage, but critics point out he has had three of them.

His support for torture, killing the families of suspected terrorists and greater use of the death penalty are not in question. He opposes limits on military force to protect innocent civilians. He talks glibly of using nuclear weapons and abandoning nonproliferation efforts. He demonizes immigrants and promises to deport millions who have fled violence and oppression. He has fanned the flames of racism and nativism. There is hardly an “intrinsic evil” listed in the U.S. bishops’ document “Forming Consciences for Faithful Citizenship” that he has not supported at one time or another.

A group of conservative Catholic leaders offered a damning case in the primaries: “Donald Trump is manifestly unfit to be president of the United States…. Nothing in his campaign or record gives confidence that he genuinely shares our commitments to the right to life, to religious freedom and the rights of conscience.”

The Democratic Party is about to nominate Hillary Clinton, who used to say abortion should be “safe, legal and rare, and by rare, I mean rare.” She no longer says abortions should be “rare” and apparently opposes any restrictions on them. When she became the presumptive nominee, she did not go to a union hall or shelter for homeless women but to a Planned Parenthood rally, where she declared, “There is no place I would rather be.”

At the federal level, the status quo has been that abortion is legal with some restrictions, but no one is forced to pay for other people’s abortions. Now Secretary Clinton makes a priority of repealing longstanding restrictions on federal funding of abortion, which would require pro-life Americans to pay for the destruction of unborn human life. Clinton’s continuing support for the death penalty in some cases and her vote for the Iraq war also trouble consistent-ethic voters.

The Democratic governor and legislature of California enacted “physician assisted suicide” and now insist, with the approval of the Obama administration, that Catholic institutions must provide and pay for abortion as part of health care coverage. About a third of Democratic voters call themselves pro-life, but pro-life candidates and officeholders rarely get support or have a future in the party. Who has a decisive voice in progressive politics? Planned Parenthood or the A.F.L-C.I.O.? Emily’s List or immigrant groups?

Being politically homeless does not mean that Catholics who support a consistent ethic of life can avoid hard choices or engage in simplistic moral equivalency on either issues or candidates in this election. Homelessness is not a virtue but a sign that we need to find new ways, allies and arguments to make a persuasive case for the protection of the life and dignity of all—in both parties and in a “throwaway culture.”

John Carr
Show Comments (
2
)
Comments are automatically closed two weeks after an article's initial publication. See our comments policy for more.
Charles Erlinger
6 years ago
Thanks for an excellent summary of the excruciating choices involved in civic participation, which itself is something of an unavoidable obligation. I once heard a nun who was on “home leave” to the states from her lifetime of service in East and Central Africa, recounting an informal meeting that took place in some refuge in Africa outside of one of the numerous danger zones. The meeting was almost a chance get-together of Catholic, and possibly other Christian missionaries who were all seeking temporary respite from the various genocides and civil wars that were then active. She said they were all in some stage of depression, mostly at a loss as to what they could do to make any difference to the people they had spent most of their adult lives trying to serve. The discussion, she recounted, had more or less ground to a halt when one of their number spoke up and said that what they had to do was the “next good thing.” She said the group members then more or less stopped talking about the “big picture” and an idea formed that what could be done is whatever specific act, however small, was the next thing that was right and true and feasible to do. I often think of that story and how that group of missionaries must have been so very well prepared to follow that course. They must certainly have been habitual practitioners of the moral virtues, especially Prudence, which is the lifetime schoolhouse for conscience formation, and must certainly have realized that their “good life” consisted in a “one after the other” series of concrete, specific acts which were the embodiment of God’s Will as far as they were concerned in each situation.
Bill Collier
5 years 12 months ago
John Carr has provided a cogent summary of the difficulties facing consistent ethic of life Catholics in this fall's national election. I'm a member of Democrats for Life of America, but I confess that it is becoming harder and harder to support the national ticket as many of the party leaders--both candidates and officials--race like lemmings off the cliff in their support for Planned Parenthood. DFLA has released a press release highlighting the (further) alienation that will likely occur in the party if it adopts a platform that supports the use of federal money for the funding of abortions: http://www.democratsforlife.org/index.php/articles-and-op-eds/press-releases An excerpt from the press release: The national party’s overwhelming support for NARAL (National Abortion Rights Action League) and Planned Parenthood causes serious conflicts for one-third of all Democratic voters, who feel increasingly uncomfortable with the focus on abortion rather than support for pregnant women. Day reiterates: “Democrats can win elections through all the down ballot races if we unite into a more inclusive and open political coalition. As it is, the national party platform is closed to all Democrats who believe that we must find better solutions to the challenges mothers face than aborting their children. Support for mothers must be a priority, not an afterthought.” This is a crucial election year in which the party has a choice to make. It either allows the abortion industry to control the party, or it can “OPEN THE BIG TENT” and welcome back the pro-life voters — millions who are critical to the agenda.