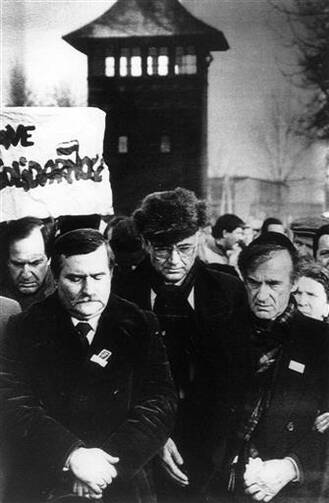 Among the more poignant tributes that have appeared since the death of Elie Wiesel on July 2, 2016, is Eva Fleischner’s open letter to him published in America in 1988 and now posted on its website. The Austrian-born Fleischner, a Holocaust scholar and pioneer of relations between Catholics and Jews, reflected on Mr. Wiesel’s relationship with the eminent French Catholic writer François Mauriac, who had written the preface to Night upon its publication in 1958 (English translation, 1960).

Rereading Ms. Fleischner’s letter brought to mind my own interpretation of that encounter. When the two men met in Paris in 1954, Elie Wiesel had already written a lengthy manuscript in Yiddish, Un di Velt Hot Geshvign (And the World Kept Silent); published in Argentina, it had attracted little notice. The interview with Mauriac led to what was eventually published as La Nuit (Night), the book Mr. Wiesel regarded as his “testimony,” his “deposition.”

In A Jew Today (1978), Elie Wiesel wrote about their initial meeting. Mauriac was “famous, old [70] and rich, covered with honors, comfortably ensconced in his Catholic faith,” whereas he was “young [27], poor, riddled with doubts, a solitary stateless person, unknown and Jewish.” Seeking to put his younger interviewer at ease, Mauriac spoke of his admiration for the Jewish people. He continued by speaking at length about Jesus, the Jew from Nazareth. Mr. Wiesel regarded it as an “impassioned, fascinating monologue on a single theme: the son of man and son of God, who, unable to save Israel, ended up saving mankind. Every reference led back to him.” Both riveted and angered, Elie Wiesel spoke in atypically harsh terms to Mauriac:

“Sir,” I said, “you speak of Christ, Christians love to speak of him. The passion of Christ, the agony of Christ, the death of Christ. In your religion, that is all you speak of. Well, I want you to know that ten years ago, not very far from here, I knew Jewish children every one of whom suffered a thousand times more, six million times more, than Christ on the cross. And we don’t speak about them.  Can you understand that sir? We don’t speak about them.”

Elie Wiesel then left abruptly, overwhelmed by his audaciousness before this revered figure. While waiting for the elevator, he felt a hand on his arm. It was Mauriac, asking him to return. So he did: “And suddenly the man I had just offended began to cry…wordlessly, never taking his eyes off me, he wept and wept.” Mauriac wanted no apologies; to the contrary, he wanted to know why Mr. Wiesel hadn’t written about his experiences in the Holocaust. Wiesel said, “I shall never forget that first meeting…. It was brought to a close by Mauriac’s escorting me to the door, to the elevator. There, after embracing me, he assumed a grave, almost solemn mien. ‘I think that you are wrong not to speak…. Listen to the old man that I am: one must speak out—one must also speak out.’”

Encouraged by Mauriac, Elie Wiesel revised and radically abbreviated his Yiddish work. He brought the French version to Mauriac, who helped him find a publisher and contributed the foreword, writing:

And I, who believe that God is love, what answer could I give my young questioner, whose dark eyes still held the reflection of that angelic sadness which had appeared one day upon the face of the hanged child? What did I say to him? Did I speak of that other Israeli, his brother, who may have resembled him—the Crucified, whose cross has conquered the world? Did I affirm that the stumbling block to his faith was the cornerstone of mine, and that the conformity between the Cross and the suffering of men was in my eyes key to that impenetrable mystery whereon the faith of his childhood had perished? Zion, however, has risen up again from the crematories and the charnel houses. The Jewish nation has been resurrected from among its thousands of dead. It is through them that it lives again. We do not know the worth of one single drop of blood, one single tear. All is grace. If the Eternal is the Eternal, the last word for each one of us belongs to Him. This is what I should have told this Jewish child. But I could only embrace him, weeping.

The two remained friends until Mauriac’s death in 1970. Mauriac even dedicated a book on Jesus to him: “To Elie Wiesel, who was a crucified Jewish child.”

Nevertheless, the conversation between François Mauriac and Elie Wiesel reveals profoundly different sensibilities about the cross of Jesus. And in those differing sensibilities lies the great theological divide between Jews and Christians: the cross as the cornerstone of faith for Christians and as a theological accusation against Jews as those responsible for the death of Jesus. As Naomi Seidman observes in Faithful Renderings: Jewish-Christian Difference and the Politics of Translation (2006), “Mauriac, in his Christological reframing of the Jewish Holocaust, never touches on the question of Jewish guilt for Christ’s crucifixion; but what vanishes in his reading of Jewish catastrophe is the other half of that story—the historical animosity of Christian against Jew.”

It is my conviction that Christians need to enter into the “other half of that story,” the catastrophic consequences for Jews of the accusations that they were responsible for Jesus’ death. Christians bear responsibility for singling Jews out as “Christ killers” and for centuries of anti-Jewish teaching that served as a precondition of Nazi ideology. Fifty years of new understandings of biblical texts and of revised church teachings now enable us to teach and preach about the crucifixion of Jesus in ways reflective of its historical and theological complexity.

Elie Wiesel believed that indifference lies at the heart of all evil. By doing justice to the “other half of the story,” we Christians honor our moral obligation to the Jewish people—and to Elie Wiesel’s profound legacy.

Mary C. Boys, S.N.J.M., is the dean of academic affairs and the Skinner and McAlpin Professor of Practical Theology at Union Theological Seminary in New York. This essay is adapted from her book Redeeming our Sacred Story: The Death of Jesus and Relations Between Jews and Christians (Paulist, 2013).

Show Comments (
1
)
Comments are automatically closed two weeks after an article's initial publication. See our comments policy for more.
Diana Jeff
5 years 10 months ago
Re: When Elie Wiesel met François Mauriac Thanks for this wonderful article over here. Thank you so much once again.