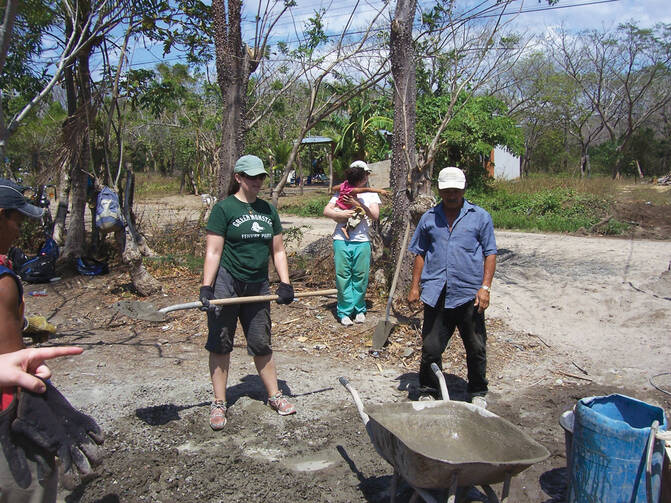 In March 2010, I traveled to Bagaces, Costa Rica, for a weeklong service project with a dozen college students and a colleague. Volunteer programs, service learning and weeklong service trips are now commonplace on American college campuses. These programs offer students powerful opportunities to engage the wider community through experiential learning. Our experience was organized through the Christian Foundation for Children and Aging (which has since been renamed Unbound), and we were tasked with building a house for a young immigrant family who were homeless and expecting their second child.

Each morning we left our motel around 8 a.m., walked down the street to a local café for breakfast, then headed down a mixture of paved and dirt roads to our building site. Working with some local craftsmen and the husband, we built a concrete house without machines or power tools. The intense physical labor was combined with short breaks to play catch with neighborhood children. 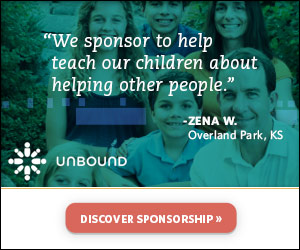 When the house was completed, it would be connected to the electric wires, but these would only be hooked up on our last day when professionals came to install the roof. While most of the people we encountered had their basic needs met, life was a struggle for many and there was little room for error. The town of Bagaces, in the province of Guanacaste, had widespread relative poverty, with few wealthy people and few facing extreme deprivation. Like many undergraduates, my students were focused on accomplishing their task. They did not want to take breaks and had to be forced to stop for lunch and dinner. This focus on helping and on the particular task is common in volunteer or other human rights work. However, the vision of Catholic social thought calls for a different type of engagement. Success requires more than merely completing the task; it also asks us to build solidarity through practicing human rights.

Each day at lunch, all of the women on the block helped cook and prepare the food C.F.C.A. provided for lunch. We were invited into their homes and extra tables were set up in the backyard. They welcomed us into their community with their hospitality. We were providing needed labor, but the community invited us to participate in what was their project, not ours. As a community, they had chosen the family and housing site. We were building community with them, not building a house for them. This participation was crucial—it was not enough to bring resources and accomplish our task.

Despite the language barrier, we were one community united in the project. Yet, this was the element with which many of my students genuinely struggled. Uncomfortable with taking time or resources from the poor, they often manifested a laser focus on the concrete building task and experienced discomfort at eating the papayas the village women bought for us off the fruit truck. Solidarity, however, requires genuine mutuality and reciprocity in the relationship. I can come in and help you, but if the relationship is not one of mutual participation, then it will not be one of solidarity.

Complete focus on the limited project of building a house provides insulation from the vulnerability, the questions and the challenge posed by the reality of relative poverty. For Catholic social thought, the elements that often make us, as Americans, anxious are absolutely crucial. Those lunches hosted by the women were a major element of what made solidarity possible. Engaging the vulnerability and poverty through solidarity in Bagaces forced us to be vulnerable and to ask difficult questions about poverty in our own communities. Solidarity with those in Bagaces was made possible only through the vulnerability experienced when we realized our humanity is bound up with theirs. That experience generated an opening that draws us into relationship with those in relative poverty back home. Engagement through those lunches pushed us beyond the moral problematic of seeing only what is lacking or of making sharp judgments about the people in poverty we encountered and people facing poverty in our own communities.

Commitment to human rights and solidarity is always grounded in the personal. Responding to human rights violations begins with the recognition of the other as an equal human being. As we respond, in the interplay of these experiences locally and globally, we begin to build solidarity. How do I engage a different context? How do I begin not with poverty but with personhood? As the philosopher Charles Taylor notes, “Our age makes higher demands of solidarity and benevolence on people today than ever before. Never before have people been asked to stretch so far and so consistently, so systematically, so as a matter of course, to the stranger outside the gates.” Building solidarity and practicing human rights requires seeing the people in front of me first. Only then can I move to the injustice of poverty. Solidarity and substantive human rights are realized through human encounter and not through the abstract. It is a challenge, however, to see persons, not poverty, as the necessary starting point.

During our trip, as we were walking home one night, a group of children from a different neighborhood swarmed us looking for stuff—footballs, Frisbees, stickers and so on. The situation was upsetting and problematic from every angle. Motivated by generosity, the students wanted to give the children what they asked for, and yet behind the generosity was a preoccupation with the perception of poverty. In the neighborhood in which we were working, it was different because there was a broader and deeper community relationship involved that created a context for generosity outside of simply the perception of poverty. This was not the case with random children from a different neighborhood following us down the street.

“Can I have that?” a small child asks one of our students as we are walking home, pointing first to her camera, then to her bracelet. It was clear that the mother had sent the children out “to the Americans.” And we all struggled with why, in my only assertion as a faculty member, I quickly moved us away from the group. Creating a relationship in which “Americans” come down and hand out stuff, without solidarity, sets up structures of dependency. Broader questions of neocolonialism, racial justice and social sin on a global scale all complicate the interactions we had with the children we met in Bagaces.

But this is not any different from questions of solidarity within our national and local contexts. As we walked away from the family of children following us, I was taken back to my own time as an undergraduate volunteering at St. Ann’s afterschool program in the South Bronx. Made famous by Jonathan Kozol’s book Amazing Grace, St. Ann’s provides homework help, food and a safe place to play. As I was helping an 8-year-old African-American girl with her math homework, I still remember her looking up at me and saying, “I know you all come down here to help us.” “You all,” did not mean college students; it meant white college students. This is why solidarity as a social virtue, participation and the structure of our relationships are so important. The relationship between a college student and the child she is tutoring, or between a teacher and members of a weekly religious education class, is not one of equals in power or role, but can be founded on the equality of persons. Thus, if the participants are vulnerable and fully human in the encounter, it can be one that builds solidarity.

My humanity is bound up in yours—this idea is fundamental for the vision of Catholic social thought. I cannot build a relationship of equal human dignity unless I begin from that starting point. If your pain cannot change me and my pain cannot change you, then the relationship cannot be one of solidarity, even if basic needs are being met. For solidarity it is not enough to recognize and fight injustice; vulnerability and participation grounded in the one human family must also be present. I must see your dignity bound up with mine. Without that vulnerability and participation, motivation for basic human rights becomes more and more difficult. This sad reality is powerfully demonstrated by the international response to the Rwandan genocide and hauntingly depicted the movie “Hotel Rwanda.” Upon news that coverage of the genocide will run on international news, the hotel manager, Paul Rusesabagina, thanks the reporter:

Paul: I am glad that you have shot this footage and that the world will see it. It is the only way we have a chance that people might intervene.

Jack: Yeah and if no one intervenes, is it still a good thing to show?

Paul: How can they not intervene when they witness such atrocities?

Jack: I think if people see this footage they’ll say, “Oh my God that’s horrible,” and then go on eating their dinners.

Unfortunately, the reporter was right. Seeing and knowing about an ongoing genocide was not sufficient to prompt immediate action. Even today it is not sufficient to motivate sustained focus to determine a proper course of action, as long-term humanitarian crises like Darfur have shown. The horror of injustice by itself has not proven sufficient motivation. Common humanity must be the starting point understood through radical interdependence. Catholic social thought offers an understanding of human persons in community in which human dignity is always both personal and universal. My dignity is bound up in yours, and mine is attacked where yours is attacked—this challenges hard distinctions between us and them.

The popular Christian music artist Sara Groves, inspired by a mission trip to Rwanda, wrote the powerful song “I Saw What I Saw.” We played this song during reflection in Costa Rica. Her poignant expression, about the deeply human encounter that cut to the core of how she understood the world, captures what it means for our humanity to be bound up together. She movingly portrays the vulnerability and solidarity in which “your pain has changed me,” and she recognizes that once one recognizes the humanity in the other, one has seen something that cannot be unseen. In this radical encounter where one sees the victims of injustice as brothers and sisters, solidarity is possible and substantive exercise of human rights attainable. The virtue of solidarity and the praxis of human rights require your pain to change me. Participation in the humanity of one another is necessary.

Meghan J. Clark is an assistant professor of moral theology at St. John’s University, Queens, N.Y. This article is excerpted from her book, The Vision of Catholic Social Thought: The Virtue of Solidarity and the Praxis of Human Rights (Fortress Press).