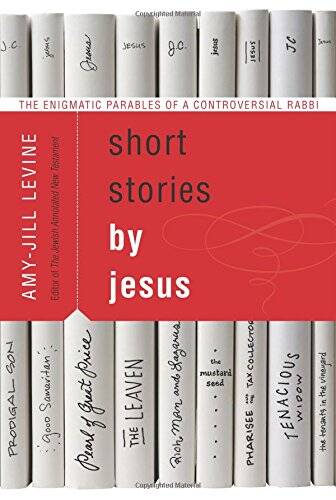 Beginning in December with Jim Martin’s book, Jesus: A Pilgrimage, the Catholic Book Club at America will read and discuss recently published books on the person of Jesus Christ. The Book Club will consider a wide spectrum of perspectives that speculate on the historical Jesus in light of Scripture. We will discuss the following books:

Short Stories by Jesus, Amy-Jill Levine (February)
Christ Actually: The Son of God for the Secular Age, James Carroll (March)
Killing Jesus: A History, Bill O’Reilly (April)
Simply Jesus: A New Vision of Who He Was, What He Did, and Why He Matters, N.T. Wright (May)
Jesus of Nazareth: What He Wanted, Who He Was, Gerhard Lohfink (June)
These books represent modern scholarship’s examination of the person of Jesus, the nature of Scripture, and modern academic research into the historical context of first century Palestine and the surrounding region. They are accessible, readable and—I hope—provocative portraits of the person whom Christians identify as the self-manifestation of the God. They will stir us to insight, contemplation and discussion of the person who is the heart of the Christian faith.

Prof. Levine’s book should do just that. She is a professor of New Testament and Jewish Studies at Vanderbilt University. In her book, Short Stories by Jesus, she considers several of Jesus’ parables and ponders how they would have sounded to Jesus’ original audience, first-century Galilean Jews. As I read Levine, an image continued to arise in my mind that illustrates the basic orientation of Levine’s work. Some years ago, the Gesu, the Society of Jesus’ mother church in Rome, underwent a renovation. In the process, one of the most sacred images of Mary and Jesus, which predates the Jesuit church, was restored. As artists began cleaning the image, they realized that the elaborate crown and jewels on Mary and Jesus were much later editions. The artists stripped away the added bling and a poignant, more ancient image of Madonna and child emerged. In a sense, this is exactly what Prof. Levine attempts to do with the Jesus’ parables. She strips away layers of meaning added to the stories by centuries of Christian interpreters in order to help modern readers contemplate Jesus’ parables as they might have been heard by the original audience.

Levine’s analysis carefully reveals layers of anti-Judaism that have accumulated through the long history of Christian consideration of these rich stories. First, Levine identifies parables as stories containing a surplus of meaning. They are meant not for decoding but for provoking thought about righteousness living. Ultimately, the meaning of each parable remains un-fixed and open to generations of readers. Second, parables are not allegories, that is, they need no element outside the parables themselves for the parable to be understood. This is an interesting claim. In interpreting Matthew 20:1-16, the Laborers in the Vineyard, Levine writes that many readers and preachers take up “the easy allegory that the landowner is God, and the parable becomes how we are to understand the divine. Once allegory enters, the real world is left behind, as well as any concern the parable—and Jesus, its teller—might have for issues of economics, employment, and the relationship between managers and employees” (199). Indeed, as Christians believe that Jesus is the manifestation of God, they are hungry to hear Jesus describe the Triune God to them. Perhaps this parable and others are more directed to human ethical relationships. In summarizing several parables, including the Laborers in the Vineyard, Levine writes:

The prodigal son benefits from the work of the elder brother; the sinful tax collector benefits from the righteousness of the Pharisee; in Christian tradition, sinful humanity benefits from the righteousness and sacrifice of Jesus. In this parable, the last hired benefit from the contract made with their coworkers; they benefit from an employer who is generous with his money. Thus not only do householder and laborer need each other, the work of some laborers benefits the lives of others. In the end, all have enough to eat, and the rich recognize their responsibility to the less well off, a responsibility that includes not simply giving a handout, but hiring workers who can thus preserve their dignity (219).

In this interpretation, Levine strips away the notion that the last to be hired for the vineyard are the Gentiles and those who bicker about laboring all day are Jews who have lived in covenant with God for centuries. Throughout her work, Levine identifies many careless anti-Jewish interpretations, such as the characterization of the priest in the parable of the Good Samaritan as concerned only for ritual purity and the characterization of Jews as the actual inventors of the prosperity gospel. In analyzing the parable of the Rich Man and Lazarus (Luke 16:19-31), Levine writes: “The subtext for today’s Christians is that Jews glorified wealth and worshipped Mammon, while Jesus invented the social conscience and liberation theology” (250). She also dismisses the notion that first-century Jews ignored outcasts and worshipped an unforgiving God.

Familiar with rabbinical texts, the works of Philo and modern historical scholarship—both Jewish and Christian—on the first century, Levine not only strips away some garish Christian overlay occluding Jesus’ parables, she enriches interpretation of them. She helps Christians to recall the beauty of the Old Testament, which represents, for Christians, an essential element of the definitive revelation of God. Levine makes us aware of “residual marcionism,” a heresy that dismisses the Old Testament as crude or unworthy of the God revealed through Jesus. Imagine what first-century Jews would think when they hear Jesus begin a parable: “A man had two sons…”? (Luke 15:11) What of Cain and Abel, Jacob and Esau? The Jewish Scriptures inform the Christian contemplation of the New Testament—in fact, they must.

And so, the Catholic Book Club considers the work of a Jewish New Testament scholar in order to continue our encounter with Jesus of Nazareth.

Please offer a response to the book or some of the questions below:

1. What do you think of Prof. Levine’s interpretation of the arch-parable, the story of the Prodigal Son? How does the parable change if one removes the primacy of repentance and forgiveness that constitute the heart of most Christian interpretations of the parable?

2. Have you become aware of anti-Judaism in Christian interpretation of scripture?

3. Do we spend enough time studying and praying with the Old Testament—that library of texts that formed a people and shaped Jesus’ own religious consciousness?

Show Comments (
4
)
Comments are automatically closed two weeks after an article's initial publication. See our comments policy for more.
Mary Pearlman
7 years 3 months ago
I suppose because I married a Jewish boy, (46 years ago) I almost always think of Jesus and his parents through a Jewish lens, and find myself turning to Hebrew scriptures to try and understand Christ and his followers a little better. Thank you for recommending this book - I just ordered it - it sounds wonderful! I'll begin re-reading Jesus of Nazareth again soon, and hope that many people will comment in June.
Steven Reynolds
7 years 3 months ago
Kevin - An excellent choice. I read it a few weeks back after reading Jim Martin's recommendation of Levine's work. Her The Misunderstood Jew (a book that I paired with it) is also recommended and provides more background to her theme of removing the anti-Jewish filter. The beauty of the parables is their flexibility and timelessness. Her interpretation of the Lost Son (following uniting of the lost sheep, lost coin, lost son parables in Lk 15) is creative and interesting. It worked in my view, but again I believe that there are many other valid interpretations, which is again the genius of Jesus' use of parables. I have understood the Christian theological connection to anti-semitism since my university theology studies 30 years ago, but Levine writings have further raised my awareness. I have increasing become convinced that we can benefit from a deeper appreciation of the OT and how it must have shaped Jesus's consciousness and how we read the Gospels today.
SUSAN GEMPERLINE MS
7 years 3 months ago
I am very glad that this book by Amy-Jill Levine was chosen. I read this book a month ago and placed it on my bibliography for a class that I taught on the Jewishness of Jesus. In preparing for that class I have come to understand how little Christians, and especially Catholics know about the context of Jesus' ministry in Second Temple Judaism or how few are even familiar with the Jewish Scriptures. Even if those in ministry have studied historical criticism they are often working with theological presuppositions based on allegorical Christian interpretations. When reading this book I realized just how prevalent are my own blind spots to anti-Jewish interpretations despite all my efforts to educate myself to the contrary. This book made me realize again, you never know what you never know.
ELIZABETH MALONE
7 years 2 months ago
One day some years ago as I read the story of the prodigal son, it dawned on me that the son did not seem all that repentant. Just as Ms. Levine points out, his confessional seems too pat and calculated to be genuine. He seems not so much sorry for the error of his ways as just cold and hungry. But, in my mind, the outstanding thing was that the father didn’t care whether the son repented or not. He was overjoyed that he was safely home and not the least interested in hearing anything about sin and repentance. Forgiveness? Not an issue. Like the many others Ms. Levine mentions, I forgot to consider the elder son at all. Irrelevant. But now I hear both his resentment and the father’s distress with sympathy. How will this father reconcile his love for both the dutiful son and the wastrel? Will the brothers ever be able to reconcile with one another? A dozen other questions come to mind. It seems that repentance and forgiveness are indeed called for but perhaps not exactly in the ways that would first come to mind.