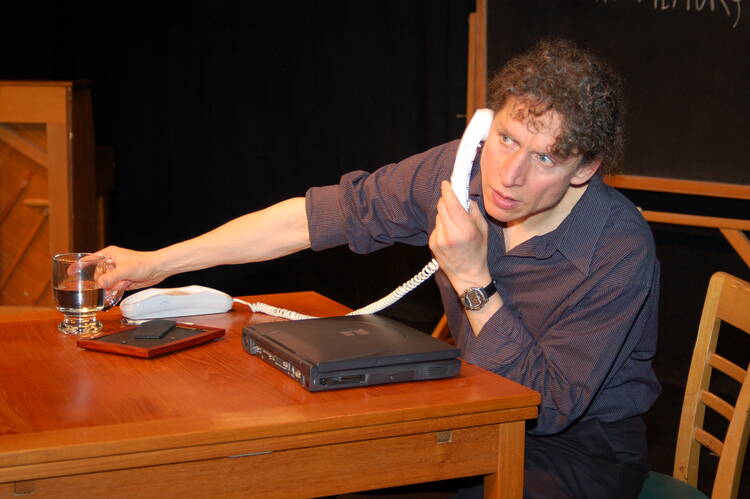 Ten years ago, poet, playwright and performer Michael Mack Googled the name of the priest who had sexually abused him decades earlier when he was an 11-years-old boy living in North Carolina. He found out his abuser was alive and living in Worcester, Mass., not too far from where Mack lived in Boston. After years of holding imaginary conversations with the priest who had molested him, Mack decided to seek him out to have a real one. What followed is the subject of “Conversations with My Molester: A Journey of Faith,” a play written and performed by Mack and directed by Daniel Gidron, which will open in New York City on Sept. 24, the day Pope Francis arrives there as part of his visit to the United States.

Three years ago when the play premiered at Mack’s parish church, the Church of St. Paul in Cambridge, Mass., and then was subsequently staged elsewhere in Boston and the Washington, D.C., area, the play won plaudits from The Boston Globe, The New York Times, The Washington Post, National Public Radio, CBS News and others. Its performance in New York this fall follows Mack presenting the play in New York City’s Midtown International Theatre Festival last year and winning the award for best script. His performance in it also won a nomination for best solo performance. These accolades, plus the scheduled visit to the United States of Pope Francis, led to the upcoming revival at New York’s Bridge Theatre, where it will run until Oct. 11. (For more information, see http://www.michaelmacklive.com)

“It seemed like a perfect way to align the intention behind the play with what I’ve come to perceive as Pope Francis’ intention, meaning he really seems to be a new face to the Catholic Church,” Mack said. “People have responded very positively and warmly to his remarkable presence. I think of the play also as being about reconciliation and renewal. That’s being reflected in Pope Francis’ papacy. It just seemed like a natural tie-in.”

The play depicts Mack’s efforts to learn more about his abuser and the surprising consequences this has. There are some unexpected twists in the story, which takes him full circle, back to Brevard, N.C., where the abuse took place in the 1960s. While the names of Mack’s abuser and a few other persons have been changed to preserve anonymity, the story Mack tells in “Conversations with My Molester” is true, including his return to the Catholic Church after many years away.

“There is nothing fictionalized,” he said. “Every sentence is true. There are things I don’t share just because it would become too bulky. It’s important that the play be a true and honest account of what happened.”

Mack is the sole performer in the play. That in itself seems challenging, but then so do many aspects of his life. “Conversations with My Molester” is the second one-man play he’s written. A first, “Hearing Voices, Speaking in Tongues,” deals with his mother’s schizophrenia. In the case of “Conversations,” Mack regards the play as being not only about his past but about his present, too.

“I had a profound experience of healing that is ongoing,” he said. “It’s not like I can just wash my hands and it’s done. Every time I do the play, I revisit the whole thing. I get to re-experience it as a different person, as an older person, hopefully as a more mature and wiser person.”

Now, with his abuser dead and the experience of trying to seek him out behind him, I asked Mack whether the relationship he had with the abusing priest, called Fr. Gordon in the play, continues in his head as it did for so many years before he sought him out.

“The answer is yes, but at the same time it’s sort of put to rest,” Mack said. “I’ve learned all that I can about him. The way I experience him now is through the stories I learn from others about their own perpetrator. I can’t hear a story about sexual abuse or sexual assault without getting stirred up. I don’t really believe in closure.”

The ongoing question, he said, is how to try and do something positive and effective.

Towards that end, on Saturday, Sept. 19, the Catholic lay group The Voice of the Faithful is partnering with Mack in a day-long restorative-justice healing circle at the theater before a preview performance of the play that evening.

“It’s a quiet, intimate gathering,” Mack said. “It’s a circle, a circle devoted to deep sharing and profound listening. What the play tries to do and what the healing circle does is to offer an avenue for healing and renewal.”

He anticipates that every performance of the play in New York City will be followed by a talkback with those in the audience who want to stay and discuss the play.

“Almost everyone stays because the people who come to the play are vested in the issue,” Mack said. “They have a reason for coming. They’re not coming for entertainment per se. Part of the healing process is not only sharing my story but giving other people an opportunity to share their story. The great gift to me is being able to hear from others and to learn we’re not alone in this.”

As a young boy, Mack wanted to be a priest. That ambition wasn’t fulfilled, but these days he is once again very much a Catholic, often going to daily Mass and drawing comfort from the sacraments. “I’ve studied a lot of different spiritual paths over the course of my life,” he said. “The one that for reasons I don’t understand I feel most, ironically, at home and most deeply connected to is the Catholic Church.” Indeed, Mack remarked that it’s not inconceivable he could yet become a priest.

As far as his hopes for the upcoming production of his play, he said he’s become a little more realistic about what the New York City run may bring than he was initially.

“I started with grand visions, which included Pope Francis coming to see a show,” he said. “Since then, my hope for the play has become much more down to earth. The center of my hope for the play now is that it will have meaning and value to the people who come to see it and the conversations that we have afterwards can help us all in our own healing journey.”