Searching for the invisible man with Ralph Ellison and Gordon Parks 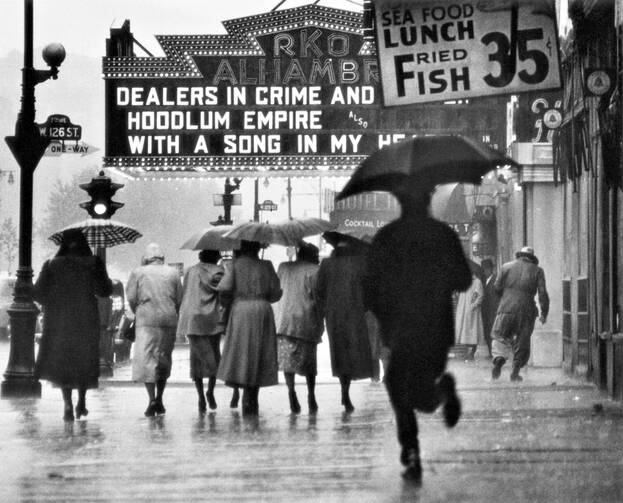 The story in The New York Times was clear and dramatic. In 1838, the Jesuits of Georgetown College in Washington sold 272 slaves to help cover the school’s dire financial situation. Other schools had held and sold slaves, it reported, but the Georgetown sale “stands out for its sheer size.” Other news outlets picked up the story, and on May 20 the Times ran a follow-up with stories from the descendants of those slaves. This was a powerful reminder that the slaveholding past of the United States still haunts us today.

The consequences of slavery are evident in the inequalities faced by many African-Americans today, including: higher rates of mass incarceration for African-American men; underserved, often segregated schools; and a lack of access to mental health resources. The drumbeat of reports of black teenagers being shot recurs with depressing regularity. These are other clear signs of perduring failure to move forward. Things may get better or quieter for a while, but any real improvement is hard to detect.

Another powerful reminder appeared this summer at the Art Institute of Chicago in its exhibition “Invisible Man: Gordon Parks and Ralph Ellison in Harlem,” which runs until August 28. Ellison, the writer, grew up in Oklahoma, attended the Tuskegee Institute and moved to Harlem in 1936. Parks, the photographer, was from Kansas but lived in St. Paul, Chicago and Washington before he arrived in Harlem in 1943; he soon became a photographer for Life. The two became close friends and professional colleagues. Together they walked the streets of Harlem, observed the neighborhood through changing seasons and recorded what they saw.

Parks and Ellison’s first big collaborative work was an article for ’48: The Magazine of the Year entitled “Harlem Is Nowhere.” The piece explored the idea of anonymity, how the tens of thousands who walked Harlem’s streets appeared nameless and faceless to most of those who passed by; and how Harlem as a whole made little impact on the world outside. It highlighted the work of the Lafargue Mental Hygiene Clinic, a mental health facility founded by psychiatrist Fredric Wertham that flourished briefly in Harlem and uniquely served a mixed-race clientele. Ellison wrote a script for the images Parks would provide as well as the text of the article and captions for the photos.

Ellison was already working on his novel Invisible Man, published in 1952; a section of the novel had been published in 1947 in a magazine. And as the beautiful book that accompanies the exhibition notes, the two works share many “themes and stylistic undertones…relying on vivid, surreal descriptions intended to make tangible the psychological, unconscious effects of racial inequality.”

The article that Ellison and Parks put together as “Harlem is Nowhere” did not see publication. Unfortunately, ’48: The Magazine of the Year went bankrupt a few weeks before the scheduled publication date. The author and the photographer were unable to place the article elsewhere, and the project died. Ralph Ellison kept his text and notes and eventually published the text in a collection of his essays, Shadow and Act, in 1964. Gordon Parks’s photographs simply became part of his archived work.

The two collaborated on one more work, “A Man Becomes Invisible,” which appeared in Life in 1952. That was, of course, the year Invisible Man appeared and won instant acclaim. In the article, Parks sought to illustrate important scenes from the novel.

The exhibition at the Art Institute of Chicago brings the text and the photographs for “Harlem Is Nowhere” together for the first time since 1948. Scholars Michal Raz-Russo, a photography curator at the Art Institute, and Jean-Christophe Cloutier of the University of Pennsylvania, who studies archival material on 20th-century American authors, were able, with other scholars, to piece together lost details of the collaborative project. Crucial for figuring out which of the many images in photo prints and on contact sheets in the Gordon Parks Foundation’s archives were intended for “Harlem is Nowhere” were the captions that Ellison had written. These are clearly displayed at the Art Institute, where the visitor can see what was intended for use, what was passed over in the photographer’s selection, what Ellison had written for the project and his notes for it. It also displays the many images that were taken for the publication “A Man Becomes Invisible.” The hard work of genius is on clear display.

There is powerful irony in the theme of the invisible man. The writer is invisible yet still present in the words he joins together and inks onto a page so others can be seen or imagined. So, too, the photographer, invisible behind his camera, lets others be seen in black and white images fixed by chemicals on paper. The exhibition allows visitors to see what they otherwise might well miss, to see the humanity in the nameless persons they go by, to see what they walk past every day without noticing. It can also perhaps help us to see what needs to be done today, what the possibilities are and where we can help. Perhaps we will recognize, as the title of the last essay in the exhibition’s beautiful book notes, the Harlem of Ralph Ellison and Gordon Parks, the Harlem of so many invisible men and women, that “Harlem Is Now Here.”