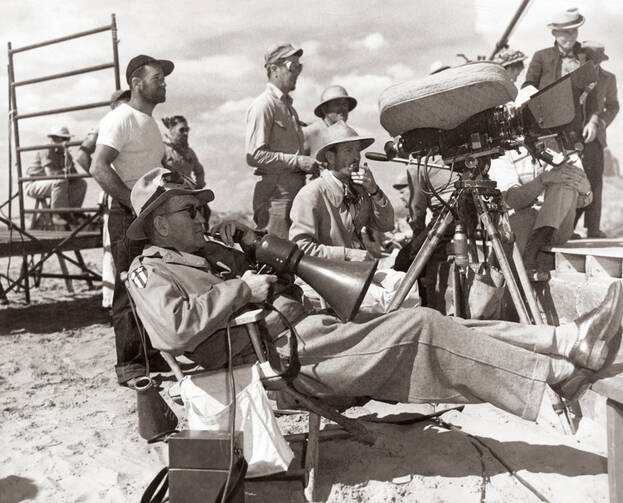 A fella ain’t got a soul of his own, just a little piece of a big soul, the one big soul that belongs to everybody.”

His movies are filled with compelling images and characters: a prostitute and an outlaw who ride off into the sunset; a self-absorbed commander who gets all of his men killed; an obsessive, tortured loner who sets out on an epic quest; a hero who isn’t all he appears to be.

He was a director whom Orson Welles labeled “Hollywood’s Old Master.” Clint Eastwood and Martin Scorsese agree that no serious film student can afford to ignore him. From “Who’s That Knocking at My Door” to “The Departed,” Scorsese has alluded to him on screen. The director Walter Hill called him a “Catholic poet.” The man, of course, is John Ford.

Do any of the scenes described above seem Catholic? Some religion and film scholars think so. Professor Anthony B. Smith at the University of Dayton, who has closely studied Ford’s films, suggests that while most of them do not deal with overtly Catholic subjects, there is a Catholic approach. In his study of Catholic filmmakers, Richard A. Blake, S.J., who has reviewed many films for America, argues that the “core of Catholic belief” imprinted what he calls an “afterimage” on Ford’s films, giving them “a characteristically Catholic view of the world.” Ford’s emphasis on the community rather than the individual gives his films a distinctly Catholic feel.

Ford once told Peter Bogdanovich that while he was Catholic, he wasn’t “very Catholic,” meaning he wasn’t a regular churchgoer. The Ford scholar Tag Gallagher, however, contends that his work was very Catholic in that he did not see life as “senseless wandering, but [a] pilgrimage leading to some sort of decreed epiphany, and in its course the characters find redemption.” Ford was no nihilist. The English director Lindsay Anderson called him a “poet of faith in an age of unbelief.”

How did this poet come to be? He was born John Martin Feeney in 1894, the 10th child of Irish immigrants in Portland, Me. He loved books, a fact he tried to hide in a macho, working-class world. He also had an eye for pictures and a penchant for storytelling, entertaining friends and family with stories and drawings. But he preferred to be known as Bull Feeney for his prowess on the football field.

His brother Frank had become a successful film actor as Francis Ford. After graduating from high school, Jack went West to begin an apprenticeship behind the camera. By 1917, he was directing Westerns as Jack Ford. Audiences liked his blend of action and humor, and critics liked his eye for detail.

A Poet in a Fedora

It was in sound that John Ford made his mark, while his brother was relegated to character roles. A fedora pulled over sunglasses (worn, Maureen O’Hara suggested, to hide kind eyes), chewing on a pipe and a handkerchief, a necktie worn in lieu of a belt and a keychain carrying an array of charms and religious emblems, he directed classic after classic. His work was his life. Everything else, family included, was secondary.

His actors, known as the “John Ford Stock Company,” became his real family: John Wayne, Ward Bond, Victor McLaglen and others. If Ford’s home life was limited, he had a genius for creating community onscreen. After seeing the same actors in different movies, one gets the feeling of revisiting old friends. In Ford, plot is less important than people. One does not watch so much as look: at the landscape, sky, faces. While he has been likened to the Western artist Frederic Remington, Ford also merits comparison with Charles Dickens; like Dickens, Ford creates a world full of interesting characters.

In 1939 Ford revived the mainstream western with “Stagecoach.” The story of strangers thrown together in the middle of an Indian war, the film put society’s “outsiders” (an alcoholic doctor, a prostitute and an outlaw) at its center. The sinners practice Christian virtues, in contrast to the “respectable” members of society. Anthony Smith writes: “The real journey in Stagecoach is…less geographical than moral, one from intolerance and prejudice toward acceptance and forgiveness. It is a film about the triumph of the generosity of spirit over selfishness and isolation, and creatively maps a Catholic moral landscape onto the mythic American West.”

In 1940 and 1941 Ford won consecutive Best Director Oscars for “The Grapes of Wrath” and “How Green Was My Valley,” the only director so honored. His story of displaced Oklahoma farmers has been called “one of the most powerful political-sociological documents in the history of the cinema.” At its end Tom Joad (Henry Fonda) talks of “one big soul,” a phrase reminiscent of the Catholic belief in Christ’s mystical body. The second film, a tale of Welsh miners, celebrates an idyllic community destroyed by industrialism and ends with an invocation of the dead, a veritable communion of saints.

War interrupted Ford’s career. As an officer in the Naval Reserve, he served with a field photographic unit, making photo surveys and filming combat. His documentary “The Battle of Midway” won an Oscar, but his D-Day footage is lost. His military service was his greatest pride. Back home he filmed consecutive classic westerns: “My Darling Clementine” (1946), “Fort Apache” (1948) and “She Wore a Yellow Ribbon” (1949).

In 1947 Ford directed his most overtly religious film, “The Fugitive,” based on Graham Greene’s The Power and the Glory<$f$>. It was among his least successful, critically and commercially. The story of a priest on the run from an anticlerical regime, it is a bit heavy-handed in its treatment of religious imagery. Ford’s values, it seems, emerged more effectively when less blatantly presented. “Fort Apache,” for example, celebrates community, the military family, with a highly ritualized dance scene at its center. Community rituals, particularly dances, are at the center of other movies, especially “My Darling Clementine” (1946) and “Wagonmaster” (1950).

The commander at Fort Apache, (Henry Fonda) is a loner whose recklessness leads to a massacre. At the conclusion, the new commander (John Wayne) eulogizes the troops in what almost amounts to a litany of the saints: “They aren’t forgotten because they haven’t died. They’re out there living—Collingwood and the rest. And they’ll keep on living as long as the regiment lives…. The faces may change…the names…but they’re there; the regiment, the regular army, now and 50 years from now.”

In 1956 Ford presented his masterpiece. “The Searchers” is the story of the quest for a captured girl. It received positive if minimal critical acclaim at the time, but greater praise from later directors like Steven Spielberg, George Lucas and Scorsese. John Wayne’s character, Ethan Edwards, is the archetype of the rugged individual, a central figure in American literature. He “goes it alone.” But for Ford he is a tragic figure, and his story is the tragedy of a loner. In “The Searchers,” the community is the norm, and the loner is the anomaly, even a figure as tough as Ethan.

By the 1960’s, age was catching up. On the set of “Cheyenne Autumn” (1964), his last Western, Ford said the fun was gone. The 1966 release of “Seven Women” marked the end of a half-century career. Critics said the times had passed Ford by. Plagued by ill health, he planned a comeback, but mainly stayed in bed reading books and smoking cigars. In 1973, at the age of 79, he died of stomach cancer.

Ford’s work has its flaws. He sometimes overdoes the sentimental, especially in later films like “Two Rode Together” (1961) and “Donovan’s Reef” (1963). Some critics, notably Richard Schickel, consider him incapable of portraying mature male-female relationships. Yet his movies are still watched today. The director William Friedkin says, “When we have colonized the moon, people will still be watching and loving John Ford’s films.”

If film is not mere entertainment, and directors are more than technicians, then Ford’s films qualify as art. If being Catholic means more than observance of rules, but a way of viewing the world and humanity, then Ford qualifies as a Catholic. If Catholic art stresses communion, God’s activity in the world and life’s deeper meanings, then John Ford qualifies as a Catholic artist of the highest kind.

Watch clips from the films of John Ford.

Patrick J. McNamara is an adjunct professor of church history at St. Joseph’s Seminary, Yonkers, N.Y. He writes a weekly column on American Catholic history for the Web site Patheos.