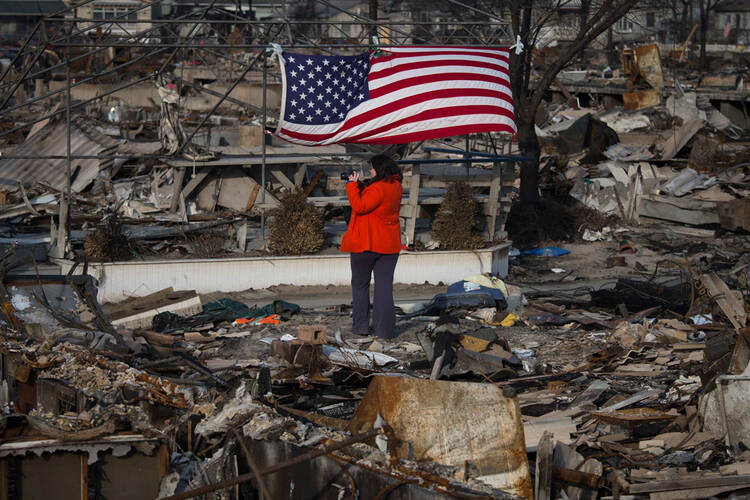 Hurricanes do not discriminate; they simply engulf everything in their path. Sandy swallowed up my home in the West End of Long Beach, where a few feet of sand covered the streets, as if the ocean decided to reclaim its territory. As the tides receded, Sandy took with it many of our illusions and exposed our profound need for each other. Like so many displaced or devastated by Sandy, I am struggling to process, react and plan what comes next. As an ethicist, I cannot help but ask more questions about tragedy, suffering, and injustice.

I am displaced, but I have family with whom to stay. I am not at the mercy of temporary housing or shelters. I am displaced, but I have stable employment where I am not worried about lost wages from the storm. I am displaced, but I was not abandoned or forgotten. And here we begin to see the crucial ethical distinctions in the aftermath of Super Storm Sandy. We are all victims of a profound tragedy; we are not all victims of injustice. The capacity to suffer is universal, but not all suffering is equivalent. The overwhelming devastation and pain of natural disasters can lead to glossing over the distinction between tragedy and injustice.

While Sandy did not adjust its path based upon wealth and class, the long-term effects of Sandy greatly depend upon wealth, class, power and poverty. The New York Stock Exchange was flooded and damaged, but it was not invisible. The anguish and anger palpable in the reactions of Staten Island residents crying out for help in the days after Sandy were not primarily cries of tragic pain, they were cries of injustice. The outcry came at the perceived invisibility of those most vulnerable in the storm’s wake.

We continue to hear those cries of injustice in places like Rockaway and Red Hook, recently profiled in “A Rising Clamor for Compassion” by the New York Times. One resident’s statement jumps out at you: “They are neglecting us as human beings,” Ada Soto remarked. The poverty and precarious situation at Red Hook, while it was exacerbated by the storm damage was not created by it. Those at or below the poverty line are least able to handle the unexpected tragedy of a natural disaster.

Ms. Soto’s situation is a combination of tragedy and injustice, mine is not. I am a victim of a tragedy; I am not a victim of injustice. This distinction is critical. It is the distinction that theologian Gustavo Gutierrez reiterates when he famously insisted, “I am not poor because I am not insignificant,” to those in power.

Structural inequality and injustice within our society determines who will be able to weather the storm. Sandy’s devastation made the situation of the poor more dire and pushed the poverty and misery detailed onto the front page, but it did not create it. And that structural poverty will cry out for justice, cry out for our attention long after the debris is cleared.

This reality is even clearer when one broadens the lens to include those outside of the United States who were in Sandy’s path to Haiti and Cuba. Where hurricanes and earthquakes do not discriminate, human beings often do. Our decision too often determine who will be decimated by a tragedy and who will be able to recover. Christians look to the Scripture where we are inundated with a clear message—the victims of injustice cry out to God and God hears their cries. In that hearing, a mirror and a judgment turns back on those who participate, even through complicity, in their marginalization.

One of the universalizing aspects of a tragedy is that it breaks down barriers to mercy. The outpouring of compassion and generosity has been inspiring. In our interdependence, we find strength. Neighbors band together, mobilizing technology to get information and goods to those in need. People from across the country came to help clear through debris and repair power lines. The risk of entering into someone else’s chaos seems smaller in comparison to widespread pain and suffering.

We have the possibility of a transformative moment, to build relationships and networks that begin with our common experience of tragedy and pushes deeper to the hard questions confronting injustice. In fighting back against the injustices of the poor still without power and heat today, will we continue in solidarity to fight for safer, more stable housing after the heat is fixed? Can we take that and turn our solidarity in tragedy into solidarity against injustice?

Meghan J. Clark is an assistant professor of moral theology at St. John’s University and a displaced resident of Long Beach, N.Y.