A saint of mercy: the story of Leopold Mandić 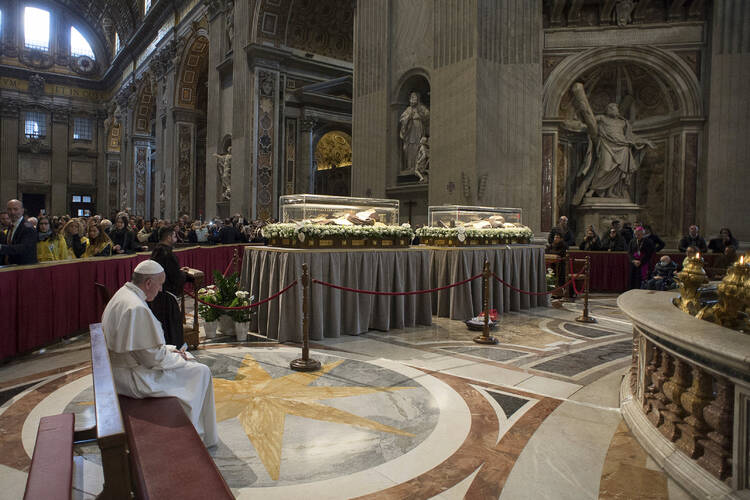 Two saints, both Capuchins known for spending long hours in the confessional, are the objects of special veneration during this Jubilee Year of Mercy. The first is widely known: Padre Pio of Pietrelcina (1887-1968), who lived and ministered in the south of Italy at San Giovanni Rotondo. The second is lesser known, but worth reflecting upon: Leopold Mandić, also known as Padre Leopold of Castelnuovo (1866-1942). In February the bodies of both men were brought to St. Peter’s Basilica at the request of Pope Francis. In Padre Leopold Pope Francis has found an example of someone whose life was committed to mercy and whose ministry in the confessional was directed toward the larger healing of the church.

Born in modern-day Montenegro, Leopold witnessed firsthand the deep tensions between the Latin Catholic and Orthodox churches in the region. This awareness led him to devote his whole life to the ministry of dialogue. Although his dream was to work directly to bring about the reconciliation of the churches his health kept him from being a missionary of reunion. Instead he heard confessions, always keeping in mind the larger reconciliation of the churches of his native land and his adopted home. He lived by the great saying of Jesus in John’s Gospel, “that all may be one.”

Leopold spent most of his adult life as a Capuchin housed in a tiny room between the friary and the church of the Holy Cross in Padua. Isolated from daylight or fresh air, his room was bitterly cold in winter and stifling hot in summer. Except for a battered armchair in one corner, a crucifix on the chipped plaster wall and an image of the Blessed Virgin Mary, the only other thing in Leopold’s room was a large prie-dieu, aged from overuse. Here for almost 40 years, for eight to 16 hours a day, the bent, bearded little priest heard the confessions of tens of thousands of souls. These included professors and students, politicians and peasants, religious and priests. One of these was Albino Luciani, the future Pope John Paul I.

Years later, Luciani gave a talk entitled “Leopold Mandić and God’s Mercy.” He recalled that, while he was a young priest on a retreat in Belluno, he heard that Father Leopold—who by then was widely known as a merciful confessor—would be hearing confessions. According to Luciani, “I went to confession. He listened and gave me some advice. I was impressed by the fact that [between confessions] he was reading a book on ascetical theology that had just appeared. You could see that he did not want to waste even a minute between one penitent and another; he was keeping himself up-to-date and studying.” After this Luciani carried the photo of this small and stooped white-bearded friar in his wallet for the rest of his life. After Father Leopold’s death, Luciani often stopped at the Capuchin church in Padua to pray at his tomb.

The Early Life of Bogdan Mandić

Castelnuovo di Cattaro (now Herceg Novi) was once part of the Province of Dalmatia (now Montenegro), which in 1866 was part of the Austrian empire. The Capuchin Franciscan friars of the Province of Venice had been active in the region since 1688 when it was under the rule of the Republic of Venice. There, in Castelnuovo, Peter and Dragica (Zarević) Mandić, who were part of a fishing family, gave birth to their 12th child on May 12, 1866. They named him Bogdan, Slavic for “the God [Bog]-given one [dan].”

As a child, Bogdan was physically malformed (in adulthood he was less than 4.5 feet), frail and suffered from stuttering. He had, however, a remarkable inner strength. Many of Bogdan’s playmates were Croatians whose ancestors had split centuries before from the Catholic Church. Though he was one of them by birth he was separated from them by his Catholic baptism. By the time he was 16 he felt called to spend his life to bring about reconciliation between the East and the West. Bogdan noted: “I consecrate myself for the salvation of the beloved dissidents,” he wrote. “I will become a missionary to them!”

Bogdan decided that the best way to realize his dream would be to follow St. Francis of Assisi as a member of the Capuchin Order. He went to Italy and on Nov. 16, 1882, was received into their Seraphic Seminary in Udine. On April 20, 1884, he entered the novitiate at Bassano del Grappa, where he was renamed “Leopold.”

On May 4, 1885, Frater Leopold made his first vows. He then moved to the house of philosophy in Padua. Here his sense of calling to be a reconciler between the East and the West became more pronounced. In 1887, he wrote: “I, Brother Leopold, have understood the plan of divine grace today.” He added, “I have been called to the salvation of my people, the Slavonic people.”

After pronouncing his solemn vows in 1888, Leopold went to Venice to complete his course of studies in theology. During this time he also studied various Slavic languages and taught Croatian to his fellow Capuchin seminarians. Here he was ordained a priest on Sept. 20, 1890.

Early Ministry as a Capuchin Priest

When Leopold was asked to indicate the ministry he preferred, he said his great longing was to return all separated Orthodox to the Catholic Church. This would have meant returning to the Capuchin mission in his homeland. However, because of his frail constitution and his overall bad health (including stomach ailments, poor eyesight and arthritis), his request was denied.

But Leopold’s disappointment was not a setback. Admitting his frustration but acknowledging his frailty, he made a commitment “to devote all the actions of my life for the return of the separated Orientals to Catholic Unity.” He added that “each soul who needs my ministry will, in a way, be the Orient for me.”

During his first few years as a priest, Leopold was transferred to different places in the Province of Venice. In 1906 he was sent to Padua where, except for about a year he spent imprisoned because of his refusal to renounce his nationality, he would remain for the rest of his life.

Leopold was first assigned to be director of the Capuchin students studying philosophy and theology. He also taught patristics. Here, he thought, were other Capuchins whom he could inspire to fulfill his dream, writing, “I will use every means in my power to encourage young apostles who will engage in this work of the reunion of the churches.” In his formal conferences and informal meetings with students he kept repeating his dream.

The Capuchin form of life, especially in the houses of formation, was quite austere and regimented. Nonetheless, both in his use of authority and in his style of teaching, Leopold differed from his peers. His whole approach was defined not by the law but by mercy. Consequently, this created tensions. This contributed to his abrupt removal in 1914. At the age of 48 he was assigned to be a confessor in the adjacent Church of the Holy Cross.

Leopold’s Ministry of Mercy and Reconciliation

After his removal, Leopold spent most of his time hearing the confessions of Padua’s citizens as well as many pilgrims who had heard about the merciful way he treated penitents. Luciani described a particular moment of Leopold’s mercy: “One person who went to him had not been to confession for twenty years. When he had finished, Father Leopold got up, took his hand and thanked him, ‘Thank you, thank you for coming to me; you have agreed to have me receive your repentance after so many years.”

When accused of being too merciful in assigning penances, Leopold would respond, “If the Lord wants to accuse me of showing too much leniency toward sinners, I’ll tell him that it was he who gave me this example, and I haven’t even died for the salvation of souls as he did.”

In October of 1923, it was announced that Father Leopold would be transferred to Fiume, part of Dalmatia, where he would hear confessions in the Slavic tongue. Upon hearing of his transfer he went into the church next door filled with joy. He recited the “Te Deum” in front of the statue of the Blessed Virgin. After more than 40 years he was returning home.

After the people of Padua heard the news of his transfer, however, they besieged his superiors with requests for his return. Among these was Monsignor Elia dalla Costa, who later became Cardinal of Florence. The superiors relented. Within a week of his transfer Leopold was told to return to Holy Cross Church. Although deeply disappointed, Father Leopold made another offering of himself for the unity of the churches under the patronage of Our Lady whom he called his “parona benedeta” (blessed patron). He wrote:

I brother Leopold Mary Zarevich, through the grace of Our Lord and according to the wish of our Seraphic Father, St. Francis, within the limits and in order that I might accomplish the mission you have entrusted to me concerning the Oriental people, make a vow to labor for the eternal welfare of this people.

You can see in what circumstances my life has developed and with what anxiety I am oppressed. Please, I beg of you, take this cause into your hands. Your most humble servant.

Back at Holy Cross Church, beginning with daily Mass the people of the East were on Leopold’s mind. There he presented himself “as a victim for the Redemption of my brethren though the unbloody Sacrifice of Christ which I offer daily on the holy altar.” After that he would sit each day for 12 to 15 hours in his old rough chair hearing people’s confessions, offering them the mercy of the God of both the East and the West. As he sat there patiently, he found a way to realize his larger mission of reunion in the sacrament. “Each soul who needs my ministry will, in a way, be the Orient for me,” Leopold said.

Near the end of his life Leopold contracted a form of esophageal cancer. On July 30, 1942, while preparing for the liturgy, he collapsed on the floor. The friars took him to his cell where he received the sacrament of the sick. While they sang the “Salve Regina” to the Mother of Mercy, as they prayed the words, “O clement, O loving, O sweet Virgin Mary,” Leopold died.

During the bombing of World War II the church and part of the friary where Leopold lived were demolished, but Leopold’s cell and confessional were left unharmed. Leopold had predicted, “The church and the friary will be hit by the bombs, but not this little cell. Here God exercised so much mercy for people, it must remain as a monument to God's goodness.” Pope John Paul II ended his 1976 sermon about Father Leopold Mandić with these words: “above all we should try to imitate his great example of a good and holy life.”

Michael H. Crosby, O.F.M., Cap., is based in Milwaukee. His latest book is Fruit of the Spirit: Pauline Mysticism for the Church Today (Orbis).