On the Run: A convicted murderer finds salvation in prison. 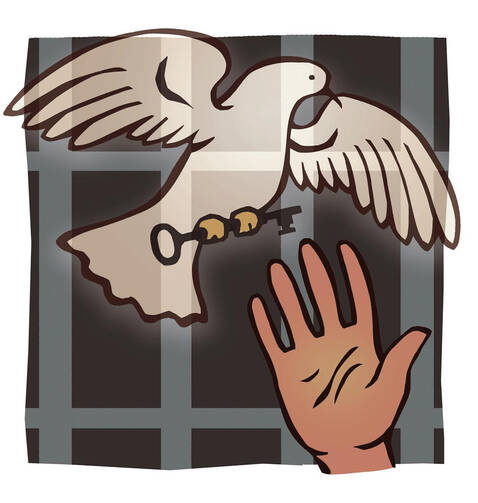 It is 8 a.m., and I am at Graterford, a state prison in Pennsylvania, standing in front of Stan Rosenthal. At 5 feet 6 inches and 150 pounds, with a kindly, almost angelic face and dark brown eyes that light up like lightning bugs, Rosenthal hardly looks like a hardened criminal.

I am at Graterford to visit him. He is there because he clubbed and stabbed his girlfriend to death in a drug-addled, jealous rage after she refused to sever ties with a former boyfriend. When he was captured by the Philadelphia police, he said, “I should be punished for what I did.” He was; he got life without parole.

When he first arrived at the prison, just outside of Philadelphia, Rosenthal viewed it as a black hole—nowhere to go or grow. His cell, six paces by 12, framed his world. Then suddenly one day, in an epiphany, he came to view prison life as an opportunity to turn something bad into something good, and he crawled out of that dark space.

“One day I looked deep within myself and found a point mentally and spiritually where I wanted to focus on doing the right things. I decided I would become an asset to myself, my family and friends, my prison community, and to my creator,” he tells me. “I found salvation.”

Rosenthal tells me he read about a philosophy that proposes a strong sense of spiritual strength is a basic building block for making things right. Rosenthal felt he needed more balance in and control of his life. He hoped this would help him to grow and to take on the responsibility for repairing the harm he had done. He says he worked hard to develop new skills to make himself a better person and, by extension, to positively affect the communities of inmates, family and society.

Running His Own Race

The day I visit Rosenthal he had just completed a 12-mile run, 48 laps around the prison yard. Inmates look at him in wonder—awe, really. Rosenthal runs every day, about 75 to 80 miles a week. In one stretch he ran 425 straight days. And get this: He has never run as far as a city block on the outside. His running has made him a celebrity of sorts around the prison. One day as he was circling the prison track, he passed by a crush of inmates standing nearby. One of them said, “There goes the Marathon Man.” The name stuck.

The inmates who knew him—and even those who only knew of him—whispered his name from cellblock to cellblock. Not Stan Rosenthal, mind you, but “the Marathon Man.”

“Running put a spiritual balance and focus into my life and helped to unburden me from the baggage of my past,” he tells me. “Running enabled me to take myself out of prison by processing a mental imagery of God’s creations: I could smell the leaves on a tree, feel the soil and the grass on my feet, understand the majesty of the sea.”

His salvation did not stop with running. He wanted to take and give more from prison life. He began to study Latin, Shakespeare, meteorology and religion, among other subjects. When Rosenthal took up Latin, Bill Mohan, a Latin teacher at the Jesuit-run Georgetown Prep in Washington, D.C., heard about him, contacted him and offered to help him with translations. Rosenthal took Mohan up on the offer. He would send Mohan translations, and Mohan would correct them. It paid off. Rosenthal took four online Latin courses and got all As.

Rosenthal’s ongoing salvation did not stop with that degree. He started tutoring inmates for their General Educational Development exam. He became a leading light in the Victim Offender Reconciliation Program. He raised money for Big Brothers Big Sisters. He was the top salesman of Girl Scout cookies; his campaign was called “Tough Cookies.” And he directed an interfaith program in prison that brought Catholics, Protestants and Jews—and even some atheists—together for meaningful dialogue.

Still, despite his redeeming values and virtues, Rosenthal will never outrun the prison system. Now 55, and behind bars for 26 years, he will see the door to his 6-by-12-foot cell—containing a bed, toilet, sink and lots of cardboard boxes filled with books—slam shut behind him every day for the rest of his life. It is there that he will grow as old and gray as the prison walls that trap him.

But perhaps it can be said that Rosenthal has prevailed, even won, in terms of his soul. After all, in the eyes of God, good is good even if the field of its victory is a narrow one. “Anytime I do something good,” he tells me, “I know I am moving in a spiritual direction.”

B. G. Kelley is the author of the poetry book, The World I Feel and was a writer for the television film, “Final Shot: The Hank Gathers Story” (1992). He is a regular contributor to The Philadelphia Inquirer.

Show Comments (
3
)
Comments are automatically closed two weeks after an article's initial publication. See our comments policy for more.
Paul Ferris
7 years 8 months ago
What an inspiring story.....thanks for publishing it.
Beth Cioffoletti
7 years 8 months ago
I am very glad for Mr. Rosenthal and glad to hear this story. But there is another side to the story of prisoners locked up for life that is just as true and needs to be told and heard as well. These are the men and women who are harshly sentenced (LWOP) for relatively minor offenses. Their sentences do not match their involvement in crime. They made mistakes mainly of judgement as teenagers, but had no prior criminal records and have had perfect behavior records while in prison. Yet they will never get out. (See: Mandatory Minimum Sentencing; See: the Felony Murder Rule) They have not made the dramatic turnaround that Mr. Rosenthal has, because there is no dramatic turnaround to be made. They were good people to start with. What is truly amazing is the way that they have been able to grow into wise and compassionate men and women despite the profound injustice that they have been dealt and the silence and indifference of the public at large to their tragedies.
Maureen McKew
7 years 8 months ago
Several years ago, when I worked for Villanova University, I had the opportunity to meet Stan at Graterford, along with Tyrone Werts (since released), Bruce Norris, and Wayne Covington. I attended Stan's graduation. These four men, all Villanova alumni, remain in my memory. They have accomplished so much good during their years at Graterford and their love of education is contagious. One of them inspired me to go back and reread the Aeneid although, unlike him, I couldn't read it in the language in which Virgil wrote it. Great credit is due to Father Kail Ellis, OSA, currently vice president for academic affairs at Villanova, and to the late Dr. James McKenna for developing and supporting the bachelor's degree program at Graterford. Many thanks also are owed to the generous Villanova faculty members who journeyed to the institution, especially Dr. Barbara Agnew, CPPS, who taught theology.