The Rising Revisited: In Ireland, the past is still painfully present. 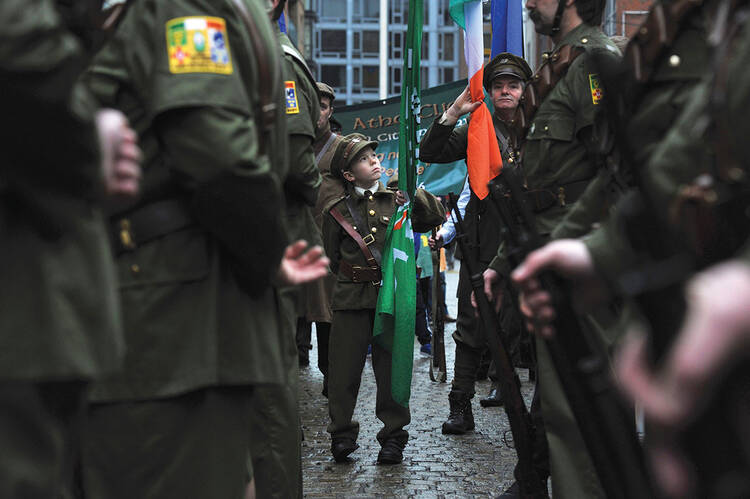 How do we remember a story of the past? The writers of the Midrash agonized about where to begin a story; it is a serious question. Sometimes, depending on the story, it can be the difference between death and life.

Where do you begin the story of the border that separates the two jurisdictions of Ireland? Some would say: Northern Ireland is a country that was established in 1922. Others would say: Most of Ireland separated from British occupation as a result of the uprising that happened in 1916. Others would begin it: Terrorism began in 1968 with the outbreak of the Troubles. Some would begin by saying: The English King Henry VIII declared himself King of Ireland in 1541.

Speaking Irish and English as a small boy, I once asked my parents why we did not speak Irish all the time. Cue a long silence. Cue a story: “Once upon a time there was a place called England. The people from there liked to go places. So did we, but we had a great hunger and preferred the ordained migrant routes.”

This is not any laughing matter, of course. Once, at Corrymeela, I was in a roomful of people who were discussing the Troubles, those 30 years between 1968 and 1998 when over 3,300 people were murdered and over 100,000 were injured, all in a jurisdiction with a population of about 1.5 million. To discuss the Troubles is to discuss your neighbor, your friend’s dad, your sister, your local shopkeeper. It is to discuss the ways in which people killed people and blamed other people for starting the trouble that was now killing people. It was the way in which people learned new rules about whom to trust, what risk was and how to tell us from them.

So we were in a room, about 30 of us, and we were talking about the conflict. Somebody in the room had served in the security services, another had been a member of a paramilitary organization, each seeing his or her own service as legitimate and the affiliation of the other as less. One saw the other as a terrorist. Another saw the other as a member of an occupying army, resistance to whom was not only a duty but also a witness protected by the Geneva Conventions. One of them said, “I only ever shot legitimate targets.” Another person in the room said, “I guess that made me a legitimate target when I was 8 and men from your group shot at me.” Sometimes the beginning of the story tells the way the story will end.

In Ireland this year, 2016, we are celebrating the 100 years since the 1916 Uprising, the failed attempt at a revolution that, in its own way, contributed to the cycle of events that led to the eventual withdrawal of British presence from most of the island of Ireland.

“It happened,” says Commemoration, “and I mark that it happened.”

It’s a tricky business. When Arlene Foster, the first minister of the Stormont Assembly in Northern Ireland was asked if she would go to any of the 1916 celebration events south of the border, she said no because the events of 1916 constituted a “violent attack on the United Kingdom.” She did go, however, a few months later, but made it clear that she was going not even to a commemoration but to a “more considered discussion” about 1916.

Coming from Cork, I do not share Ms. Foster’s political outlook on the jurisdictional affiliation of the territory north of the border. But I do share her concern for language. What you say about something indicates how you think and who you are. And here, borders are tricky business. The border exists for some and not for others. To celebrate 100 years since the 1916 uprising says something about the celebrators and says something equally true about the detractors.

Re-Membering of Things Past

And what does remember mean anyway? It might be helped by a hyphen. To remember is to re-member, almost as if by re-membering we give something body again. It is no longer so much in the past but is being called to mind and brought into the present. To re-member is to re-present. And so we are saying that something in the past is not gone; it is here and now—in effect, if nothing else.

The 1916 Easter Uprising at the General Post Office in Dublin came near the beginning of the First World War. At that time, the British Empire was alive and strong. The Easter Rebellion was just one of the latest string of failed uprisings against it. But it came at a time that turned out to be strategically well selected.

British attention was elsewhere. World-War-I elsewhere. While villages full of Irishmen joined to fight alongside Britishmen at the Somme, Irish leaders were using the divided attention of British leaders to their advantage. Negotiations and compromises began. Ireland was partitioned.

By 1968 Ireland was small news in Great Britain. The historian Judith Brown says that in 1945, 700 million people were living outside of the jurisdiction known as the United Kingdom under what was called the British Empire. Twenty years later that figure was down to five million—and three million of them lived in Hong Kong. By the time the Troubles broke out, the world had been changed. The maps were different. Literally.

So, for those of us living in Northern Ireland or the north of Ireland or the Six Counties, or, in my own personal bid to irritate everybody, (the)north(ern)(of)Ireland, remembering is a complicated thing. We remember when our discord seemed to mean a lot and then meant much less. We remember that we are a people broken by ourselves and by our relations with our closest neighbors. We remember lives lost and lives taken. We remember, or at least we try to remember, what things might have been; and we try to create a today that salvages as much of what could have been as we can. We try to create a new could-be through moments of courage and life.

To remember, when you know that for some the remembrance is a celebration and for others a desecration, is a complicated calling. And yet, that is the truth for us in both Irish jurisdictions in 2016. If we are to find ways to share this small island with each other, we must do so in a way that creates rather than destroys. We must remember in ways that do not display an idolatry of victimhood by easy scapegoating. It is too easy to say, “English people were bad and we were the victims.” Many Irish people were contributing to, if not complicit in, the circumstances that alienated people in their own land.

To speak of “the past” is too singular. It needs to be troubled. “The past is such a curious creature,” Emily Dickinson wrote in Poem 128. Curious, perhaps meaning “odd” or “strange” or perhaps coming from a Latin word meaning “care” and being linked to the word “curate” in English. It needs to be tended, the past. Or perhaps the past is not the past. The past is what we make of it in the present. So in that sense the past is today because today we will re-member what we wish or need the past to be.

All of this might seem like a poet’s fancy dabble into silly words. But “silly” once meant “happy” or “blessed.” Silly are the poor, for theirs is the kingdom of heaven. Silly, in the modern sense, are those who neglect the past, because it will bite you.

Not Hostage to the Past

Today there are wars along borderlines drawn in the 20th century. How will those wars be remembered in 100 years? In 2101 what will people in New York say about what happened 100 years previously? What will the residents of what is now Afghanistan say? How will we begin that story?

Ireland’s complicated challenge in remembering the past, that curious creature, is vital, and attention to our endeavors may inform endeavors to remember other centenaries out of the 20th century’s bloody history.

Jesus of Nazareth knew something about the past and honored it without becoming its hostage. “Your disciples shouldn’t eat on the Sabbath,” some people said to him once, and Jesus told a story about the past in a way that made sense for the present and so opened up the future. Religion, as David Dark says, is about knowing who we are and why we act the way we act. We must not be its hostages; we must be its hosts.

For us, in the work of Corrymeela—and the work of so many other witnesses of peace in Ireland—we tend to think that the past needs to be remembered together. It needs to be a communal exercise. To remember well is to recognize the remembrances of those who remember differently. It is to know that others start the story at a different time and measure the pain or promise differently. We are, I hope, remembering in a way that will unfold moments of courage today, rather than demonstrate an addiction to a blame game about the past that destroys rather than displays.

Once, at Corrymeela, I heard two people talk. (A few details have been changed for reasons of privacy.) “For us in Ireland, this is a special week,” one person said. It was mid-March, close to the celebration of St. Patrick’s Day.

“We’re not in Ireland,” someone said.

“Yes, we are,” another replied.

“Oh God,” someone else said.

Finally yet another person—inspired more by intuition than logic—said, “My brother was killed on March 17, St. Patrick’s Day, also his birthday.”

We were distracted by empathy, and when we returned to the debate about how many minutes to spend on six counties worth of history, we returned with a new sadness, a new tenderness, a new solemnity about the ethics of remembering. We remembered in a way that could, we hoped, help rather than harm. We disagreed still, true. But agreement was not the goal anymore.

Let us remember dear Emily, not at all Irish, who nonetheless says:

The past is such a curious creature,
To look her in the face
A transport may reward us,
Or a disgrace—
Unarmed if any meet her,
I charge him, fly!
Her rusty ammunition
Might yet reply!

We can be transported by the past. Or shamed by it. Or arrested by it or flee in the face of it or shot in the face by it. To look the past in the face is to implore the past to look us in the face. We cannot avoid it. We might as well name it and name it well, with all its power and potential, its pathology and its prescience, its pain and its promise. 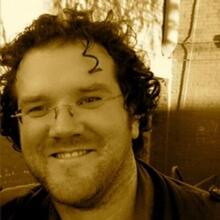 Pádraig Ó Tuama is a poet, theologian and the leader of the Corrymeela Community in Ballycastle, County Antrim, in Northern Ireland.