Walking is good for the heart. Too often we see it as a sinister activity 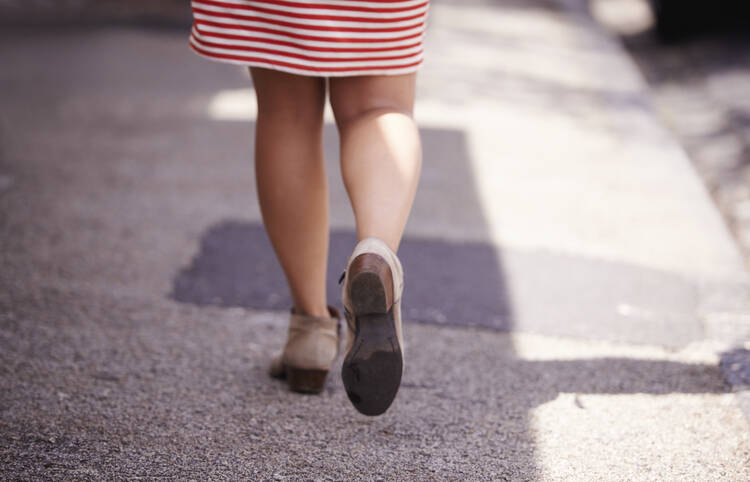 Walking is a human right. There are physical, psychological and spiritual benefits to exploring our world on foot. The activity invites wonder at our world and contemplation about our place in it. In “Laudato Si’,” published just over a year ago, Pope Francis stresses the importance of “landscapes which increase our sense of belonging” and provide “a coherent and meaningful framework for [our] lives.” These landscapes do not have the same effect upon motorists and passengers who might see unplanned stops as irritations and other people on the road as adversaries.

But over the past century, many have come to see pedestrians as suspect, even dangerous, and walking has been criminalized in many circumstances. Ken Ilgunas, the author of Trespassing Across America, recently wrote in The New York Times about his experiences hiking in the United States and encountering “No Trespassing” and “Private Property” signs at every turn, even in uninhabited areas. He says that what the Scottish call “the right to roam” has been steadily eroded in the United States in both urban and rural settings.

This hostility toward walkers is a public health issue. Not only does it discourage physical exercise when the United States is coping with rising obesity rates and related health problems; it literally kills people. Mr. Ilgunas, citing the advocacy group Smart Growth America, writes that more than 47,000 pedestrians were killed between 2003 and 2012 along roads, often because there was no safe and legal place for them to walk.

There are efforts to restore the right to roam in the United States. For example, New Jersey legislators are now working on a proposal to guarantee access to the shoreline; this could include requiring towns to maintain public sidewalks near beaches. While even well-off people may benefit from being able to walk barefoot through the sand, the everyday burdens of hostility and indifference to walkers fall disproportionately on lower-income families, especially those who cannot afford cars. In 2011, a Georgia woman was convicted of vehicular manslaughter after she crossed a highway on foot with her four children and a drunk driver killed one of them. (After a public outcry, her sentence was reduced to probation.) In her case, there was no crosswalk or traffic signal near the bus stop she used, a situation increasingly common in our sprawling suburbs.

This spring, the city council of St. Louis Park, Minn., voted to add sidewalks to three suburban neighborhoods, but some residents protested. One wrote that the sidewalks would create an “inner-city wasteland” with “hoodlums standing around on the corner.” A fight over installing sidewalks on a road in Clifton, N.J., (used by Orthodox Jews to reach synagogues by foot on the Sabbath) has been going on for 16 years.

While some neighborhoods fight against sidewalks, others ask for them but are ignored. According to a recent Washington Post story, a mostly black neighborhood in Potomac, Md., just 10 miles from the nation’s capital, has no sidewalks leading to the nearest bus stop—which is 2.8 miles away. Since many residents cannot afford cars, this asphalt isolation only makes it more difficult for them to find and hold jobs.

Pedestrian activists often quote the anthropologist Margaret Mead: “Any town that doesn’t have sidewalks doesn’t love its children.” Or it does not want them in the first place. Young adults ready to start families show a preference for walkable communities, but many local governments do not want the financial burden of public educational systems, so they use zoning laws and onerous permitting processes to keep out all but low-density housing, which is both less walkable and harder to connect to schools and downtowns. (According to the Safe Schools Partnership, only 13 percent of children walked or bicycled to school in 2009, down from 50 percent in 1969.)

Many new families can afford only to rent in apartment buildings or to buy small-lot homes, so suburbs fight development of such housing—unless assured that only childless people will move in. Teenagers on sidewalks seem to be a particularly nightmarish vision in more orderly and exclusive towns. If you are not in a car, you are not welcome.

We need to fight the perception that walking in public is a sinister activity, and we need to preserve common space where all can encounter nature and meet their neighbors. As Pope Francis reminds us in “Laudato Si’,” “Others will then no longer be seen as strangers, but as part of a ‘we’ which all of us are working to create.” To rephrase the pope’s words in another context, we do not need more walls, we need more sidewalks.