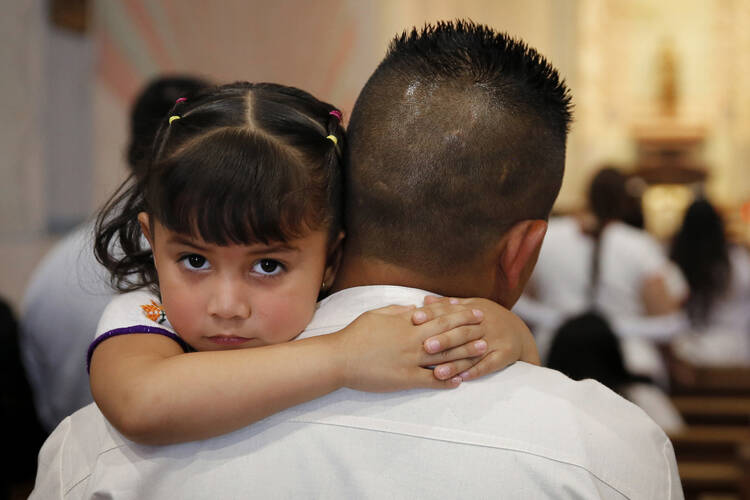 Now that the Synod on the Family has concluded, Pope Francis is expected to issue a report, and perhaps an apostolic exhortation, based on the synod’s final recommendations. One of these recommendations is to discern what forms of “exclusion” experienced by divorced and civilly remarried couples can be overcome. Pope Francis has communicated that certain changes in pastoral practice are necessary with respect to how the church treats adults in these irregular marital situations.

As the church goes forward in a process of discernment, the church should be attentive to the voices of the numerous children affected by the divorce culture and the sexual revolution. By doing so, the church may better recover a truly pastoral approach that seeks conversion of heart, growth in Christ’s love and “accompaniment” of all souls.

Although no one should be indiscriminately marginalized from the life of the church, not inviting those who have divorced and remarried to Eucharistic Communion is the path most consistent with both justice and mercy, especially for the children living in and trying to cope with an irregular union of a parent.

In a general audience address on Aug. 5, Pope Francis made comments indicating that the church needs to adopt a different posture toward the divorced and remarried precisely out of its concern for children. On the situation of children he said:

If we then also look at these new bonds through the eyes of the young sons and daughters—and the little ones watch—through the eyes of the children, we are aware of a greater urgency to foster a true welcome for these families in our communities. For this reason it is important that the style of the community, its language, its attitudes, always be attentive to people, starting with the little ones. They are the ones who suffer the most in these situations.

Pope Francis rightly calls us to consider the needs and well being of children. Some of his comments, however, also seem to suggest that children are harmed by the current practice of excluding their divorced and remarried parents from receiving Communion. This notion is mistaken. A change in pastoral practice concerning the divorced and remarried will not only have the practical effect of diluting the church’s life-giving teachings on marriage and sexuality; it will also be unmerciful and unjust to the children of those who are in irregular unions, since it is those children who suffer the most from their parents’ choices.

We write as members of the so-called divorce generation: children who were born and grew up as divorce laws were liberalized, making divorce more socially acceptable. Each of us has been personally touched by divorce, with parents who themselves have divorced and/or are now living in irregular unions. We are part of a generation of walking wounded. While our experiences are different, we all continue to cope with family fragmentation and sexual brokenness playing out in our own lives or in the lives of family and friends.

An overly solicitous pastoral approach, rooted in an abstract conception of mercy, will deeply undermine the church’s evangelical credibility. It fails to appropriately accompany the children of those who have divorced and remarried.

Many of these children are angry and confused as to why their parents turned their lives upside down, even while they continue to put on a “brave” face due to fear of abandonment or letting their parents down. These children are carrying this baggage well into adulthood as they struggle to find stability, trust and love in their own relationships.

Contrary to what some comments by certain synod fathers and the Holy Father seem to imply, relationships fail and divorce happens in many cases primarily because of the willful choices of adults. Indeed, the failure of relationships is often due to the unwillingness of one of the spouses to love and sacrifice to the extent required by the vocation of marriage.

Given this reality, proposals that the church should invite those in irregular marriages to receive Communion, even after some act of penance or discussion with a priest in the “internal forum,” would dismiss the needs of children in order to satisfy the desires of adults. It confuses the little souls that the church is responsible for forming. It communicates that divorce is not a big deal, which would have ripple effects in the church’s pastoral practices and in our homes. And it should come as no surprise when a child, watching as the church “sides with” the adults who are, often, the very ones who have caused such great hurt in his or her life, grows up skeptical of the moral authority and evangelical credibility of the church.

What children need is for the church to stand with them and to speak the truth about what their parent or parents have done. As Catholics, we understand that God’s judgment is a sign of his mercy and love, especially the judgment of those actions that have destructive consequences for the people we love. Lest we forget, encouraging repentance and reparation for our wrongs toward others is for the good of our souls and for the well being of those around us.

And this brings us to our main concern. We are not bitter young people who fear change or want to see parents in irregular unions punished. On the contrary, we love our parents and want them to go to heaven. As the church is the instrument of healing for broken and wounded souls, we pray that by being excluded from the Eucharist they will recognize the gravity of their sins and seek repentance.

We do not believe, however, the church can fulfill this responsibility by papering over sin under the guise of mercy. Mercy and love must be lived in truth. If they are not, they become merely patronizing sentiments and ultimately do not have the effect of bringing people closer to Christ. To be a true field hospital in battle, we must come with medicine, not just bandages.

Based on our own experience, as well as observing our peers of all stripes and backgrounds, we have found the clarity of the church’s witness on questions of marriage and sexuality, including the theology of the body, to be transformative, life giving and healing. From those with same-sex attraction to those caught up in the hook-up culture, the splendor of the truth—coupled with friendships and relationships that help people live this truth and explore paths of healing—can give new life.

We were initially discouraged by both the “instrumentum laboris,” or working document, and the proposal from Cardinal Walter Kasper to create a penitential path to Communion for the divorced and remarried without a decree of nullity. Neither seemed to have in mind or to be rooted in the experiences of the countless victims of divorce and the sexual revolution, including the many young men and women who have experienced hope and healing from the “hard sayings” of the church’s moral teaching.

Whether the “Kasper proposal” is still considered a viable option after the synod or whether it has been effectively dismissed, it remains critical for the church to listen to the voices of the divorce generation. Should Pope Francis and the synod fathers widen the discussion and the discernment process, they could consider research from family scholars who have identified the ways in which cohabitation after divorce and second marriages are often deeply harmful for children. (See articles here, here, here, here and here.)

Likewise, they might consult the many stories Jennifer Roback Morse is collecting from the victims of divorce and the sexual revolution. The stories are quite painful, and showing greater attention to them will perhaps shake us out of our current stupor of minimizing the harm and evil of divorce.

Today, the church needs more clarity, not less. Divorce is an act that breaks apart families, neglects children and harms the community. When compounded with adultery, it is an affront to the sacrament of marriage and to the plain words of Christ, and it merits exclusion from Eucharistic Communion. Either we believe that Christ and his teachings are the way, the truth and the life, or we do not. Greater fidelity and boldness, we believe, bears great fruit, while false compassion undermines the church’s evangelical credibility.

Pope Francis rightly wants us to go forth into the peripheries and share the joy of the Gospel, yet we are spending enormous amounts of time and energy fighting another intra-church battle over settled matters. This battle, in itself, indicates that there remains a critical need to clarify the proper mode of evangelical engagement. Going to the peripheries with love and mercy means willing the authentic good of others; but to will the authentic good means to first know what constitutes the good and to be willing to proclaim it. When we go to the margins of society, we must do so while remaining always in the truth of Christ.