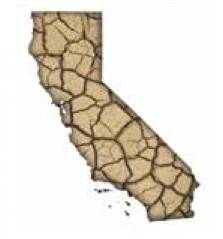 Much of the East Coast groaned under the weight of yet another winter storm in early February that disrupted transportation and commerce and wore down even the hardiest snowbound souls. But in the meteorological West, the opposite dilemma continued to grind down California residents. A third winter of drought has produced the driest conditions in California since before the appearance of the first Spanish missions. In fact, California is well on its way to breaking 500-year precipitation trend lines. The severity of California’s statewide drought is compounded by drought conditions throughout much of the West and Southwest. A winter snowpack reduced by 80 percent suggests that in the spring, snowmelt from the Rocky Mountains will fail to provide adequate recharge for the diminished Colorado River, the region’s essential water source.

Conditions are so bad that California’s Catholic bishops have called for divine intervention, praying for rain and for the well-being of those most at risk from a water shortage. Voluntary water rationing is leading to brown lawns across the state, cracked riverbeds and spirals of dust in the wind. Once lush farm fields in California’s Central Valley are beginning to resemble desiccated moonscapes.

California’s good earth produces much of the vegetables and fruits sold in supermarkets all over the United States. As growers abandon crops to the drying conditions, food prices are sure to rise. The impact will not be limited to U.S. consumers, but will be felt around the world as scarcity pushes up prices on food staples. If the drought persists into the summer, tinderbox conditions may lead to wildfires, and dust and heat themselves will become hazards to public health.

Climate researchers report that the current drought is no anomaly; in fact, the cooler and wetter conditions of the last few decades may have been the climatic oddity. Scientists have documented multiple droughts in California over the last 1,000 years. Some lasted as long as 10 or even 20 years in a row. Two mega-droughts lasted 240 and 180 years. The possibility of long-term drought conditions in the region should be a presumption of civic and agricultual policy planning. Unfortunately, as Scott Stine, a professor of geography and environmental studies at California State University, East Bay, recently told The San Jose Mercury News, “We continue to run California as if the longest drought we are ever going to encounter is about seven years.” Californians are “living in a dream world.””

The current drought offers an opportunity, albeit an unforgiving one, to reconsider the limits of human interference with natural forces. State and federal officials will be tempted to subvert nature’s ambitions with emergency interventions and water-sourcing or water-moving projects. One plan includes a 35-mile-long, $25 billion underground tunnel system. These complex and costly efforts are front-loaded with unpredictable ecological hazards of their own. Worst of all, instead of achieving their intended purpose, water sustainability, they may ultimately bring about the opposite, as industry and agricultural interests rush in to exploit any improvement in capacity.

As the November elections approach, Congress has become eager to demonstrate its attentiveness to the California crisis in a legislative bidding war aimed at offering relief to farmers. House proposals, at least, hew to the state’s tradition of water-grabbing. One idea would mean abandoning years of restoration efforts to pump unlimited amounts of water from the Sacramento-San Joaquin delta to the south, neatly pitting fish (and residents reliant on the fishing industry) against farmers and creating another in a series of stopgap measures for dealing with the regional water scarcity. But lack of rain is the underlying problem, and the days of robbing a dried-out Peter to pay off an arid Paul are coming to an end.

Instead of accelerating cycles of human intervention, the more challenging call to stewardship and sustainability demands a more patient and measured consideration of how to best build up local, sustainable water capacity. A more ecologically attuned approach would require changing habits of conservation and rain reclamation and cleaning up polluted ground basins that could “store” water in the communities where it is needed. It would require a reallocation of resources that are now diverted to water-reliant industries, reconsidering the mix of agricultural production in the region and setting limits on population and economic growth. It will mean finding a way to end a futile battle against nature that succeeds in draining fiscal reserves while briefly putting off the day of water-use reckoning.

The Catholic bishops of California asked God in prayer to “open the heavens and let His mercy rain down upon our fields and mountains.” But they also prayerfully implored that political leaders seek the common good “as we learn to care and share God’s gift of water for the good of all.”

Thanks, the statement appears to be in error, looking into it now, but I believe it is a conflation of the conditions in the Sierra Nevada range with Rockies. It is the California range that is experiencing record lows in snowpack.

I thought republicans didn't like federal spending except for defense, anyway.

I think your playing fast and loose with the history and philosophy of science. If we were to become as agnostic as you seem to be about science, we may as well give the whole thing up and replace it with voodoo

I have read and studied both the history of science and the philosophy of science. I have taken several courses in the scientific method in graduate school. So I would not make aspersions.
Stanley Kopacz
8 years 11 months ago
What you've read or studied is apparently irrelevant. Atheists have read the Bible, apparently to little effect. The statements of your previous post, if taken seriously, negate ANY authority in science, ANY time. The round earth itself would be doubtable by your epistemological criteria. Recently, measurements at CERN indicated that neutrinos travelled faster than light. When I discussed it with some young physicists, we unanimousuly agreed that it was nearly certain that there was a flaw in the timing of the experiment. Conservative commentator Charles Krauthammer, before the measurements could even be reexamined, claimed this showed how the foundations of science could be shaken, and you couldn't trust greenhouse gas theory. Well, it turned out that there was a flaw in the measurement and Einsteinian relativity stood. Young physicists right based on book learning and sticking to well established theory, ideological commentator based on sloppy thinking wrong.
Bruce Snowden
8 years 11 months ago
Maybe this is so boneheaded, giving reason why no one has mentioned it, but what about desalination of sea water piped to crop raisers, as a way to help address California's mounting water supply deficits? If astronauts can technologically turn urine into drinking water, isn't their dependable technology able to turn sea water into water fit for human, animal and plant consumption?
John Arthur
8 years 11 months ago
It's not particularly boneheaded, but not terribly practical either, I'm afraid. There are very serious issues having to do with determining the best method of desalinating sea water here in California. First is where would we get the additional power necessary to remove the salt from the seawater? Our renewable sources are currently insufficient and additional electricity generated via petroleum would probably increase air pollution. Second is, how to put the salt we remove back into the ocean? The residue of the desalination process is many times saltier than the ocean it is returning to and may create some ecological dead zones. For now we need to concentrate on conservation and efficiency, but your prayers are essential, too!
Michael Barberi
8 years 11 months ago
If the editors or anyone else finds the best solution, or an excellent one, among the many solutions that might work, please send them along with an appropriate business or strategic plan to: the governor and legislators of California. In the meantime, I will also pray to God for more rain.