The qualities of 'mercy': the literary roots of Pope's Francis's favorite word 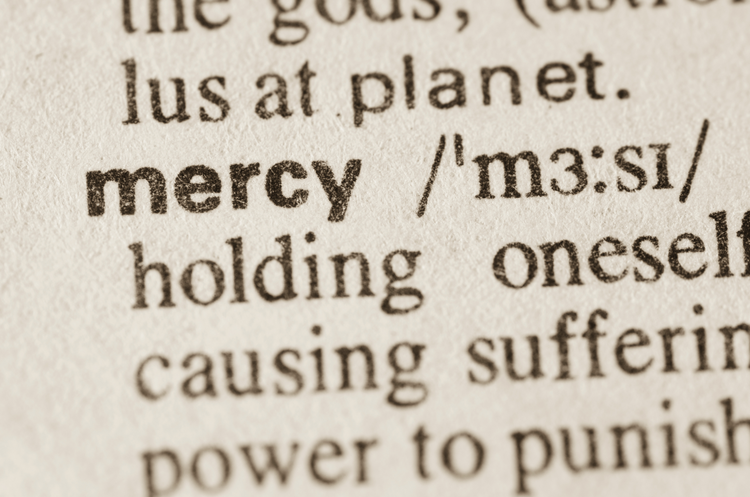 What is Pope Francis’ favorite word? Judging by his papal motto, the title of his recent book and the name of the Jubilee Year he kicked off this past December, I’d be willing to put money on “mercy.”

“Mercy” was not a word I used or thought about much before Pope Francis started saying it all the time. But since he invited everyone to a year to “contemplate the mystery of mercy,” I figured it would be a good time to get a bit more familiar with the word itself.

So I reached out to Kory Stamper with some questions. Kory is a lexicographer at Merriam-Webster, where she writes dictionary definitions as well as articles for M-W’s various websites. A self-proclaimed “word nerd,” Kory blogs and talks about the history and use of English with a wonderful blend of insight and humor, and she graciously took a few minutes to share some thoughts about mercy.

The Catholic Church is all about “mercy” these days. I’m wondering if Pope Francis’ emphasis on the word has led to an increase in people looking it up on the Merriam-Webster site around the start of the Jubilee Year in December or the release of the pope’s new book in January. Can you track how often a word is looked up?

It’s a little hard to go through the analytics on the main site, but I did my best, and it looks like mercy did see a significant spike in lookups in December and January. And it looks like Pope Francis’ declaration had something to do with the spike, if you look at the “Seen & Heard” comments all the way at the bottom of the entry.

Where and when does the word mercy come from?

Mercy has an interesting history. It was brought into English by way of medieval French, where it referred to clemency against one who has offended, and our earliest English use is in a 13th-century homily: “Lord, have mercy on us.” The French adapted the word from the Latin merx, which means “merchandise” and was used in the very early Middle Ages to refer to a price paid for something, usually labor. So when mercy appeared in English, it still had overtones of payment for something. You could make a theological meal of that, of course, and plenty of early use does. Most of the earliest uses of mercy are as a petition for God’s mercy on a sinner’s soul.

The “compassion for an offender” meaning is one of the earliest meanings, and very specific. Mercy in those uses was tied to the idea of wiping out a debt, invalidating a crime, restoring to health or wholeness or society. It assumed that the object of mercy was not deserving of compassion, that the party showing mercy was literally bearing the cost of the crime or debt on themselves.

Of course, the biggest uses of mercy in that sense were petitions to God for mercy, for a removal of justified judgment and punishment. The “compassion towards the unfortunate” sense was a natural extension of that. As the church is meant to be Christ incarnate to a broken world, so we bring Christ’s compassion to those who are suffering. This English use traces back almost directly to Mt 25:35-37, in which Jesus explains how the Father will separate out the sheep from the goats. A 14th-century laypersons’ catechism explains that it behooves the Christian to do these “seuen deds of merci” (seven deeds of mercy) laid out by Jesus in this passage, which is what gave rise to the seven corporal works of mercy in the medieval church.

With this, the orientation of the word mercy shifted away from compassion for the offender to compassion toward all in need.

Recently, I had a conversation about the word with a group of high school teachers. One said it sounded weak to him. I imagine that’s connected to the way it is used in the context of sports and other competitions—showing “no mercy” is the surest path to victory—or that game called “mercy” I played as a kid, in which you tried to hurt the other person until the loser gave up by saying “Mercy!” Do you have any thoughts on its current connotations?

It can be hard to track all the connotative uses of a word, but it sure seems like mercy shows up quite a bit in negative constructions like “no mercy,” which would definitely lead people to view mercy as “weaker” or less efficient than a word that might have stronger, more positive connotations for similar work, like “justice.” When you also take into account the antiquated sound of something like “have mercy!” or the sort of old-fashioned tone of an exclamation like “Lord, have mercy!” (which is the sort of thing you imagine your Nana saying upon hearing some juicy gossip), it’s not surprising that people may think of mercy as being something outdated, passive, weak.

In addition to your language work, you serve as a deacon at City Church Philadelphia. Could you talk about the word from your ministry perspective? Do you use it often?

My church does use the word mercy as we talk about our ministry in the city and elsewhere. You hear it from the pulpit, in study groups and within ecumenical ministries, though we often pair it with the word justice. To people who have not encountered the word mercy before, apart from Cross-Fit “No Mercy” gym posters, pairing it with justice helps seat acts of mercy in a kingdom perspective.

Justice is a word that most people resonate with, and in Philly you see injustice (or maybe “unjust-ness”—things that are not the way they should be) everywhere you go. It touches everyone on some level, even if that level is one that doesn’t seem to have much bearing on the kingdom of God. I head out to refill the parking meter, and when I’m two feet away, the Philadelphia Parking Authority sees me and writes an expired-time ticket anyway. Most people long for justice in the truest sense of the word—they want things to be right.

When Jesus came to us, the Father sent him as one of us: to dwell with us, to sit with us in our misery and pain and to inhabit true injustice—because what could be more unjust than God himself dying a criminal’s death? He could have righted all injustice and enacted true mercy with a snap of the fingers; instead, he chose to bring the kingdom of God to people one at a time, relationally, often by ministering to their bodily, daily, gritty needs. He fed people; he let unclean women touch him; he sat with the mourning and raised the dead so that widows and sisters and mothers would be provided for. And then he forgave them their sins. His acts of mercy recast their suffering and delivered true justice; they went from being outcasts to being a part of God’s redemption story.

And so, when our church talks of mercy, we tie it to justice because each act of mercy, no matter how small, brings God’s rightness into a broken world and into broken lives. Mercy and justice are two sides of the same coin, and that changes what mercy means to our parishioners: mercy is no longer something your grandma says in surprise, or something weak and watered-down. Mercy gains depth; it is the relational heart of God for his creation and his people and the means by which his kingdom comes to earth.

Michael Jordan Laskey is the director of Life and Justice Ministries for the Diocese of Camden, N.J.